A media release was issued on 12 November seeking information about the industry in relation to Australian Consumer Law. The ACCC has received over 1300 complaints about the industry over the last 5 year, and they've finally decided to act.  RV Books has been active in pointing out the shortcomings of the industry, particularly in the area of caravan safety, and we applaud their efforts.

The ACCC have set up two surveys - one for purchasers and the other for retailers.  We encourage everyone caravan owner to respond.  The survey is easy to complete and will only take a few minutes.

Click here to go straight to the survey: https://consultation.accc.gov.au/accc/new-caravan-survey-consumers/

A 43 minute film about their adventure, produced and narrated by Antony Fleming, has been viewed on YouTube more than 1.6 million  times! 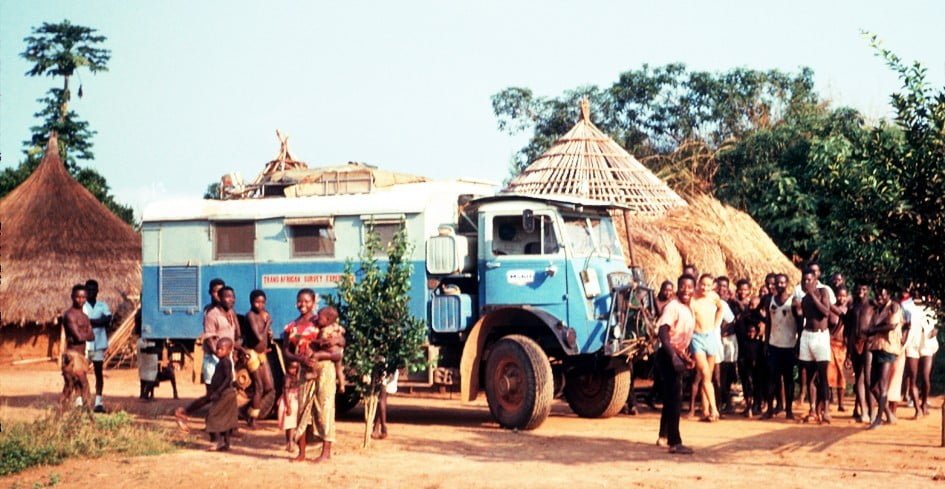 To view the film, and also read Collyn's telling of the tale, just click the button below.

Not currently available as an eBook or paperback, RV Books is publishing The Camper Trailer Book on this site.  Every week new sections will be released until the complete, fully revised, version is available. 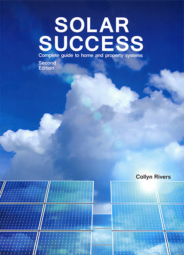 Collyn Rivers is the author of Solar Success. Previously only available on a different website (solarbooks.com.au),  you'll now find this book and a large selection of exclusive articles by Collyn Rivers dealing with the intricacies of setting up and using solar power to run your home, cabin, caravan or motorhome.  Over the next few weeks all of the content from Collyn's second site will be brought over to RV Books to provide a more comprehensive coverage of a wider range of topics.

The number of accidents that involve cars towing caravans is no higher than cars generally, but the nature and physics involved in the now 400 or so a year that jack-knife (with many rolling over) are unique. No other on-road combination has this type of accident.

This article provides information on the number, type and location of RV-related insurance claims in Australia.

Further articles on this website explain how and why these RV accidents happen - and our newly published book 'Why Caravans Roll Over - and how to prevent it' is endorsed by Caravan Council of Australia as 'ESSENTIAL READING'.

We are grateful to the Australian insurance sector, The Suncorp Group and Insurance Australia Group ('IAG') in particular, for providing us with this information. WA's Road Safety Commission has also provided some very useful data.

All state and territory road accident authorities collect data on road accidents, but information relating to RVs, trailers or caravans is not always separately collated. Where this is done, we will seek to include it here.

We are indebted to the Suncorp Group for providing us with the following data. The Suncorp Group (consisting of Suncorp, CIL, APIA, AAMI, GIO, Resilium, Shannons, Vero and AA Insurance) is one of the largest caravan insurers in Australia.

Below is a chart showing the total number of caravan insurance claims made to the Suncorp Group over the last five years. Note that these claims include all claim types, including for example storm damage to caravans whilst parked, as well as claims made during towing: 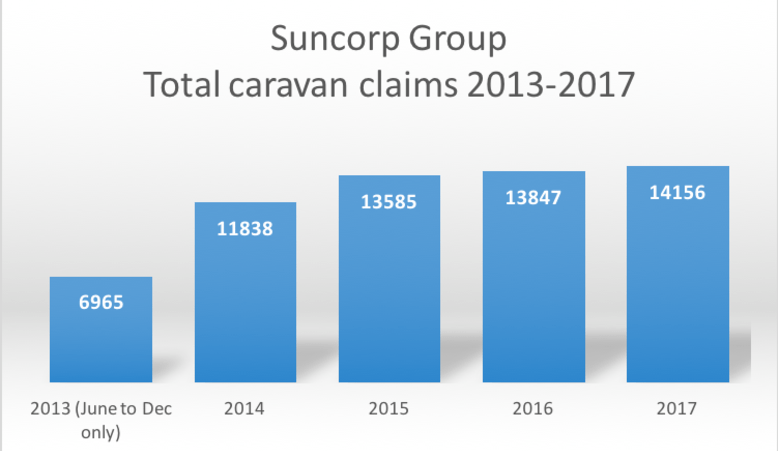 Here is a chart showing the incident location of Suncorp's caravan claims since mid 2013: 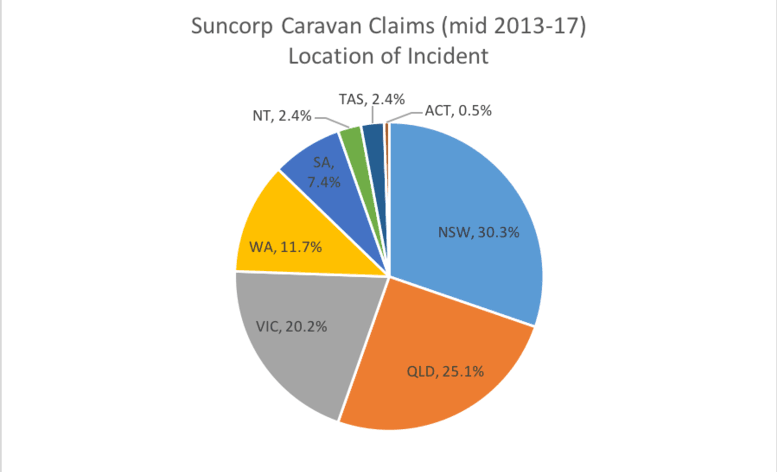 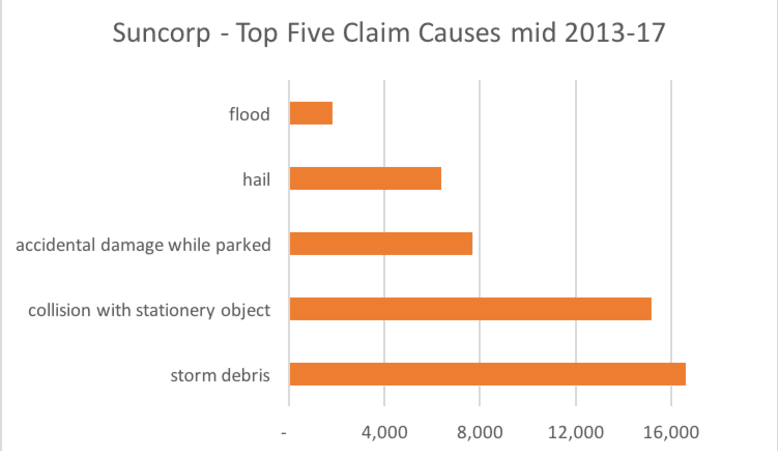 Suncorp's total caravan claims over the last 3 years have increased by around 2% each year. This is less than the 5% increase in caravan registrations over the same period, which would indicate that the number of claims per registered caravan are in fact decreasing.

This claim data includes all claim types including weather-related claims - the top five causes are shown above. There is little caravan owners can do about the weather, but the number of accidental collisions with a stationery object indicates that greater care needs to be taken when moving a caravan either forwards or backwards.

Incident locations seem generally in line with where caravan owners go on holiday. NSW roads are also some of the busiest in the country.

Here is a summary of IAG's caravan collision claims over the last four years: 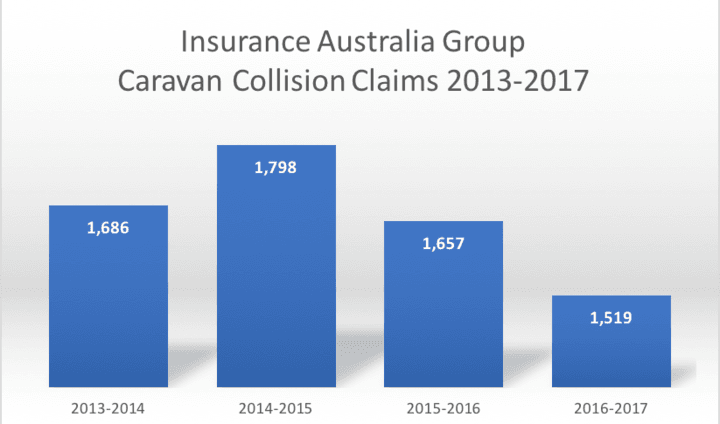 The table above shows a breakdown of the type of collision claims. In terms of definitions:

Other claim types excluding collisions include theft, natural peril damage (storm/ hail/ bushfire etc.) and malicious damage (vandalism). In the last financial year, over a quarter of the caravan claims lodged were primarily attributed to collisions on the road.

At our request, IAG has kindly isolated for us their caravan 'collision' data to allow us to focus on the risks involved in towing a caravan on the Australian road network rather than the risks of keeping a caravan at home or in a caravan.

Consistent with the Suncorp data, IAG's effective claim numbers are decreasing, which is good news.

But within these statistics are some causes for concern. These include:

Together this suggests that, in IAG's case, 89% of collisions, or roughly 1,350 claims in 2016-17, were the result of the driver of the tow vehicle losing control the caravan (because no other person or object was involved) or not driving with due care and attention (because they hit a stationary object).

This would in turn indicate that those towing caravans are more a danger to themselves (and to stationary objects) than other road users.

The significant increase in recent years in the percentage of stationary objects being hit could be due to an increase in numbers of new (and inexperienced) people taking up caravanning. Further research would be needed to test this theory.

The Western Australia Road Safety Commission is one of the few state or territory accident authorities to collect accident data that is identifiable with towing a caravan.

This information is particularly valuable to towing safety research, since it focuses on road accidents rather than general insurance claims.

This data from WA reveals a wide range of interesting information:

We would like to see similar information from other states and territories before making any comparisons, but it will be interesting to see whether WA's reduced 100 km/h speed limit for towing trailers is having any impact on towing safety compared to other states.

This would mean that we are receiving information that relates to about two thirds of the caravan market. Having additional data from the Western Australia Road Safety Commission is a bonus.

Whilst further research needs to be done, our preliminary conclusions from this data are:

We welcome your comments.

END_OF_DOCUMENT_TOKEN_TO_BE_REPLACED

In the 1930s, German archaeologist Wilhelm Koenig claimed that whilst excavating an archaeological dig near Baghdad (Iraq), he uncovered a small clay jar. It had a plug that sealed the opening. That plug had a copper tube with an iron rod inserted into it. If filled with an acidic liquid, the device functioned as a basic battery. Koenig and others made similar versions that generated up to two volts per unit.

END_OF_DOCUMENT_TOKEN_TO_BE_REPLACED

Warning for Potential Caravan Buyers – how to buy a caravan

Potential buyers of caravans need to be extremely careful to ensure that their proposed caravan is, in fact, fully compliant with Australia’s vehicle safety regulations, as stated in the national Australian Design Rules. The Federal government’s Vehicle Safety Standards branch has recognised the problems in the caravan industry. It is introducing a new Road Vehicle Standards Act in July 2021. This Act replaces the Motor Vehicle Standards Act, which has been in force since 1989.

END_OF_DOCUMENT_TOKEN_TO_BE_REPLACED

For decades both caravan owners and vendors have emphasised the need for a laden tow vehicle to at least weigh as much as the laden caravan. Length and caravan stability, and where weight is distributed over that length, is now being seen as more significant.

Want to find out more? Our books cover all these topics and a lot more.

Whether you’re buying your first RV or updating to a bigger, more comfortable rig, there are a great many things you need to know and consider. How to Choose and Buy an RV breaks things down so that you can decide what you want and whether or not what you’ve found is right for you.

Solar That Really Works! explains every detail of designing and installing solar in boats, camper trailers, caravans and motorhomes. 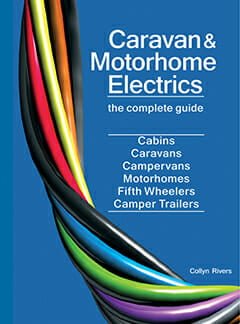 Caravan & Motorhome Electrics covers every aspect of designing, installing and fault finding of the electrics in fifth wheel and conventional caravans, camper trailers and motorhomes.

Caravans and their tow vehicles rarely jack-knife and roll over - but when they do the results are catastrophic. The cause, and how to prevent it, is explained here. Why Caravans Roll Over offers solid advice for keeping yourself safe on the road.
learn more 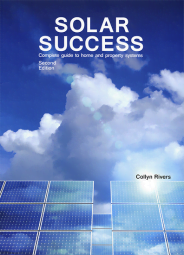 Whether you're buying your first RV or updating to a bigger, more comfortable rig, there are a great many things you need to know and consider.  This book breaks things down so that you can decide what you want and whether or not what you've found is right for you. It's technically sound and comprehensive so that you can proceed with complete confidence.  How to Choose and Buy an RV is the ultimate guide for those times when you want to, well, choose and buy an RV.

Caravans and their tow vehicles rarely jack-knife and roll over - but when they do the results are catastrophic. The cause, and how to prevent it, is explained here.  Why Caravans Roll Over offers solid advice for keeping yourself safe on the road.

Caravan & Motorhome Electrics is the totally rewritten successor to the original globally selling Motorhome Electrics. The book's content now also covers every aspect of designing, installing and fault finding of the electrics in fifth wheel and conventional caravans, camper trailers and motorhomes.

The Caravan & Motorhome Book covers every conceivable aspect of camper trailer, caravan and fifth wheel caravan, campervan and motorhome usage. Like all of Collyn Rivers' books it is technically sound yet written in plain English.

Solar That Really Works! explains, in clear English, every detail of designing and installing solar in boats, camper trailers, caravans and motorhomes. It is up-to-date, valid globally and technically accurate. It is clear, concise and easy to follow without sacrificing important detail.

This is Collyn Rivers' newest book.  Building on his years of experience and extensive knowledge of engineering and all things caravan and RV, this is the book you need with you when shopping for an RV.

Collyn Rivers has done it again! – if you need to know anything about motorhome electrics, then this book is for you... Collyn must be, without doubt, the foremost authority in Australia on this subject.

The Wanderer (Campervan & Motorhome Club of Australia Ltd)
Why Caravans Roll Over....and How to Prevent It​

Collyn is an accomplished engineer who knows how to design and build successful systems. It is refreshing to see practical advice written in plain language when there is so little solar information around. . . this is an essential text . . . you won’t find a better guide.