Was the battery invented over 2000 years ago? The Baghdad Battery remains controversial.

In the 1930s, German archaeologist Wilhelm Koenig was excavating an archaeological dig near Baghdad (Iraq). While doing so, he claimed to uncover a small clay jar. It had a plug that sealed the opening. That plug had a copper tube with an iron rod inserted into it. If filled with an acidic liquid, it functioned as a basic battery. Koenig and others made similar versions that generated up to two volts per unit.

Koenig is variously claimed to have published a paper on the now-called ‘Baghdad battery’ in a 1938 issue of the German journal Forschungen und Fortschritte. That journal, however, ceased publication in 1967. Digitized (alleged copies) were then posted on several Internet sites. However, no evidence exists of anyone claiming to have read the original paper (if one actually existed). 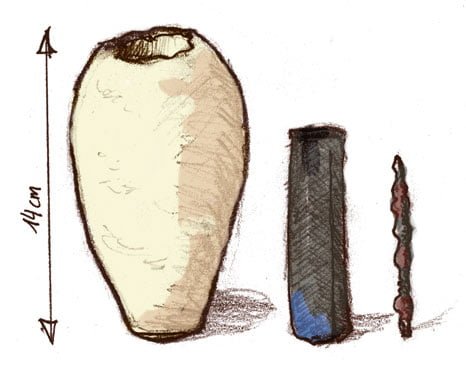 A drawing of the Baghdad Battery

Koenig’s alleged paper resurfaced in the late 1960s following Erich von Däniken’s controversial book: Chariots of the Gods. This book triggered claims that ‘ancient Mesopotamians had developed batteries.’ Furthermore, that those batteries were used for everything from electroplating jewelry, to powering electric light globes inside Egypt’s pyramids and the lighthouse at Alexandria. The book also led to claims that, since the Mesopotamians did not know how to make a battery or use electricity, they must have obtained this information from someone else. Later speculation, however, suggests he read about it in a paper in the Museum’s archives.

Is the Baghdad battery a myth? – what Koenig described

Koenig described the ‘battery’ as being a flat-bottomed clay jar about 5.5 inches tall, a little over 3 inches across at its widest point, and about 1.25 inches wide at the opening. The jar’s neck was broken off, and there were bits of asphalt adhering to the inside of the rim, indicating the opening had been sealed up. Inside the jar was a hollow cylinder made from a thin sheet of copper. The cylinder’s bottom was covered by a small circle of copper sheets sealed into place by asphalt.

A severely rusted iron rod, about 3 inches long, was inside this copper cylinder. At the top end was a plug of asphalt which fitted into the opening of the copper cylinder. The iron rod projected about half an inch beyond this plug.

One clay jar contained a small flask made only of glass. Similar remains had also been found in excavations near Baghdad.

Koenig only suggested these remnants may have been old batteries used for electroplating. He urged that further research be carried out.

This issue then became increasingly improbable. Many ‘paranormal researchers’ took Koenig’s speculation and extended it way beyond what seems reasonable. It was even suggested that technologically advanced extraterrestrials had visited the Earth in ancient times.

Most archaeological studies conclude that the ‘battery’ is simply a (decayed) papyrus scroll. Such scrolls were commonly wrapped around an iron or wooden rod and placed inside a sealed copper tube or glass flask. The now wrapped scroll was then stored inside a clay jar. The jar was then plugged with asphalt to protect it from water and weather.

Koenig’s Baghdad Battery ‘scientific paper’ is hard to take seriously. Some accounts state that Koenig excavated the battery from a site at Khujut Rabu (near Baghdad). Others, however, state that Koenig found the ‘battery’ in storage at the Museum in Baghdad.

Another account suggests the ‘battery’ was found in the ruins of a Parthian (middle Eastern) village dating from 250 BCE. Yet others classify the jar as typical of the Sassanid period – several hundred years later. It is unclear how many ‘Baghdad Batteries’ exist. Most accounts mention just one. Others, however, assert that ten or more have been found.

The object found is a flat-bottomed clay jar. It is about 5.5 inches tall, a little over 3 inches across at its widest point, and about 1.25 inches wide at the opening. The jar’s neck is broken off and has bits of asphalt adhering to the rim’s inside, indicating the opening had initially been sealed.

Inside the jar is a hollow cylinder made from a thin sheet of copper (3.8 inches long and 1 inch wide). The cylinder’s bottom is covered by a small circle of copper sheeting sealed by an asphalt coating. An iron rod (now badly rusted) about 3 inches long is held in place by an asphalt plug. The rod projects about half an inch beyond this plug.

These cylinders, Koenig noted, had been sealed at both ends. Archaeologists later found the cylinders had remains of plant fibers, probably the remnants of papyrus. No iron rods were found with them. There were, however, a piece of bronze rod and three pieces of iron wire. One clay jar contained a small flask made of glass but no metal.

Koenig later noted that similar clay jars with copper cylinders and iron rods had been found in excavations by the Berlin Museum near Baghdad, in sites identified as Sassanid. These other finds seem to have become confused by later writers with Koenig’s ‘battery,’ thereby producing confusion about what culture and period the ‘battery’ comes from and how many were found.

Replicas of the Baghdad’ battery’ have been built by several researchers. They typically produce a small electric current (usually between 0.5 to 2.0 volts).

Koenig seems to have wrongly assumed that some ancient metal objects were electroplated – a process using mercury.

The British Museum’s Paul Craddock, however, advises that ‘examples we see from this region and era are conventional gold plating and mercury gilding.’ He states there’s no irrefutable evidence to support the electroplating theory.

Furthermore, David A. Scott, senior scientist at the Getty Conservation Institute, states: ‘There is a natural tendency for writers dealing with chemical technology to envisage these unique ancient objects of two thousand years ago as electroplating accessories, but this is untenable, for there is absolutely no evidence for electroplating in this region at the time.’

These battery-like artifacts may have been storage for important scrolls. They need to be totally sealed. If exposed to the elements for any significant length of time, papyrus or parchment inside would completely rot away – possibly leaving a slightly acidic residue.

Professor Elizabeth Stone of Stony Brook University is an expert on Iraqi archaeology. She states that she does not know a single archaeologist who believes these artifacts were batteries.

The BBC’s MythBusters program built replica jars to see if they could have been used as batteries for electroplating or electrostimulation. One episode had 10 terracotta jars to simulate batteries using lemon juice as the electrolyte. This activated a four-volt electrochemical reaction between copper and iron plates. The show emphasized no archaeological evidence existed for connections between the jars. These are necessary to produce the required voltage for electroplating. 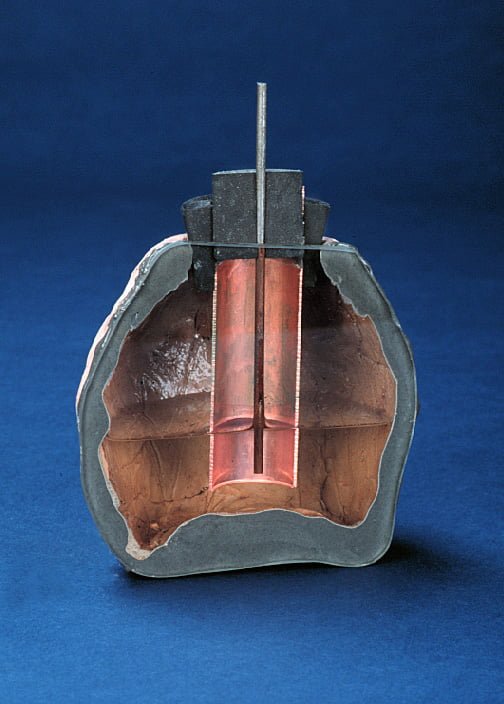 Other researchers, too, built replicas. If filled with an acidic liquid like grape juice, the ‘batteries’ produced a small electric current of between half a volt and two volts. That has led to several speculations about how the ‘batteries’ could have been used.

One is that the ‘battery’ was connected to small iron statues inside temples. If touched by a worshipper, they would produce a seemingly supernatural tingling that would show the gods’ spirits’ power.

It is known that ancient Greek temples used technological tricks to produce effects, such as doors that opened by themselves or statues that moved to awe worshippers. But there is so far no archaeological evidence that this sort of thing was done in either the Parthian or Sassanid cultures.

There are also problems with constructing the presumed battery. To function as such, it would need to be filled with an acidic liquid. This liquid would need periodic topping up, or be replaced. The jars, however, were sealed with asphalt. Moreover, the copper tube on the inside was sealed at either end. Such construction makes it hard to top up the liquid electrolyte.

The presumed ‘battery’ has no terminals and the iron rod projects beyond the asphalt plug. The copper tube, however, does not. It was thus not possible to connect wires to make an electrical circuit.

It has been suggested that such ‘batteries’ were series-connected (i.e., end to end) to produce a high enough voltage for electroplating. Electroplating, however, is done by placing the metal objects in a liquid through which an electric current is passed. Doing so deposits a thin coating of another metal onto the object.

Such metal coating can also be done by mercury gilding. Gilding involves coating an object with a mixture of gold, silver, and mercury. When heated, this causes the mercury to vaporize. That, in turn, deposits a thin layer of bonded gold or silver onto the intended object. All of the gold or silver plated items found from this period, however, show mercury vapor chemical signature. None exhibit the characteristics of electroplated coatings.

Constructing the presumed batteries presents few problems. Clay jars have existed in the area for thousands of years. Asphalt is readily available in the area. Tar and oil bubble to the surface and have long been used for waterproofing. Copper tubes were often used as protective covers for papyrus scrolls. Iron was a common material for the time. There is nothing unique about the materials used. No advanced technical knowledge is needed to build them.

What was the Baghdad discovery if not a battery?

Archaeologists who study the putative ‘battery’ conclude it is simply a now-decayed sacred papyrus scroll wrapped around an iron or wooden rod. It had been placed inside a sealed copper tube (or sometimes a glass flask). This rod was then stored inside a clay jar and plugged with asphalt to protect it from water and weather. The consensus is increasing that the ‘Baghdad Battery’ is not a battery, but more probably a storage jar for a valued scroll.

Nevertheless, the Baghdad Battery continues to be a source of myth and story. The original, allegedly found by Koenig, was said to have been stored in the Baghdad Museum archives. If, however, it existed, its present whereabouts are not known. It was looted from the museum in Baghdad—along with 15,000 other antiquities—in the chaotic (2004) aftermath of the U.S. invasion of Iraq.