Imported RVs – there can be major problems re-registering private imports

Imported RVs – there can be major problems re-registering private imports. Commercially imported RVs are now mostly viable.  Tighter compliance checking, however, shows some private imports are virtually impossible to register. There are also major traps for those buying private imports second-hand. This recently updated article explains why and how. Buyers beware!

Around 2005 it was suspected that many RV imports did not comply with Australian Design Rules and Standards. These included requirements of weight, width and rear overhang. Furthermore, also of electrical and gas compliance. By late 2006 it was suspected that issues were not only non-compliance. They involved falsified weight dockets, electrical and gas certification. Furthermore, there were threats to sue anyone reporting it. The (then) Recreational Vehicle Manufacturers Association of Australia, did. It claimed many did have forged compliance plates. And also approvals. These were (allegedly) used to gain registration.

In 2007 the Australian Federal Government intervened. It warned that some importers make false claims (of weight etc). Furthermore, this was to illegally register overweight caravans and motorhomes. In particular false claim of fifth-wheel caravans being within the 4.5 tonne limit. This warning was mostly ignored. A stronger announcement was made in November 2008. This, reported in Parliament, enabled general publishing. Most rogue traders consequently ceased operating.

Compliance breaches were not widely followed up until 2012. They have been increasingly since. This often arises during a registration transfer. Moreover, particularly if in a different jurisdiction.

Extreme care is also needed if buying second-hand RV imports. Most owners genuinely believe their rigs are fully compliant. Many however are not. This is because the regulations are widely misunderstood.

Australian law enables genuine private buyers to purchase an RV overseas. They may then import it to Australia for their own use. That RV must be modified such that it is deemed safe electrically. It does not, however, have to be 100% compliant otherwise while owned by the original buyer. It must, however, be made 100% compliant before it can be legally sold. This, however, can prove virtually impossible financially or practicably. See Imported RV Electrics.

Electrical compliance is commonly misunderstood by original buyers. Most believe their RV is electrically 100% compliant. Few are. A total give-away is a 110 volt anything. No 110 volt RV or domestic product may be sold in Australia. New or secondhand.

Many sellers seem unaware of legal obligations. With one exception it’s illegal to sell any vehicle unless its 100% compliant. A non-compliant unit, however, can be sold to a dealer. That dealer is then responsible. Prospective buyers nevertheless need to be wary. One dealer (allegedly) liquidated his business to avoid responsibility. He then restarted the day after, under a new name.

Problems compound if the RV cannot be made 100% compliant. It must subsequently be destroyed (literally). Furthermore, it cannot even be given away.

Importing via a ‘facilitator’ can be risky. A facilitator eases transactions. That transaction, however, remains legally between buyer and vendor. Unless the facilitator has formally agreed otherwise, compliance liability is the buyer’s. This is not always made clear. If provable that a facilitator claimed the RV was fully compliant, that facilitator may held legally liable.

Generally, however, facilitation means just that. It eases buying but the legal transaction is still between buyer and seller.

Importers legally resell the products. They thus have a legal obligation to ensure they meet Australian Design Rules (ADRs). The product must also be  electricity and gas compliant). If the product is found not compliant the Trade Practices Act may provide legal relief.

Australia’s RV importers are now believed to be free of deliberately illegal activities.

Many of the larger US fifth-wheelers are intended as low cost housing (not for towing) They are delivered to  trailer parks on semi-trailers. A light undercarriage enables them to be moved around on site. They are not RVs.

Unlike Australia’s, most US roads are flat, smooth and well maintained. Because of this, many US-made fifth-wheelers (intended for towing) have truly basic suspension. Few have shock absorbers. Some appear to be modified trailer park versions. Many have tow hitches that preclude sideways rocking. They are thus unable to rock independently of the tow vehicle. This causes ongoing and structurally damaging forces. This may affect the front of the fifth wheeler. In addition it can damage the hitch mounting and tow vehicle. 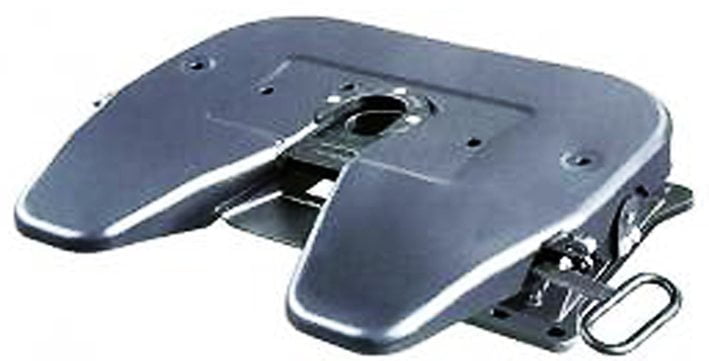 Many earlier imported fifth-wheelers have such hitches. So did some locally built fifth-wheelers. Particular care is needed if considering buying one for any but non-mobile use. Have a certified engineer check for cracking and/or metal fatigue. This is particularly needed around the frontal hitch area. Such issues also damage tow vehicles. The stresses tend to tear hitch receivers off their mountings.

All electrical and gas appliances (and their installation) must fully comply with Australian Standards. These are, for the electrics: AS/NZS 3001:2008 as Amended in 2012. For gas: the latest version of AS/NZS 5601 (part 2). A licensed electrician and a licensed gas fitter must inspect and certify every imported RV.

Forgery and falsified certifying are known to have been involved with some imports Even those already certified may thus have to be re-certified when seeking re-registration. This may not be possible.

Clause 44.8 of the Australian Design Rules relates to motorhomes, conventional and fifth wheel caravans. Item 44.8.1 notes that many fifth wheelers and motorhomes imported into Australia have only a door on the right-hand side. That required is only outward opening, or sliding doors of which at least one must be on the left-hand side. Or at the rear.

ADR 44.8.2 relates to gas fired furnaces. Many imports have gas-fired furnaces for internal heating. These do not and cannot have Australian Gas Compliance Certificates. It is illegal to use them in Australia. The relevant standard is now AS/NZS 5601.2.2010 as Amended. (The Truma gas fired heating furnace, available in Australia from Dometic, complies).

44.8.3 Fire Extinguisher. Motorhomes and ‘Caravans’ shall (i.e. must) be provided with a fire extinguisher(s) selected and located in accordance with the Australian Standard.

Commercial imports must comply with, or be modified to comply with, all Australian ADRs that were in force at the time the vehicle was manufactured. Some ADRs are the same as the US Federal Motor Vehicle Safety Standard. Others are different. Moreover, they are generally more stringent. It can be very costly to modify non-complying vehicles to comply. All must be certified by an accredited automotive engineer.

RVs older than 15 years can be brought in via the ‘personal imports’ scheme. This requires proof that the owner has owned and used the vehicle overseas for a continuous 12-months. Such vehicles need not to comply with all ADRs. They must however be modified to comply with some regulatory requirements. Obtain written quotes from Australian conversion companies before proceeding.

At the time of updating this Article (2020) re-registration of such RVs still varies slightly from state to state. It is progressively becoming uniform.

A few buyers claim to have imported RVs painlessly. While this may be true, they may have only obtained an electrical Connection Certificate that enables the original buyer (only) to use that RV. That Certificate rarely implies full compliance). Full compliance, however is obligatory for imported RVs legally to be resold.

Some buyers have imported only one RV, but nevertheless assume their experience is normal. Others however have non-compliant private imports. Some (I am aware of) have, despite all efforts, been impossible to register. One cost over US$200,000.

Non-compliance can often be spotted in seconds. If, for instance, the RV has any 110 volt appliances it cannot be compliant. This is because it is illegal to sell any 110 volt domestic appliance in Australia. Some may have a Certificate of Electrical Compliance in spite of retained 110 volt wiring. In particular, they may lack the obligatory double pole socket outlets. Even if a Certificate of Electrical Compliance is provided it pays to have a certified electrician to check.

Over-width is another common problem. Many US RVs are slightly too wide. If so, that is virtually impossible to fix. There often a problem with over-wide full length awnings. These, however, can often be removed.

If it’s intended to keep an RV for all its usable life, importing privately may make sense. For most, however, it makes more sense to buy via a long established importer. Or stay with locally-made products.

The legal requirements are also covered extensively in the author’s Caravan & Motorhome Book. That of the electrical requirements are in Caravan & Motorhome Electrics. My other books are the Camper Trailer Book, Solar That Really Works (for cabins, caravans and motorhomes) and Solar Success (for home and property systems). For information about the author please Click on Bio.