Is Caravan Independent Suspension Essential? – the answer is no.

Is Caravan Independent Suspension Necessary? Or is a marketing issue? It is not an engineering issue. As this article explains, travel trailer beam axles are generally better.

Until 1930 or so most cars had beam axles (typically leaf sprung). A US-led wish for softer suspension, however, caused an unexpected effect.

As one or other wheel of a softly sprung beam front axle rises or falls over undulations it causes the often fast-spinning wheel to rise and fall in an arc. That wheel acts as does a gyroscope. It attempts to swing sideways. As the front wheels are connected by a horizontal track rod, if one rises in an arc it causes the other turn likewise. If not adequately dampened, this so-called gyroscopic precession builds up alarmingly. The front wheels swing violently from lock to lock. They also tramp up and down. This is related to speed – and became increasingly serious as cars became faster.

It was realised that this issue is inherent with beam axle located steered wheels. It was also realised that it can only be fully overcome by having the wheels rise and fall vertically. And independently. US engineers seemed unaware that Lancia had been using independent front suspension for a long time. A few other had too: Lanchester around 1900, and Morgan a year or two later.

As with a travel trailer‘s, beam axled car rear wheels are subject to similar forces. As they are not free to swivel, however, there are no unwanted effects. Hence many to this day (particularly 4WDs) retain beam rear axles. 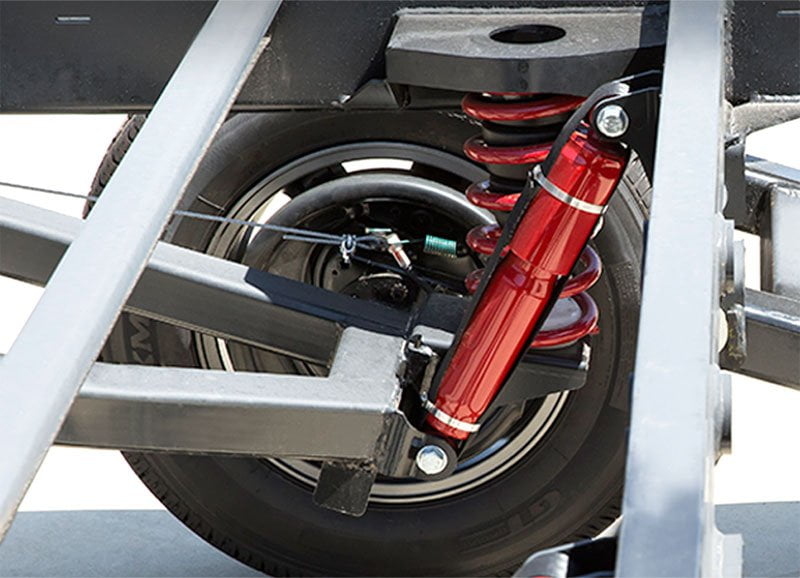 For reasons that relate mostly to marketing, Australian caravanners are led to believe that caravan independent suspension is essential. The opposite is closer to reality. For travel trailers the type mostly used (trailing or leading arms) has a major downside.

Effect on the centre of gravity

The major issue now is that the centre of gravity is at much the same height as with as a beam-axled travel trailer. That trailing arm suspension, however, introduces a considerable lever effect (Moment Arm) adding to that sway. This effect is even more so at the extreme rear. A pair of high slung spare wheels weighing (say) 80 kg (175 lb) has an effective mass of many times that weight. (The effect when swaying is not unlike a camel bending both legs on the same side.)

Further, a travel trailer with trailing arm suspension does not roll as such. It rolls around a diagonal axis that is at tow ball level (and centred) at the very front that causes it to sway around the ground level at its wheels. The centrally located hitch also causes it to adopt a duck-like waggle as it sways.

Because of this effect side forces cause a trailing arm suspended travel trailer to sway to a far greater extent. This may not be noticed in normal driving but becomes only too apparent in excess cornering speed, an emergency swerve, or air pressure forces from a passing truck.

Apart from trivial tyre depression a beam axle travel trailer‘s chassis always remains vertical to the surface. When a side force is applied the sprung mass rolls around an axis that is about the same height as the tow ball. There is thus very little lever effect (Moment Arm) to increase the effect of roll forces.

The Al-KO trailing arm suspension introduces a similar effect but as it has far less movement the sway is minimised. Such sway can be avoided by using the horizontal arms (as on the front of most cars) – or by using two pivoted full-width beams as in the Track Trailer TVan. But all take up needed central space.

The ideal beam axle travel trailer suspension needs to be similar in concept to that of the front of the superb 4.2 litre TD Nissan Patrol: a few DIY camper trailers actually use that (with a light beam axle). It is essentially a properly located hollow section (or I beam) axle with well-damped coil springs or airbags.

Sadly, however, little work is done in Australia to develop properly engineered beam axle suspension. Most use far too short stiff leaf springs intended mainly for garden trailers. There is one exception but its spring leaves are really too short for travel trailer use.

As a result, many locally-made travel trailers have soft long-travel suspension that mainly deflects when least needed i.e. whilst swaying. Many have dual shock absorbers per wheel – yet towed by 4WDs that cope adequately with only one per wheel.

Building your own ideal suspension

The simplest way is to use the rear leaf springs from a Nissan Patrol or Hilux, minus a leaf or two, and a proprietary hollow section steel beam axle (or I beam). Use also the associated shock absorbers. The spring deflection should be such that (prior to the shock absorbers being fitted) the laden travel trailer should bounce on its springs at about twice a second. Given the correct weight distribution etc. you will find it tows like a dream.

My Caravan & Motorhome Book goes into this at greater depth.

If you find this of interest please Link to it on appropriate forums – and do please tell your friends to read it.