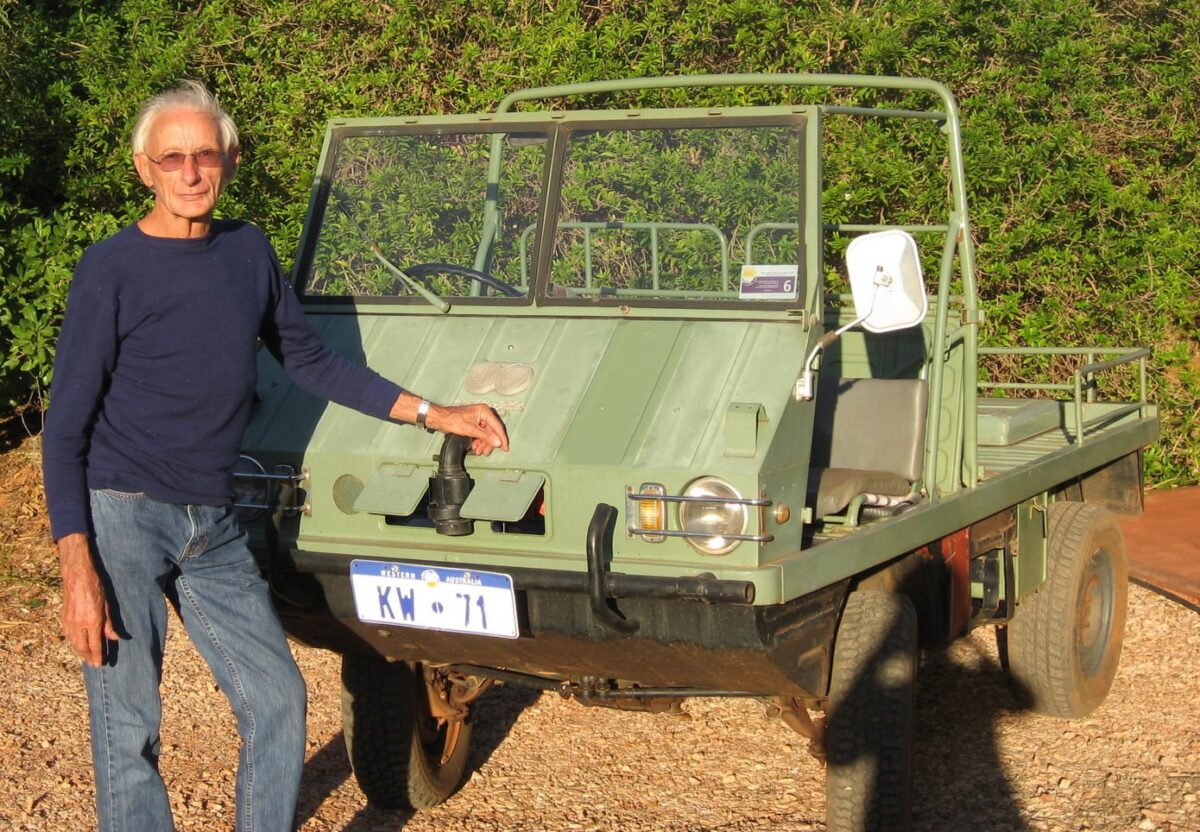 The tiny 4WD is a now rare 1970s Haflinger. The Austrian-made 4WDs are arguably the most capable 4WD yet made. They weigh 700 kg (1540 lb) and can carry 750 kg (1650 lb) of fully armed soldiers up the side of an Alp. The rear-engine is a twin cylinder adaption of a four cylinder Porsche.

Collyn Rivers joined the RAF at the age of 17 and was trained as a ground radar engineer. He left the RAF in 1951 - as one of the few people who understood the then early electronics. He was soon employed by de Havilland Propellers to work on guided missile power systems. After three years he moved to the (General Motors) Vauxhall/Bedford Research Laboratory. There, he designed and built electronic measuring equipment mostly related to truck suspension. He also assisted in solving manufacturing problems. 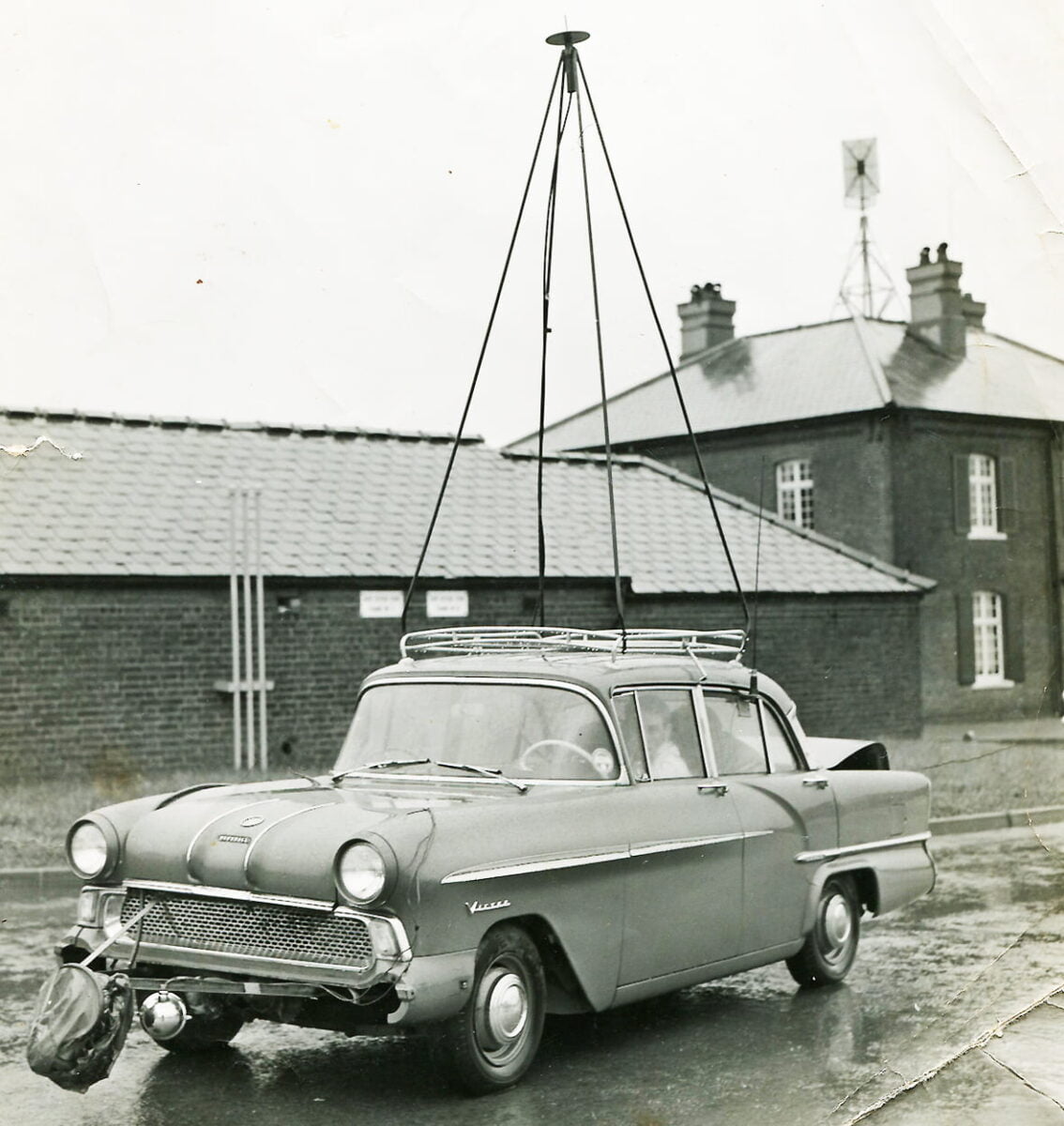 This left-hand drive 1954 Vauxhall Victor (driven here by Collyn) was used to study suspension effects. The laboratory designed and made TV link transmitted the signal to the antenna on the farmhouse roof. The system, powered by a petrol electric generator in the boot, resulted in rumours of a rear-engined Vauxhall!. It was driven on the road (on trade plates). Great care was needed to avoid power lines as that antenna was as high as it looks.

Between 1959 and 1961, in conjunction with GM and Mobile, Collyn Rivers drove a big 4WD QL Bedford twice across Africa - including two Saharan crossings. The main purpose was to study track surface conditions. Collyn winches the Bedford upright after it almost falling on its side. Pic by Tony Fleming.

Collyn Rivers moved to Australia in 1964, where, until 1968, he designed everything from X-ray scanners to 500-tonne concrete presses. He then became Applications Engineering Manager of Natronics Engineering, for two years.

In 1971 Collyn Rivers switched careers completely to found (in Australia) what, by 1976, he developed into the worldwide magazine Electronics Today International (ETI).The magazine had local editions in seven countries, including Canada and Indonesia. By 1976, ETI became the world’s largest electronics magazine. In that same year it was awarded the title of ‘Best Electronics Publication in the World’ by the Union International de la Presse Radiotechnique et Electronique. See (http://en.wikipedia.org/wiki/Electronics_Today_International). Collyn subsequently founded and published over twenty other publications in electronics, computing, music, and telecommunications - including the prestigious Australian Communications.

From 1982-1990 he was (under contract) the technology editor of Australia's oldest journal, The Bulletin. In this, Collyn Rivers covered virtually every aspect of technology. He did likewise in Australian Business. In 1986, he wrote the Federal Government’s Guide to Information Technology, and also the NSW Government’s textbook for its electronics pratique syllabus. Collyn’s current books include Caravan & Motorhome Book, The Camper Trailer Book, Caravan & Motorhome Electrics, Solar That Really Works!, and Solar Success (for home and properties). Most are now in their second or third editions. His all-new Caravan & Motorhome Book was launched in February 2016 (it took five years to write).

Collyn Rivers has maintained a now 55 year interest in vehicle suspension. His particular interest is the complex interactions between travel trailers and their tow vehicles. His writing in this area (since 2002) at popular and technical level has attracted academic and general interest worldwide. He has plans for fully referenced papers in this field and possibly a technical monograph in digital form.

The author and his (Finnish-born) child psychologist wife Maarit, later travelled extensively in out-back Australia (in their OKA). This included crossing from their then home in Broome across the Centre via dirt tracks - to Sydney over twelve times. 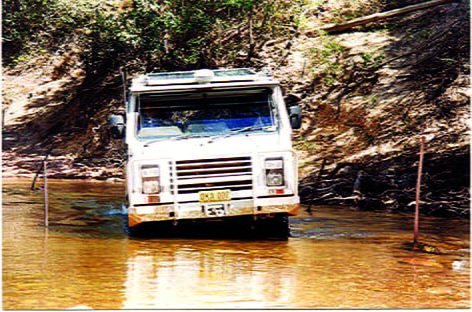 Maarit bringing the OKA across the Wenlock River on the track to Cape York - in 1999.

They later switched to a Tvan and 4.2 litre Nissan Patrol. Whilst in Broome, Collyn and Maarit owner-built their own all steel, concrete and glass home on their Indian-ocean frontage 5 hectare block. The home was not only solar-powered - it was owner-built using virtually none but solar power - from a 3.4 kW system that Collyn first designed and built.