My wife and I self-built our all solar house in Australia’s far north in 2001. While we no longer live there, it is still (2020) beautiful and practicable. Living with solar alone is 100% possible. Here’s how and why. 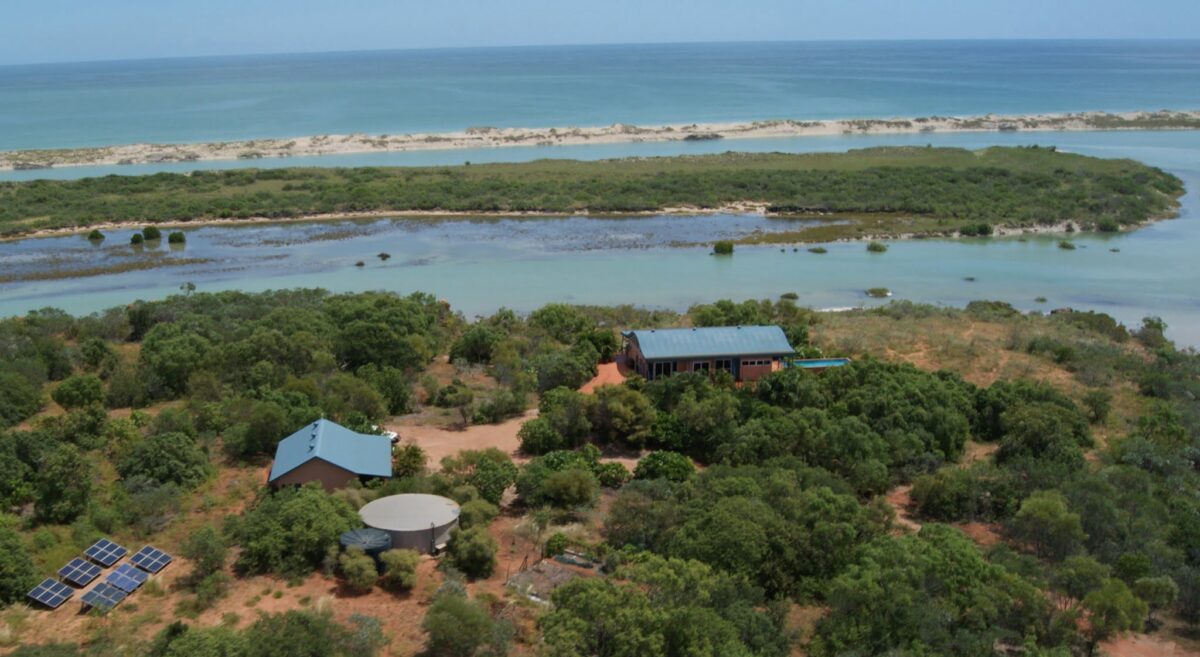 The upper third of the 10-acre block. The solar array for our all solar house is bottom left of the photograph. Pic: rvbooks.com.au

Apart from bore water, the 10 acres (of Cable Beach frontage) had no services. Using hi-tech materials and techniques, however, enabled me and my wife to self-build a beautiful and totally practicable living space. Plus extensive irrigation.

The land at Ngungnunkurukan (known as Coconut Well), is 21 kilometres north of Broome – one of the world’s most isolated towns. Broome’s nearest city is in Indonesia. It nearest in Australia (Darwin and Perth), are both over 2000 km away. The 12,000 or so population is over 50% indigenous.

The land directly adjoins the route of one of three major Aboriginal songlines traversing Australia. Moreover, it also has major rock formations significant to the local Yarwu community.

Original bush and sand dunes front directly onto a tidal lagoon. Furthermore, the Indian Ocean is a mere 400 metres away.

Knowing the significance, we followed the traditional owners’ wish to protect rocks and significant trees. And, at the same time, to restrict access to a sacred part of the site. That part was welcomed! It’s a breeding area for King Brown snakes.

We attempted, also, to avoid heavy earth-moving machinery being close to that area. In addition, Broome Shire and the local fire authority allowed obligatory fire trails to detour around such areas.

We moved onto the land in April 2000. Cyclone Rosita struck ten days later. We buried our ultra-strong OKA off-road truck to its chassis and also strapped a table across its windscreen. This gave shelter against the subsequent 180 km/h plus wind.

Whilst scary, that cyclonic wind caused us to upgrade the engineering. Furthermore, we added a virtually indestructible cyclone shelter. It’s rarely needed but provides visitors with a truly strong bedroom.

All solar house – our main requirements

Our main requirements were light and space. And visually, to link the ocean in front to the virgin bush at sides and rear. The original concept was good. Nevertheless, as an engineer myself, it was clear the designer’s structure was far from adequate. It was subsequently and brilliantly re-designed by Garry Bartlett of B&J Building Consultants (in Broome). B&J also fabricated the massive steel mainframe.

Despite its complexity, the all-steel framework was erected in one (12 hours) day. The diagonal steel tubes add strength. They also double as water drainage for the gutters. The Pindan soil really is this colour. Pic: rvbooks.com.au

The house’s superstructure is closer to an arched steel bridge than a house. It’s structural engineering – not traditional building. It is almost entirely concrete, steel and glass. There is not a single mud-brick, straw bale, or any but non-structural timber in it! It is also rare in having a ceiling 4.3 metres high at its centre. Apart from its roof, the exterior is almost entirely cyclone-proof toughened glass sliding doors. Each has slide-open stainless steel security mesh. There are no full-height internal walls, only a couple of 2.0 metre (6 foot) high partitions.

The all solar house’s main strength is its double curvature roof! This is fabricated from heavy gauge Colorbond steel. It is secured by 14 gauge Tek screws. In addition, it has cyclone washers at every channel. Furthermore, the purlins are welded to massive curved RSJs (rolled steel joists). A similar Colorbond ceiling likewise attaches directly to the purlins’ undersides. The whole forms an immensely strong, but nevertheless light, beam.

The roof is tied down by forty steel posts. Each is 100 by 100 mm square. The posts are bolted to a 600 by 600 mm reinforced concrete perimeter beam. Diagonally located 150 mm diameter (and 20 mm thick) steel tubes provide further support. They also double as rainwater down-pipes.

The all-steel structure demanded tolerances of only a few millimetres. This is closer to watch-making than builders’ typical plus or minus a centimetre. Or three. The 400 mm perimeter (40) beam’s needed placing within two to three millimetres. Surprisingly, it worked. Furthermore, the 150 m² structure is within five mm² across diagonals.

Building the all solar house

When it came actually building, we found that no local builders were willing to assist. They seemingly felt it was closer to bridge-building than house building. This was not, however, a major problem. I (Collyn) was originally an engineer. My now-psychologist wife (Maarit) acquired welding and production-engineering certificates at Broome TAFE. She also (and usefully) became a certified venomous snake handler.

We had contractors pour the 300 mm thick concrete floor. B&J assembled the huge steel frame – assisted by a 200-tonne crane. Even at that capacity the crane consequently worked hard. It had to position the massive steel beams at its full extension of over 40 metres away. We had contractors install the Colorbond roof and ceiling. Likewise, internal plumbing and 230-volt ac wiring.

To enable mainly solar to power even the construction, I arranged that first. I designed an initial 2000 watt system that I located on the roof of an existing shed. It had about 45 kilowatts of battery storage and an inverter that could cope with an 11-kilowatt peak draw. The array was later expanded and moved closer. It still (2020) provides a reliable 3.4 kW – and about 18 kWh/day most year-round.

Building started building in earnest in August 2000. We moved into the (semi-completed) but already all solar house by Christmas. 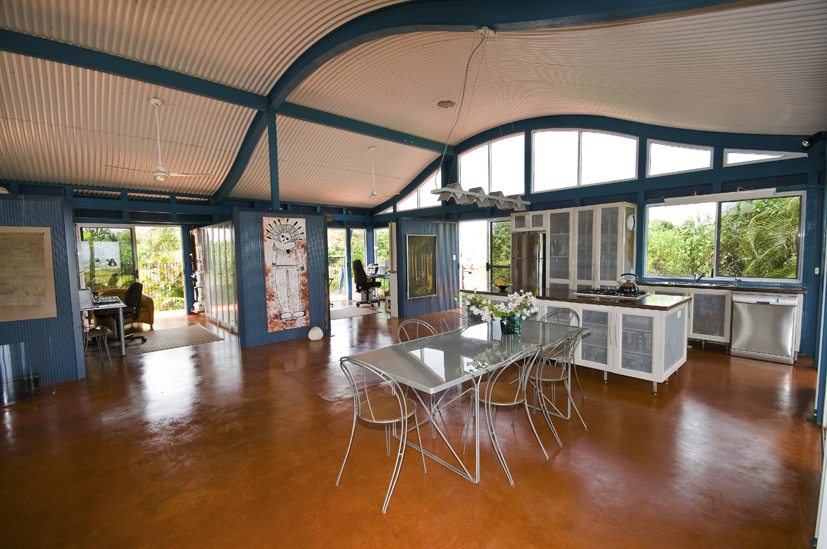 There are no full-height internal walls. The floor is ochre-coloured polished concrete. Pic: rvbooks.com.au

Powering the all solar house 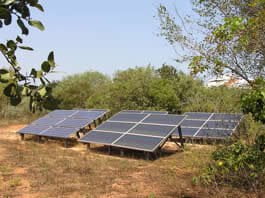 The main solar array. A further bank (of six modules) was added just after this 2005 pic was taken. Pic: copyright rvbooks.com.au

The solar system initially puzzled contractors. They knew the closest power lines were 20 km away. But here was 230 volts at considerable wattage. It was initially hard to persuade them it was from solar. 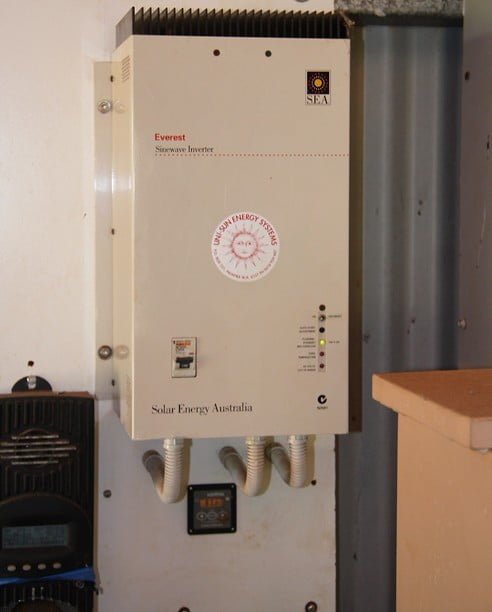 The original batteries were flogged to death by a caretaker. They were consequently replaced by sixteen 12-volt gel cell batteries. Each was 235 amp-hour. An 80 amp Outback Power regulator controls charging. 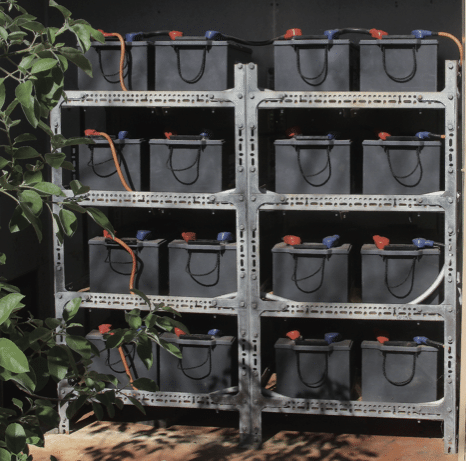 Indian-ocean cooled air is drawn into the house via its usually open but fly-screened doors. The air is subsequently extracted via roof vents. Air-conditioning was deemed unnecessary. A cool ocean breeze usually develops by midday year-around.

As LEDs were not available back then, lighting was all via compact fluorescents. Ample power was available to drive them. Had we built later, however, we would have used LEDs throughout the property.

Despite excellent bore water, the house uses rainwater – even for toilet flushing. The 280 square metre roof has two deep and wide stainless steel gutters. These are inset between the roof and the ceiling for cyclone protection. Water flows via diagonal bracing tubes to sunken 200 mm pipes. These fill a 14,250-litre holding tank that captures torrential seasonal rain. The fall is so heavy the tank fills inside an hour. The water is then pumped to the main 100,000-litre tank.

Water is supplied to the house by a pressure pump and 500-litre water pressure tank. The pump replenishes the pressure tank once or twice daily. It is silent and efficient, moreover running only twice a day for a few minutes each time.

Swimming pool for an all solar house

Quotes for the pool’s circulation system were around $60,000. Finding them based on traditional technology, we designed and built our own. It cost a mere $7500 (in 2002.) This, as with all the house and property, runs from solar alone. Lorentz Badu pump after seven years. It runs on 40 volts dc, pumping about 35,000 litres a day from four 120 watt solar modules. (The apparent rust is the Kimberley’s Pindan sand. It stains everything it touches).

A 480-watt solar array directly drives a Lorentz 48-volt brush-less DC motor pump. No batteries are needed. The pump accepts a wide range of voltage, so no solar regulator is needed. As a result, water circulates all day under the Kimberley’s typical all-day sun.

No chloride is used. Irrigation water first passes through the pool. It effectively replaces about 10% each day. 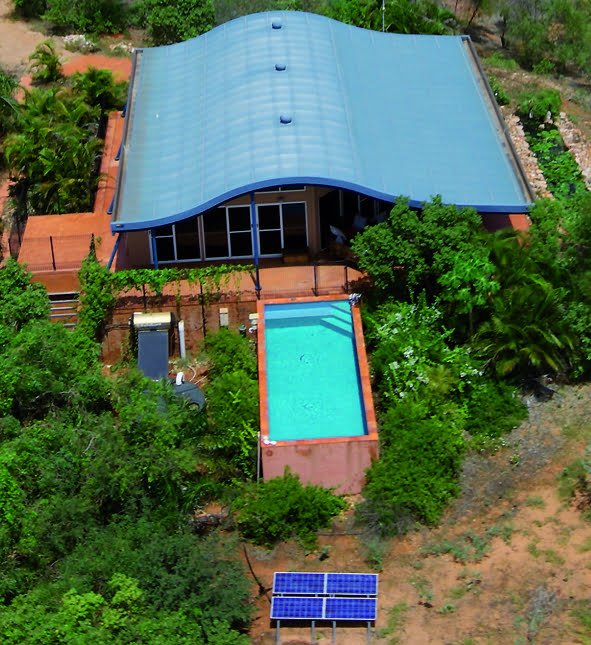 Crystal clear water. A 48-volt dc pump is powered by the four 120 watt solar modules seen here. It runs all-day. The house’s inset gutters can be seen here. The protruding section (left) is an ultra-strong cyclone shelter. (Full details of this pool are in Solar Success.)

The crystal-clear bore water is among the world’s purest. It comes from the King Leopold Ranges – 700 km north-west. The land in between is totally untouched. We used only 2% of our allocation, 98% consequently pours into the ocean.

Sewerage is septic. We would have preferred a more ecologically viable system but, notwithstanding, Shire regulations prevented it.

Broome Shire otherwise cooperated totally. It rejected the original plans as cyclone protection was inadequate. But that confirmation was nevertheless welcome. I’d calculated that too. The upgraded specifications were done by the then-mayor – he was a structural engineer.

Not all worked as hope. One downside, for example, was the kitchen. Built locally, it’s very poorly made. ‘Call yourself a cabinet maker’, said Maarit to one. ‘You’re not even a half-competent bush carpenter.’ 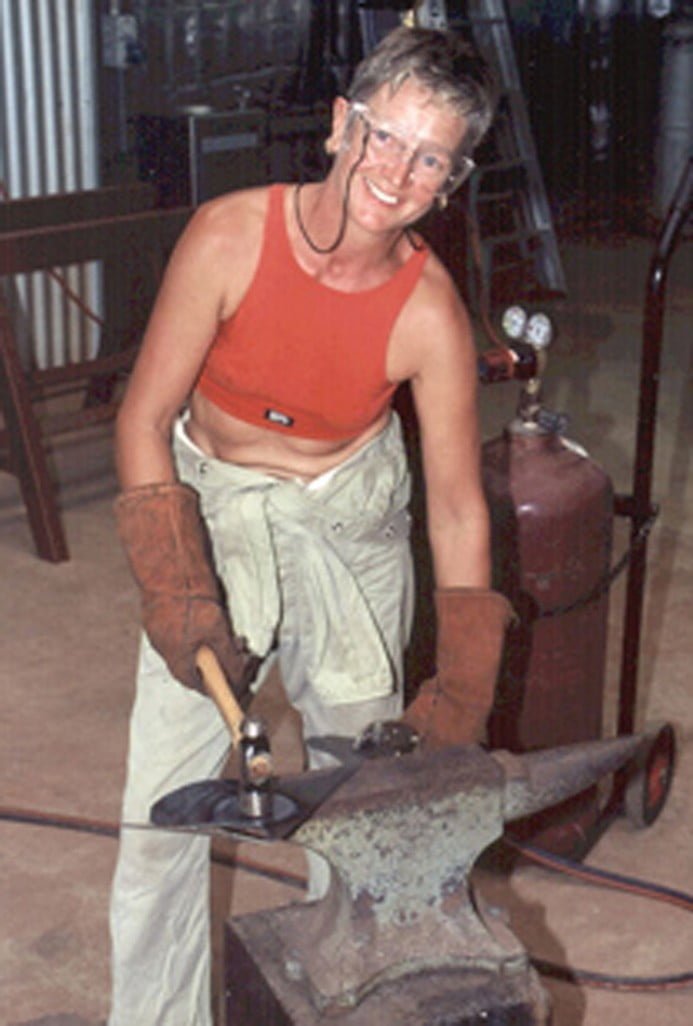 A time to move

We later needed to be closer to our rapidly expanding Sydney family. Reluctantly, we sold the property in 2010. A visit in 2019 however, showed that, apart from new batteries, all still worked well.

Our home (in Church Point) has subsequently become an all solar house too. It has a 6.4 kW system with Tesla 14 kWh battery back-up. On most days it produces far more than we use. The surplus is fed into the grid under a two-year contract at 20 cents per kW/h.

A 6.4 kW solar system supplies all the three-story home’s needs plus. Pic: rvbooks.com.au

Fuller details of the Broome’s solar, swimming pool, water pumping are in my book Solar Success.

It is totally feasible to build an all solar house. That book shows specifically in detail how to get it right first time.

Click here for a full index of my articles in this and other areas. Bio.