You can make RV solar and alternator charging work. It is complex on post-2014 vehicles. This ongoingly updated article explains how. A caravan or motorhome battery charges by connecting it across it a source that has a voltage that is higher than that battery has at the time. That battery neither knows nor cares whether that charge is from one source or several. Those sources must all be of closely similar voltage. Ideally, they are identical. If not, the battery will draw mostly from that with the highest voltage. Charging becomes complicated, however, once the battery/s approach full charge.

What happens then is that the controllers associated with each charging source mistake each other’s voltage for the battery. This may cause damaging overcharging. This is particularly so with AGM and LiFePO4 batteries. This applies also to simultaneous solar and generator charging. Do not attempt to do this yourself unless you know how. This explained in our book Caravan & Motorhome Electrics.

Prior to 2014 or so, vehicle alternators produced about 14.2 volts for some minutes after engine starting. This dropped to a more or less fixed 13.6 volts thereon. This, by and large, presented no issues for RV battery charging. Such alternators had a high enough voltage to charge a secondary battery in the vehicle to a usable level for leisure or auxiliary use. Ongoing emissions regulations however require minimising power usage. This (in 2014) extended yet further – to vehicle alternators of variable voltage.

Variable voltage alternators have their output voltage and current be based on the vehicle’s operating conditions. This reduces the electrical load (and hence) fuel-consuming mechanical load on the engine by varying the alternator’s voltage and current. That voltage may vary from 15 volts (one reaches 15.4 volts) and typically a low of 12.5 volts. But a few go to zero volts. All are controlled by the vehicle’s central Engine Control Unit (ECU).

The main problem for RVs with variable voltage alternators is that their priority is to ensure the vehicle’s starter battery (now known as the ‘main’ battery) is fully charged. This is typically achieved within five minutes of starting.  At that point the ECU causes the alternator to drop to a typical 12.5 or so volts. This reduces the load on the engine and hence fuel consumption and vehicle emissions. That 12.5 volts is not only far too low for the RVs’ auxiliary battery to charge, but the voltage sensitive relay (VSR) disconnects that auxiliary battery anyway.

The reality is that a variable voltage alternator almost totally precludes using any previous battery charging systems from charging an RV auxiliary battery.

Currently, a small number of major manufacturers produce specialised RV chargers that cope with variable voltage alternators. Virtually all also accept solar input. Googling ‘variable voltage alternator chargers will bring up details of many now such products. Be aware these are complex units and require expertise to install. The manufacturer will be able to advise a suitably qualified installer.

How to know if I have a variable voltage alternator?

Virtually all new vehicles now have variable voltage alternators. A simple way to know is to open the bonnet and look at the vehicle’s starter battery. 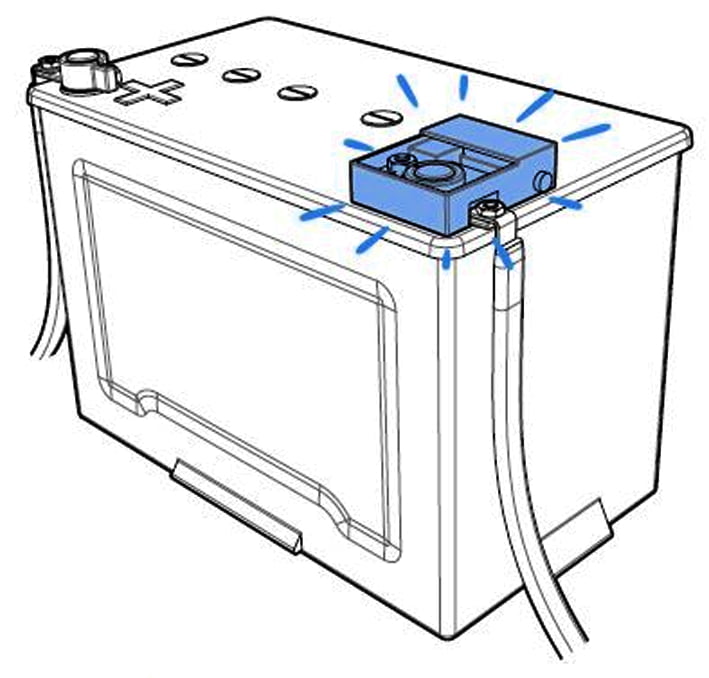 If the starter battery has a module mounted on (or close to) the battery terminal (usually the battery negative) it is all but certain that you have a variable voltage alternator. Pic: Redarc.

How to know more

Our books, Solar That Really Works! and Caravan & Motorhome Electrics explain all.