Reducing travel trailer sway – here’s how to minimise the causes

Reducing travel trailer sway (yaw) necessitates minimising its causes – and only then adding devices promoted as reducing it. This article shows why and how.

When a travel trailer yaws in one direction that overhung hitch causes (not just allows) the tow vehicle to yaw in the other direction. Pic: rvbooks.com.au

If, however, swaying (without an anti-sway device) does not cease within two to three cycles, its cause must be found and fixed before adding any sway damping device.

In this connection, a survey (on caravanners forum) shows that just over half of all caravanners grease their tow balls. This may save long-term tow ball wear – but substantially reduces what is otherwise useful damping. A far better approach is to use AL-KO’s friction-added tow ball. 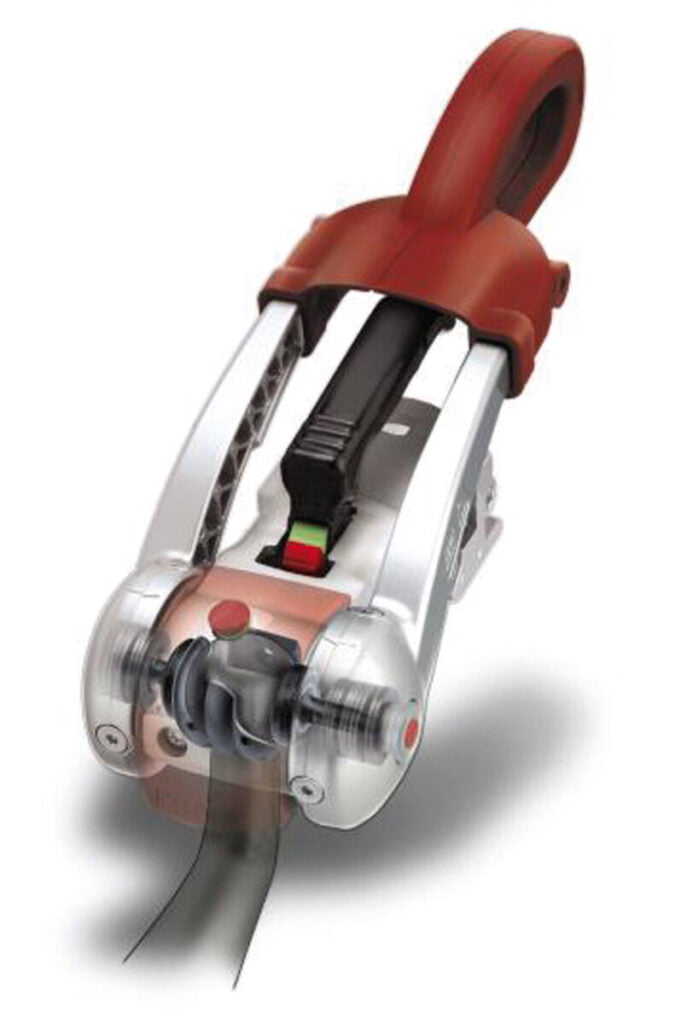 Friction is a constant force. Travel Trailer sway forces, however, increase by the square of the speed. Thus, while effective to about 60 km/h (37.5 mph) at 100 km/h (62.5 mph) most have a frictional and practical effect of less than 1%. They are thus effective at low speed but close to useless at high speed.

UK/EU travel trailer makers know and accept this. Their approach is to use friction damping for low/medium speed damping. This is reinforced by AL-KO/Dexter electronic stability control system at higher speeds (towing speed limits in the UK, and most of the EU, however, is only 80 km/h). USA drivers tow at higher speeds but usually with far heavier and longer tow vehicles.

The friction damping plus AL-KO Dexter approach will work well with most Australian-made travel trailers. All such devices, however, ultimately depend on the maintained grip of hand-sized patches of rubber (i.e. your tow vehicle and travel trailer‘s tyre footprints) to control 2000-3500 kg (4400-7715 lb) of a possibly violently-swaying travel trailer.

Average tow hitch overhang (distance from the rear axle to the tow ball) of Australian vehicles is 1.24 metres.  If your tow hitch has excess overhang, have a machine shop drill a new hole accordingly. Even a centimetre is worth saving. Utes with extended chassis and/or tow hitches are thus at major risk.

It helps to have a (laden) tow vehicle heavier than the laden travel trailer. Be aware, however, that with travel trailers, it is their length, and where weight is distributed along that length that primarily affects the tendency to sway. Furthermore, the longer the travel trailer, the lower its safe towing speed.

With long travel trailers (i.e.) over about six metres (approx 20 ft) have all heavy items as close as possible to the axles. Never load anything heavy at their extreme rear. It is not clever to have spare wheels on a travel trailer‘s rear wall. Their actual weight there maybe 40 kg (88 lb) or so. Their effective weight, however, is plus 120 kg (265 lb). If your travel trailer has them there, relocate them in a slide-out cradle underneath the travel trailer‘s floor. 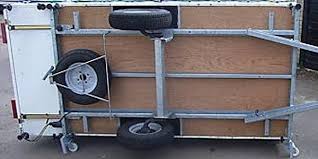 Load all heavy items as close as possible to the travel trailer‘s axle/s. Never at the far ends.  Or (and preferably) in the tow vehicle. Always load that tow vehicle to its legal maximum – the heavier it is the better.

Travel Trailer sway is primarily reduced by the frictional grip and part molecular grip of the tow vehicle’s rear tyres. Also, but to a lesser extent, that of the travel trailer‘s tyres. That grip is enhanced by stiffer tyre side-walls. It assists to use Light Truck tyres (also known as ‘C’ rated) for both tow vehicle and travel trailer. These tyres will cause a slightly harsher ride, but that’s a small price to pay for safety.

The effect of a weight distributing hitch (WDH)

A weight distributing hitch is an (optional)  semi-flexible springy beam between travel trailer and tow vehicle. Its purpose is to restore some part of the imposed tow weight on the tow vehicle’s rear tyres – to its front tyres.

Until 2016 or so, most locally-made travel trailers had a recommended (and desirable) tow ball mass of about 10% of the laden travel trailer‘s weight. Some still have. Many tow vehicle makers, however, have reduced their permitted tow ball loading. It is now typically 250 kg (550 lb) or less. Then, inexplicably without making any apparent physical changes, some local travel trailer makers then reduced recommended tow ball mass to as low as 4.2%.

Low tow ball mass increases the probability of non-self-correcting sway. RV Books can (legally) only suggest owners follow the makers’ recommendations. It certainly does not, however, endorse such recommendations.

Avoid travelling with filled water tanks unless they are close to centrally mounted. Or unless the travel trailer builder advises otherwise.

If feasible, re-house rear-mounted spare wheel/s under the chassis – ideally ahead of the axle/s. This is not an opinion. It is an issue of basic physics. Likewise, never locate a tool-box or cycle-rack at the rear of a travel trailer. If feasible have them in or on the tow vehicle.

Re-house batteries close to or over the axle/s.

Do not attempt to tow a travel trailer by an extended-chassis ute. Ideally, nor by a dual-cab ute. This is not least because of the known risk of imposed tow ball weight bending them. Many, such as that shown below, end up like this after attempting to use the Old Telegraph Track near the top of Cape York. 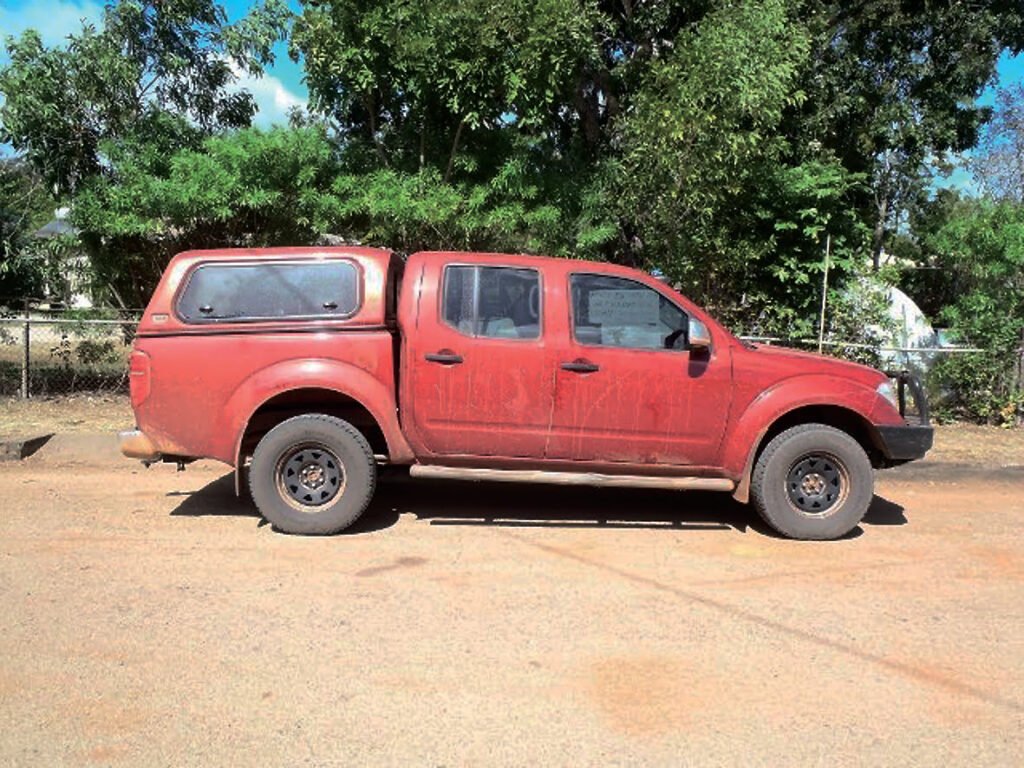 Consider adding ‘sway control’ devices only after everything possible has been done by following the weight distribution (loading) advice above. If you do so, reducing travel trailer sway is usually possible such that it is minor and self corrects after a couple of such sways. If this is done an anti-sway device will then usually all but eliminate sway.

The AL-KO tow ball housing has pressure loaded friction pads. It is simple and effective. But, as noted above, sway force energy increases at speed, yet pad friction remains constant, it is thus less effective at high speed. It is best limited to short, light travel trailers. There are also other friction devices. These are not necessarily better or worse. Some have clearly been designed to avoid infringing prior patents.

The AL-KO sway reducing friction tow hitch. Depressing the handle forces friction pads against the side of the tow ball. Pic: AL-KO Europe.

There are also sprung loaded cam mechanisms. These mechanisms ‘lock-up the tow ball’. Tow vehicle and travel trailer are thus literally held in a straight line. Normal cornering is enabled by tyre side-wall and footprint distortion. Tight radius cornering exerts forces that cause the cams to release. The device is thus ‘all or none’. Further, when emergency-swerves forces exceed the sprung cam’s ability to remain closed, pent-up energy is released when/where least needed. 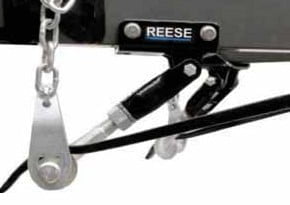 While hardly known to most non-USA caravanners, the Hensely hitch, in effect, cancels out the effect of travel trailer sway. It does so by a trapezoid hitch linkage that projects the pivot point of the trailer forward such that it is effectively close the tow vehicle’s rear axle. By not allowing the travel trailer to pivot side-to-side, trailer sway is virtually eliminated. The unit’s downside is its weight (of over 40 kg (about 100 lbs). This not an issue in the USA as many owners tow with what in Australia are mega-trucks.

The unit was designed and patented in the USA by Norman Gallatin but was used in a substantially modified form by Hensley. A lighter version is made. As far as is known there is currently no Hensely dealer in Australia.

Sway, with well-designed and correctly loaded travel trailers is normally controllable. An emergency swerve at speed, however, may result in forces that far exceed your rig’s ability to self-correct. If that happens above a critical speed (specific to each rig and its loading), recovery is virtually impossible. Moreover, the rig has literally become a chaotic system. Its ongoing actions cannot consequently be realistically determined.

Recent products sense sway level and brake the travel trailer’s wheels (only). These assists straightening the travel trailer (and tow vehicle). More importantly, they reduce the speed below that critical. There are two main approaches:

Tucson-Dexter’s operates at minor levels of sway. If exceeded, it brakes the travel trailer wheel/s opposite to the sway direction. While effectively eliminating minor sway, this unit masks inherent stability. That should be first addressed and corrected. The maker responsibly warns that the unit cannot overcome the laws of physics – but this is often ignored. 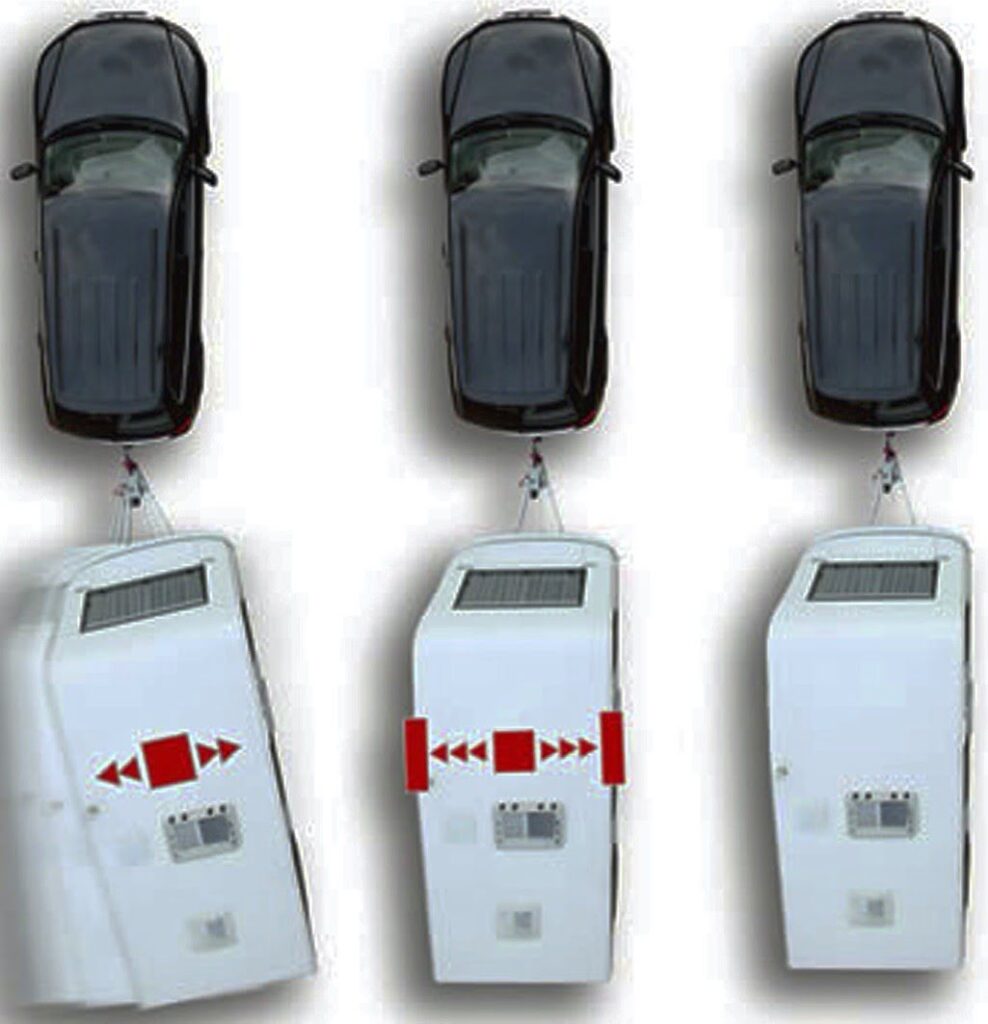 The AL-KO ESC system works like this Pic: AL-KO Europe.

These products are, however, being fitted to long, high and end-heavy travel trailers (often) towed by much lighter vehicles.

The forces associated with 5-7 tonnes of travel trailer and tow vehicle swaying at (say) 100 km/h are huge. These devices rely on the travel trailer tyres’ small rubber footprints to brake the forces. No such system is effective on dirt roads (where many roll-overs occur). RV Books consequently regards these units as last-resort ‘parachutes’ for use on hard-surfaced roads. Not substitutes for safe design.

Early goods carrying trailers towed via overhung hitches swayed badly. Many overturned. By 1920 (US) Fruehauf trailer maker realised how and why. Moving that hitch to directly over the tow vehicle axle solved the problem. The resultant fifth-wheel trailers rarely sway at all. This format is thus by far the most preferable for long heavy travel trailers.

If you found this article of value my books will prove even more so. To quote Caravan World magazine:  ‘Collyn Rivers has put his encyclopedic knowledge into print . . . there is virtually no issue he hasn’t covered.’

Collyn’s all-new Caravan & Motorhome Book covers travel trailer towing in depth. His other books are the Camper Trailer Book, Caravan & Motorhome Electrics, Solar That Really Works (for RVs) and Solar Success (for home and property systems). For information about the author: Click on Bio.

To assist others please consider posting a Link to this article on related forum queries.