Connecting caravan batteries – there’s no magic way of doing it!

Connecting caravan batteries is often misunderstood. This article explains what’s possible, and why and how to do it successfully.

A typical travel trailer has an ongoing need for energy. And an occasional need for (high) power. Knowing the difference between energy and power truly assists.

Energy is the ability to perform work. It was originally estimated that a brewery horse could typically lift 33,000 pounds one foot in one minute. That amount of energy was thus called one horsepower. This now mostly expressed in watts. (About 750 watts is one horsepower).

Power is the rate at which energy is used to perform work. If that 750 watts is drawn for one hour, it’s expressed as 750-watt hours.

That brewery horse’s one-minute lifting is equalled, in a few hours, by a child. Horse and child exert equal energy. But the horse needs far more power.

Battery usage is similar. A starter battery is thus horse-like. It can exert high power. Starting a car engine however, takes only two/three seconds. The energy expended is tiny. It’s about that used by a 12 watt LED in ten minutes.

A deep cycle battery, contrarily, is akin to a marathon runner. Less ‘power’ but energy can be expended far longer.

As explained above – most caravan batteries have two main (but different) requirements.

2. Enough energy to cope whilst away from 230 volts etc.

This can be addressed in two main (but different) ways.

Increasing battery capacity increases available power. And, virtually by definition, more energy. There are, however, downsides. You must, for example, have the ability to recharge them. That charging must be both deep and fast.

Lead-acid deep cycle batteries are heavy. Twelve-volt versions weigh about 25 kg/100 amp hour. Their life is greatly reduced by frequent deep discharging. Their plus side is (relatively) low price. Plus ready availability.

AGM batteries are a compromise. They are physically rugged – thus suited to off-road use. AGMs can supply higher power than conventional batteries. They maintain charge far longer (12 months plus in cool climates). AGM batteries, however, are even heavier than conventional batteries. Discharge needs limiting to about 50%. If exceeded, their life is thereby curtailed. And they cost a lot more. (Gel cell batteries are similar – but less often used.)

Any 12-volt LiFePO4 battery above 18 amp-hour supplies RVs peak power with ease. The energy capacity needed, however. is slightly less. This is because they can be routinely discharged to 10%-20% remaining. Another benefit is that (in RV use) they rarely drop below about 12.9 volts. They are about 35% of the weight and bulk. On the downside, they cost far more. They must also have effective individual cell management. Buy only from vendors who truly understand them. These are, however, rare.

In practice, a 300 plus amp hour AGM battery will provide the peak power required for any RV. It also has ample energy capacity. AGM batteries are thus a good choice if space and weight permits

To ease handling, (or obtain higher voltage, or higher current) batteries can be connected together. There are two main ways of doing so.

Parallel: positive to positive, and negative to negative. This battery bank (at the author’s previous all-solar powered property outside Broome, WA) had 16 batteries, each of 12 volts and 235 amp-hour. Each level has four such batteries in series. All four rows are parallel connected.The output is thus 48 volts and 950 amp-hour. That’s 45,120-watt hours (45.12 kW/h).  Pic: rvbooks.com.au

Contrary to common belief, this is safe. Like good socialists, each (battery) will thus take according to its need, and supply according to its capacity. See Interconnecting batteries in series or parallel re advised limits.

To increase both voltage and current, you parallel identical strings of series-connected batteries. Here, the voltage is that of any one string. The amp-hour capacity is the sum of all the batteries’ capacity. Doing so, furthermore, is routine in large solar systems. They are typically 48 volts upwards.
Connecting batteries in series (end-to-end) thus increases the total voltage. Connecting batteries in parallel increases the total current.

In every case, their total energy (i.e. watt-hours) is the sum of each battery’s energy so connected.

There is no magic way of increasing it.

Most travel trailers and motorhomes have 12 volt systems. As batteries are heavy, some owners prefer 6-volt batteries. To obtain 12 volts they are series-connected (positive to negative) as below. This results in the same current (as each 6-volt battery) but twice the voltage.

If more capacity is required, further pairs of so-connected batteries are then wired in parallel as shown below. 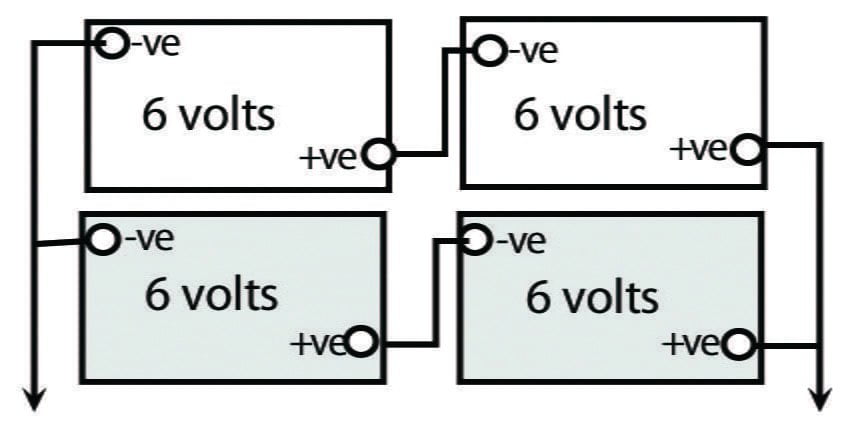 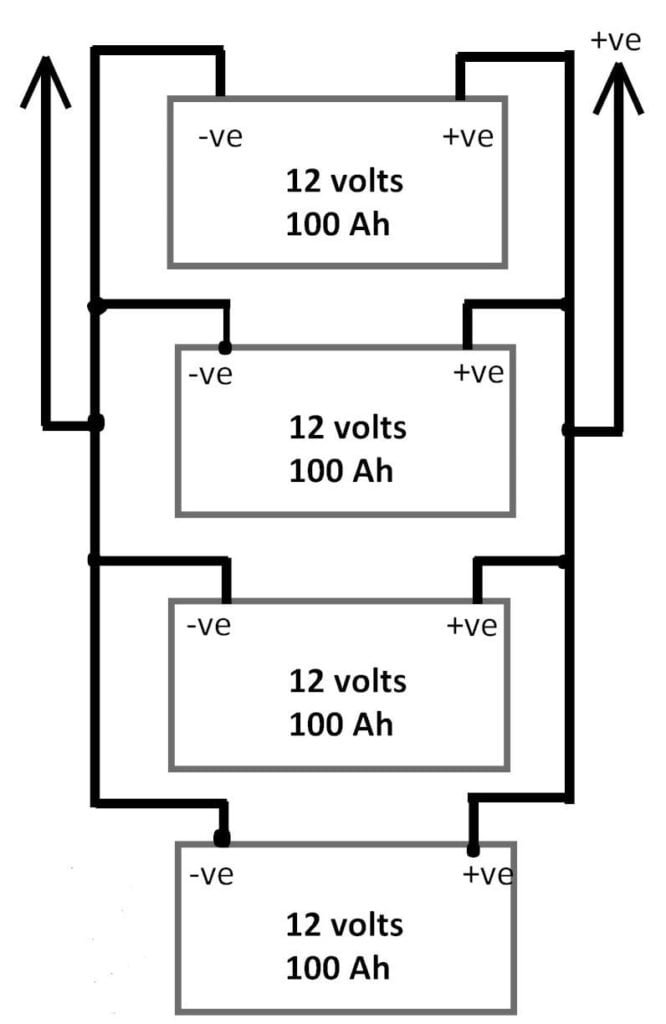 For most RVs, the highest (domestic) power need is likely to be a microwave oven. They draw about 130 amps for 5-15 minutes, typically via an inverter.

Any LiFePO4 battery used as the main RV supply will cope with ease. Such power can just be met by a 12 volt 200 amp-hour AGM battery. But 300 plus amp hour is preferable. Some owners attempt this with 200 or so amp hour deep cycle lead-acid batteries. They will supply such power for a short time, but doing so repeatedly shortens their life.

The best way to increase available power for the same energy capacity is via batteries capable of doing so.

The highest energy and power (by far) is from lithium-ion (LiFePO4). Any such battery will have ample to drive whatever you wish. They also have more available energy capacity. They are however costly. Furthermore, they need specialised installation and charging.

If you liked this article you will like my books. They are technically accurate – yet in plain English. Other books are the Caravan & Motorhome Book, the Camper Trailer Book, Solar That Really Works (for RVs), and Solar Success (for homes and properties).