Interconnecting batteries in series or parallel- here’s how and why

Interconnecting batteries in series or parallel is totally feasible. But its best to know how it works. And the limitations of each. Collyn Rivers explains.

The most common need for parallel connection is to limit individual battery weight. This mostly in systems above 120 amp-hour. A 12-volt deep-cycle 120 amp-hour battery weighs about 32 kg. To ease handling it’s common to parallel multiple such batteries.

Interconnecting batteries in series or parallel – the pros and cons

Each way of interconnecting has pros and cons. Not, however, the same pros and cons. Nevertheless, if you need over twelve volts, and/or substantial capacity, there’s little choice. You must increase voltage, current or both.

One argument against series connection is that usage is limited by the ‘weakest’ cell. It overlooks, however, that most batteries over two volts have series-connected cells. Such cells must thus be of identical type, capacity and condition. This is particularly so with lithium batteries. Their cells must retain equal voltage.

Do not tap 12 volts from one of two 12-volt series-connected batteries. The battery that is less drawn on becomes fully-charged sooner. This inhibits the other battery from fully charging. The only remedy is to disconnect them. You must then charge each separately.

You can, however, obtain 12 volts from a series-connected pair. Moreover, you can do so in either of two ways. You can do it via a so-called equalising unit. These are made in Australia by Redarc, and GSL Electrics.

Or you can do it via a 24-volt to 12-volts dc-dc converter. This latter system is commonly used in boats. For those, 24-volts is often used for winches, but 12-volts for most else. See 12-volts-dc-from-24-volts-dc/

Paralleled batteries (or paralleled strings of series-connected batteries) must all be the same voltage. They may, however, be of varying capacity. 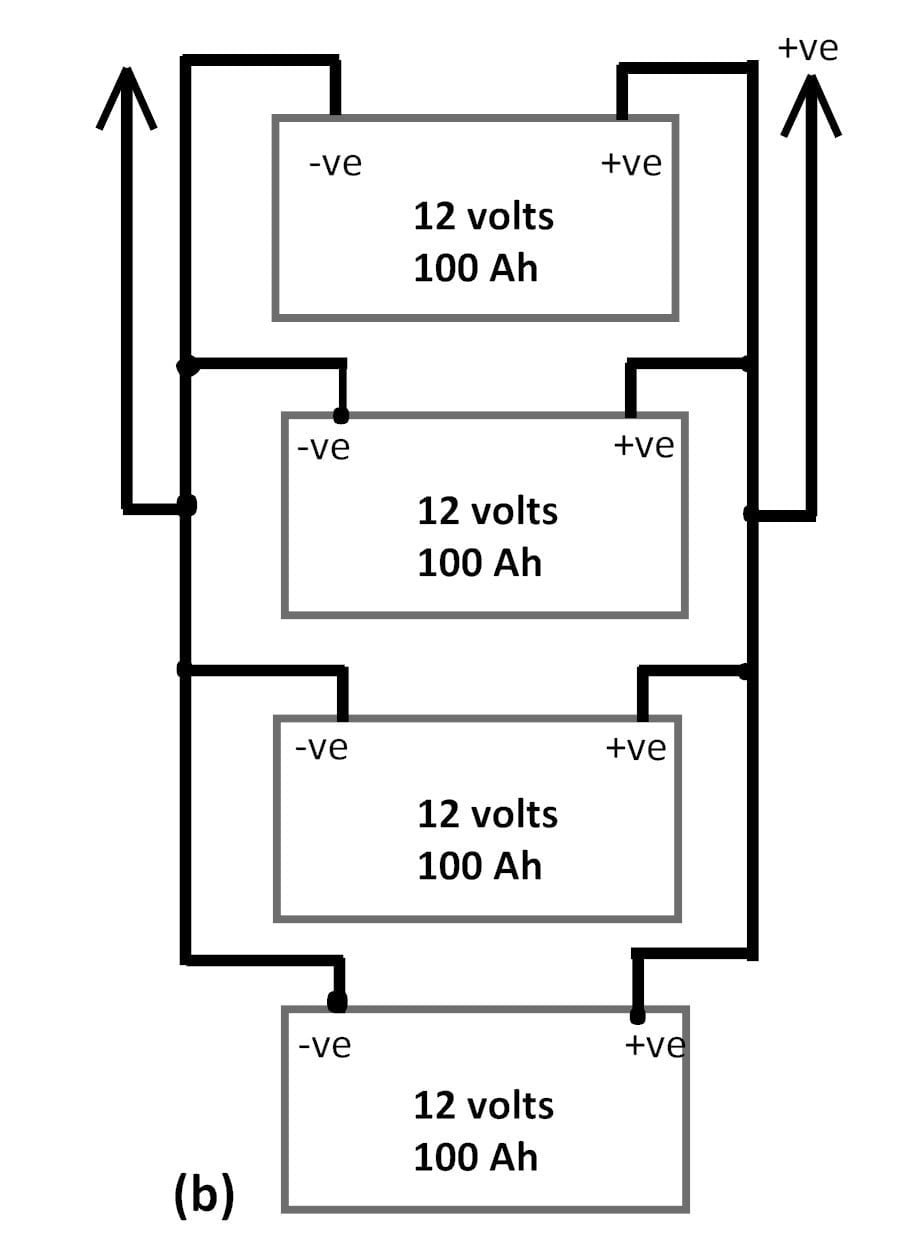 Battery makers are rarely opposed to parallel connection. Most, however, specify how to do it. General Electric says ‘there are no major problems with parallel charging.’ Exide, however, is more cautious. It advises ‘up to ten batteries may be interconnected without problem as long as certain precautions are followed’.

There is ‘golden way’ of interconnecting batteries to increase energy. Any combination of the same batteries always provides you with the same amount.

There is no problem parallel charging batteries of the same type and voltage but different capacities. They look after themselves. ‘Each draws a proportionate share of the available charge. All reach about the same level of charge at roughly the same time,’ (says Ample Power Company). They discharge much the same way. That shown above is a bank of 16 batteries (each of 12-volt). They are connected in series/parallel to provide 48 volts at approximately 960 amp-hours. Pic: author’s previous all solar house north of Broome.

Interconnecting batteries in series or parallel – what happens when a battery fails?

Traditional starter batteries usually fail instantly. Over time, active material shed from their plates piles up in the bottom of each cell. Furthermore, that loss is rapid if the battery is regularly over-discharged. Moreover, if/when shed material rises high enough to short-circuit the plates, the battery fails instantly.

If a deep cycle battery is long uncharged, dendrite (a tree–like structure) forms during recharge. This causes a virtual ‘short circuit’ across the cell. Furthermore, this too kills a battery – instantly.

Such failure is a common forum argument against paralleling batteries. ‘Just imagine,‘ some say, ‘what happens if a fully charged cell in a big battery shorts itself out.’

What really happens in (say) a 100 amp-hour battery is that current will flow in that cell at a probable 100 amps. While not a huge amount of energy that current may nevertheless cause the electrolyte to boil. As that happens current flow slows. It eventually stops. Meanwhile, adjacent cells heat up. As their electrolyte boils away, they too stop conducting.

The argument may then extend to ‘what happens with possibly fully-charged batteries paralleled across one with a short-circuited cell’. This, however, is like applying 12.5 volts across a (now five-cell) 10-volt battery. And charging a 12-volt battery at 15 volts. The warm dead battery becomes a slightly warmer dead battery.

The main risk is of hydrogen being created. But, providing the battery compartment is ventilated, that risk is unlikely. ‘Since the early 1960s . . . we have witnessed no dangerous situation that resulted from a cell short,’ says the USA’s Ample Power Company.

Many big property stand-alone solar systems run at 48 volts. They usually do this by parallel-connecting strings of four series-connected 12-volt batteries.

The above applies to all batteries: conventional lead acid, gel cell, AGM and Lithium.

If you liked this article you will like my books. Batteries and their charging are fully covered Caravan & Motorhome Electrics. That for solar in cabins and RVs is in Solar That Really Works. That home and property systems are in Solar Success. My other books are the Camper Trailer Book, and Caravan & Motorhome Book. For information about the author Click on Bio.