Lightning risk in RVs – how to reduce that risk

Lightning frightens, but lightning risk in RVs is very low. That risk however is far from random. Here’s how to reduce it yet further.

About 80% of those struck were using a land-line telephone. This risk is falling fast as people switch to risk-free mobiles. Golfers however are particularly at risk, especially if swinging a club. Also at risk is anyone using an umbrella during a storm, or walking on a beach. It’s not that hard to reduce the odds!

Some areas of Australia are especially prone to severe thunderstorms. These include the Blue Mountains, the Dandenong Ranges, the Kimberley, and the north of Australia (generally during the monsoon season). The lightning risk in RVs in these areas is very much higher than in most other areas. It is primarily for those living or travelling in such areas that this article is intended. 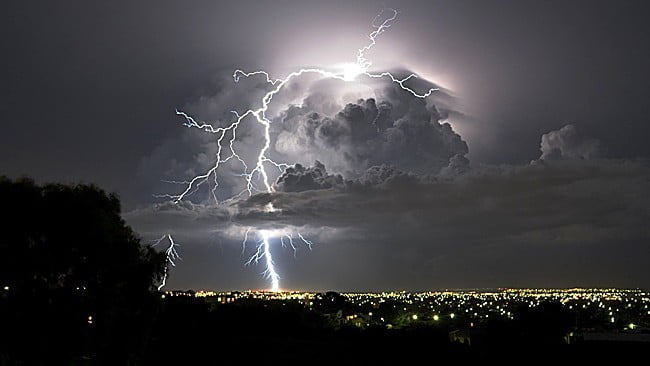 At all times, the earth’s surface carries a typically negative charge. The upper atmosphere carries a positive charge. As a storm develops, the voltage difference builds up to many hundreds of millions of volts. Once the voltage between ground and upper atmosphere exceeds a certain level, the air ionises (i.e. electrons become freer to move). This eases the passage of a lightning strike much as straightening or surfacing a road initially eases traffic flow.

So-called ‘step leaders’ reach down toward earth and (like early pioneers, the one that gets there first tends to set the route for that which follows). On earth, objects respond by sending out positive voltage streamers. When such a streamer meets a step leader, a conductive link is formed. The resultant current flow generates so much heat that the surrounding air literally explodes – resulting in thunder claps.

Lightning risk in RVs – seek shelter if outside

The most dangerous place to be in a thunderstorm is out in the open but there is usually a fair amount of notice. A good rule is to seek shelter once a thunderstorm is within 10 kilometres. That’s about 30 seconds between seeing the lightning flash and hearing the thunderclap. Stay sheltered for at least 30 minutes after the last lightning is seen.

If you are caught out, avoid becoming a positive voltage streamer – such as a golfer in mid-swing. Do not use an umbrella. You are actually safer if soaking wet as any current is more likely to pass through the wet clothing.

If the risk seems very high, crouch down with feet together and with your head held low. Never shelter under a tree. If you have to stand, keep your feet as close together as possible. This is because a nearby strike causes voltage differences of thousands of volts per metre in the nearby ground. Having a few hundred volts difference between one foot and the other leaves you very dead. Absolutely do not lie down.

Almost any form of building is safer than being outside but keep away from walls, metal plumbing etc. Do not use the loo (water is conductive). The lightning risk in metal-bodied travel trailers, motorhomes and coaches is exceptionally low. A metal structure (even of metallic mesh) provides a so-called ‘Faraday cage’ within which all current flows through the external metal to earth. Within such an RV you may not even be aware of a strike.

If the storm is at least 10 km away, lower the TV antenna (disconnect it at least). Physically disconnect all external power leads. Do not, however, do either if a storm is closer.

‘Cone of protection’ is a myth

Ignore all campfire and forum Internet mythology about the ‘cone of protection’ provided by tall trees and buildings. These attract lightning strikes. Such strikes cause a voltage gradient that spreads out on the ground beneath and near the sides of a tree or building. This can kill at up to 30 metres or more from that strike’s centre. Essentially nowhere outside a building or vehicle is safe whilst lightning is around.

Whilst a vehicle’s tyres might appear to insulate the vehicle from earth, all rubber tyres now contain carbon. They are deliberately semi-conductive to limit static charge build-up. At lightning’s voltages, tyres become good conductors. In storm conditions, however, do not exit an RV holding the door handle whilst touching the ground. It’s best not to go outside anyway.

All large external metal structures attached to a travel trailer or motorhome (e.g. air conditioners) should be bonded to the chassis using at least 6 AWG cable.

These work by dissipating ‘electrical charge’ built up where the voltage difference does not become high enough to attract a ‘step leader’. They work best if they have a point at the top. That point concentrates and assists charge dissipation. A lightning rod is well worth having in lightning-prone areas – such as the Kimberley.

Lightning risk in RVs that have fibreglass or composite bodied vehicles is reduced by having a conventional lightning conductor with a (sharp) spike. This should be well above the roof and earthed to the vehicle chassis via starter motor cable that runs externally. If you do this never use soldered joints as the massive current flow will melt them instantly. Instead have an auto-electrician crimp them for you.

Lightning seeks the straightest path. To reduce lightning risk in RVs keep any such earthing cable as straight as possible and routed well away from where people may be.

For those seriously interested in lightning risk in RVs, the Standards reference is AS/NZS 1768:2007.

The topic of electrics and travel trailers generally is covered in depth in my book Caravan & Motorhome Electrics. That of solar for cabins, camper trailers, travel trailers and motorhomes is in Solar That Really Works!. That for larger home and property systems is in Solar Success. My other books are the Caravan & Motorhome Book, and the Camper Trailer Book. For information about the author please Click on Bio.