Twelve-volt RV systems require two electrically conductive paths between the battery and whatever light or appliance they energise. This can be done in two different ways. The first is to use a separate lead for each. The second way, twin-wire or chassis return is to use the RV’s metal chassis as part of one of the leads. This is primarily to save cost. Copper is very expensive – the chassis is already there.

This article strongly recommends using the twin-wire connection. This is particularly so for campervans and motorhomes. Furthermore, this article explains why. Moreover, it shows how to avoid known problems.

The chassis as a conductor

So-called chassis negative return uses the RV’s metal chassis as the common negative conductor. A single light wire from each appliance connects to the chassis. A heavy cable then connects the chassis to the battery’s negative terminal. A single positive wire only is thus needed most appliances. This saves the RV maker a few dollars.

Chassis negative return works well initially if the chassis connections are correctly made. Many are, however, exposed to damp. They then corrode. After a year or two connection may become intermittent. Or fail totally. 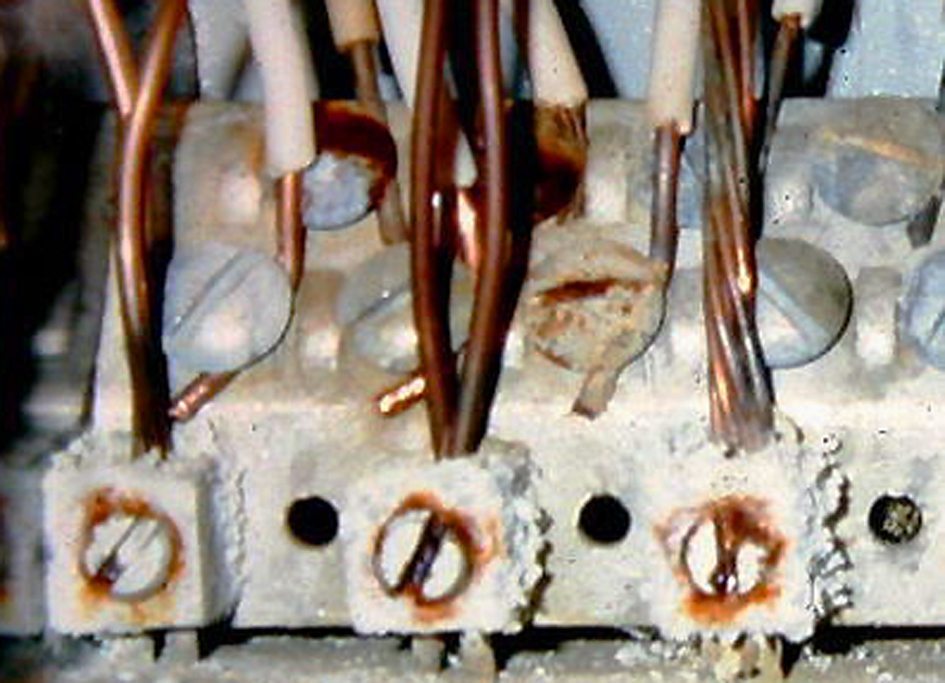 After a time negative return connections may look like this! Pic: inspectapedia.com

Faulty connections cause many RV problems. Auto-electricians dislike them as faults may be intermittent. Not all RV makers use chassis return. Those that do, however, make such connections thoroughly. Moreover, they protect them against dirt and damp.

Chassis return RV electrical wiring is rarely an issue. It is usually done thoroughly with the chassis terminals welded to the chassis. Most problems arise with owner-added connections – usually via self-tapping screws – that rust over time.

The major issues with chassis return particularly affect powered vehicles. It can cause so-called ‘electrolysis’. This is a particularly invidious form of corrosion.

Chassis return’s intention is for all negative current to flow only via that chassis and the heavy cable to battery negative. Electric current, however, attempts to flow via every metallic path. It does this mostly via the chassis. Problems occur, however, if that main earthing cable loosens. Or its connection corrodes, also if inadequately sized. Return current then seek paths of lesser resistance. This is often via the radiator and water pump. Both contain different types of metal. These are mainly attacked. As current flows through them they corrode. Single-core (usually black) is used for chassis earthing. Red is used for positive. A few companies, however, use black (+ve) and white (-ve). The twin-core cable shown here is used for circuits that do not use chassis return.

This issue is often caused following vehicle front end repairs. A spot-light (or worse a winch) may have originally had its negative lead strapped to the chassis. The repairer, however, may re-connect to the closest nearby metal. That can result in part of the current flowing via the radiator. Or the water pump. If that happens, corrosion is virtually inevitable.

Vehicle makers require routine service checks for electrolysis. It is done by measuring the voltage (to earth) of the radiator fluid. It should zero. For a fuller explanation ‘Electrolysis Corrosion in Vehicles’.

Caravan & Motorhome Electrics covers every aspect of designing, specifying and installing RV electrical wiring. It also covers every type of lighting and appliances, plus solar and charging systems.

Solar that Really Works does likewise re solar for cabins and RVs. Solar Success is for homes and properties. Caravan & Motorhome Book covers every aspect of RV use. For author information: Click on Bio.