When choosing a travel trailer tow vehicle there are key towing specifications that you need to know. This article explains what they are and why they are vital.

It is important that your travel trailer or trailer does not exceed these specifications. These are:

Vehicle makers stipulate two towing capacities: for trailers that are braked and unbraked. Brakes are required on all trailer of a laden weight over 750 kg. If travelling off-road, however, it is advisable to have trailer braking, that ideally, is appliable by the driver. This can assist the trailer from sliding sideways on a cambered and slippery track.

Apart from braking, a vehicle’s maximum towing capacity is in effect what it can pull on the end of a rope. It relates to matters such as its ability to stop and restart on a specified gradient etc. This ensures it has adequate power and torque. That overlooked by many caravanners is the tow vehicle market is military and trades-people. Their typical trailer is short and rarely over 4 metres (about 9 feet).

Tow-ball Mass – to be stable at all speeds a trailer must be nose heavy. The percentage of trailer weight required relates to trailer length (not just weight). Most 4-metre trailers need only 5-6%. Many travel trailers, however, are longer. They really do need that long-recommended 10%.

There is substantial evidence that the speed at which swaying becomes probable is related to tow ball mass. Other factors are involved, but the lower that (percentage) mass, the lower that safe speed. That many long and heavy travel trailers now have a maker-recommended tow ball of as low as 4% is of (in RV Books opinion) of concern.

Vehicle makers stipulate the maximum down-force that may be placed on the rear of the vehicle. This is a trap for new buyers. The required down-force of a three-tonne travel trailer (300 kg [660 lb]) may exceed the limit of the tow vehicle.

NOT a recommended tow vehicle for this travel trailer. Pic: From ‘Free to Roam’ by John Sworder

In 2015 many local travel trailer makers launched twin-axle two-tonne plus products. From that year on, travel trailer jackknifing and rollovers escalated. In one week alone (in mid-2018) there were three travel trailer rollovers on Queensland’s Bruce Highway. A few days later one rolled over on the Reid Highway (WA). Another on QLd’s Stuart Highway. Now, (late 2020) the numbers remain much the same. Many are of dual-cab utes towing twin-axle travel trailers that are heavier. It is not uncommon to see a laden dual-cab ute (a typical 2700 kg [5950 lb]) towing a long 3500 kg (7715 lb) travel trailer.

As noted above, a vehicle’s maximum towing capacity in effect relates to the load it can pull at the end of a cable. It also relates to its ability to restart on a steep hill.

When specifying towing capacity, the vehicle maker does not take into account the effects of trailer length, side forces, load distribution or overhung hitches. Nor tyre types and pressures or suspension, chassis, tow bar and hitch construction. This is because by far the major towing usage is the military and trades-people. Both typically tow twin-axle trailers that are under four metres – and are rated at about two tonnes. Only a tiny percentage of them tow travel trailers.

It has long been strongly recommended that a laden trailer’s weight be below the maximum towing capacity of the tow vehicle. Both RV Books and the user-oriented Caravan Council of Australia, recommend the laden travel trailer ideally be no more than 80% of the tow vehicle’s laden weight. Most travel trailers, in Australia, however, are far heavier than the laden tow vehicle. While that continues, jack-knifing related accidents will likewise continue.

There are, however, often misunderstood, or not realised issues that will considerably reduce towing risks.

When choosing a tow vehicle, the wheelbase (distance between the tow vehicle’s front axle to rear axle) the longer that distance the better. Of equal importance is its rear overhang (distance from the rear axle to the tow ball). The shorter the better.

Most of the more popular Australian tow vehicles have a wheelbase under 2.9 metres. Their rear overhang is (typically) 1.24 metre. This is a ratio of 2.234.

Some dual-cab utes have almost absurdly long hitch overhangs. One, measured recently was over 2.3 metres. That, if used for towing anything much over 4 metres (about 13 feet) would be an accident looking for somewhere to happen.

Some years ago, an otherwise excellent tow hitch sold in Australia had ‘ease of coupling’ prejudiced by an excess overhang. That was subsequently remedied. A few hitches on the market are longer than they need to be (to seemingly aid coupling and uncoupling). The rig’s stability is far more important.

Where the hitch’s holes placing precludes minimal overhang, have a machine shop drill a new hole. An excess centimetre or two is acceptable, but anything over is not. 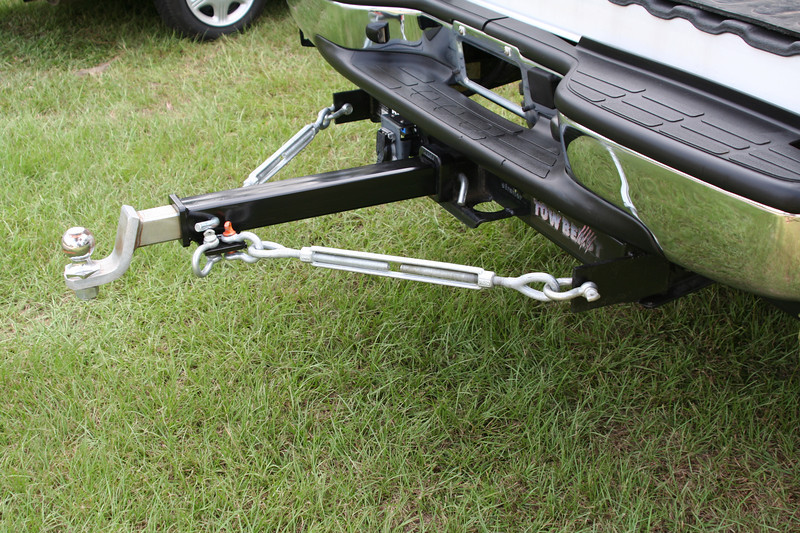 In recent years, it is not only travel trailer average weight that has increased. Many are far longer. Excess length is even more serious an issue than excess weight. This is due to what engineers call ‘Moments Along a Pivoted Beam’. This, in essence, is that the further any mass is away from the pivot (e.g. a travel trailer axle) the greater the effect of that weight. This is readily seen in playgrounds. A light child on the far end of a see-saw is balanced by a heavy person close to its middle.

The effects of Moments Along a Pivoted Beam. Pic: source unknown.

This is rarely an issue with single-axle travel trailers,  but it can be with those longer and twin-axled. These impose strong side forces on the rear tyres of the tow vehicle. That vehicle needs to be heavier enough and long enough to withstand those forces. Those tyres need pressure increased by 50-70 kPa (7-10 psi).

None of the above length issues has associated legislation. That which has, however, is the so-called Gross Combined Mass (GCM). This is the maximum legally permissible laden mass of the tow vehicle and trailer combined. It is typically 5500-6500 kg. GCM relates to all tow vehicles and trailers.

The GCM does not necessarily relate to safety. A GCM that relates to a tradie towing a short trailer full of concrete blocks via a dual-cab ute is very different from that same vehicle towing a seven-metre plus travel trailer.