Ultra-light travel trailers – they are rare but feasible. Here’s how to do it

Ultra-light travel trailers and fifth-wheelers are rare but feasible. Here’s how it is done using hi-tech materials. One, over 9 metres, was under 2000 kg (4400 lb).

Australia’s Glenn Portch spent 20 years experimenting and building ten ultra-light fifth-wheel travel trailers. His own 11.3-metre unit weighs 3200 kg (7050 lb). Its payload (of an extraordinary 1200 kg [2650 lb]) allows him to include his Harley Davidson motorcycle with ease. The last of the eight he made is 9.1 metres. It was originally under 2000 kg (4400 lb) but the buyer insisted on a granite kitchen benchtop!

Glenn’s first engineering was in the 1980s. He sought a pair of up-market loudspeakers. Most, however, were costly, available only in black, and lacked styling. He researched extensively. Then, using the very best available components, designed and built them himself. They had gloss white enclosures with black granite overlays. A Sydney hi-fi shop owner (that I also know) asked if Glenn to build more.

Glenn and his (then) partner set out to build the world’s best. Within a few years, they exported their (Audio Definition) loudspeakers to nine countries. They had 14 local dealers. The products were not cheap. Their sound quality necessitated top-quality components. The superb cabinet finish demanded years of research and testing. They made lower-priced models too, but the top ones were $35,000 a pair. They were so successful they won many top world awards.

Glenn later became interested in travelling around Australia. Often in the USA – researching audio, he could see that fifth-wheeler travel trailers were rapidly gaining acceptance. The fifth-wheeler configuration (and its inherent towing stability) appealed to his knowledge of the physics involved. But whilst liking the concept, those available seemed unnecessarily heavy. Some absurdly so. So, once again Glenn decided to build his own. But ultra-lightly!

Despite aluminium-framed aircraft since 1900, many travel trailer builders assume weight confers strength. Many a locally-made travel trailer‘s floor and fit-out are of heavy plywood. This adds little structural strength, yet considerable and unnecessary weight. It is seriously counterproductive. Such weight necessitates a heavier chassis, suspension and tyres to carry it. As a result, most US and Australian-built travel trailers are heavy, yet not necessarily strong.

A few local makers use lightweight body construction. Most, however, retain a heavy (yet not strong) chassis. They are still lighter -yet still unnecessarily overweight.

Before designing and building himself, Glenn approached many travel trailer builders. All claimed it could not be done. ‘Aluminium tends to break mate’. But, as Glenn points out, steel used incorrectly may also break. He suggests anyone truly believing aluminium used correctly breaks, to ‘bear in mind that Boeing’s aircraft are hardly based on rolled steel joists’.

Some trailers have alloy chassis – but of ‘C’ section, or I beams 6-10 mm thick. Their resultant weight and poor torsional rigidity, however, defeats the point of using alloy. But promotionally it’s good.

Glenn Portch’s concept employs ultra-light three-dimensional trellis-like chassis of light box-section aluminium. A composite material floor, and a similar (frameless) body bonds to that chassis. This allows slight flexing to cope with road irregularity stresses. His ultra-light travel trailers are thus similar to aircraft and ultra-yacht design. It enabled his aim, of about 200 kg/metre for fully equipped units, to be achieved.

For anyone doubting the strength and durability of Glenn’s ultra-light travel trailers approach, consider this. The first (of eight) built had (in 2018) already exceeded 300,000 km. That’s 23 times more than the average travel trailer‘s 13,000 or so km a year.

The cabinetry’s cube-lock square aluminium extrusion is held together by plastic corner locks. These are riveted and glued to the main structure. This, working in unison with the monocoque shell, further adds strength. Glenn makes the drawers out of 1.6 mm aluminium. Runners rivet them in place within the cube-lock structures.

Benchtops are 30 mm Monopan, laminated, and with Jarrah timber edging. The Monopan is finished inside and out with automotive two-pack paint. ‘It withstands weathering better than bare fibre,’ says Glenn. 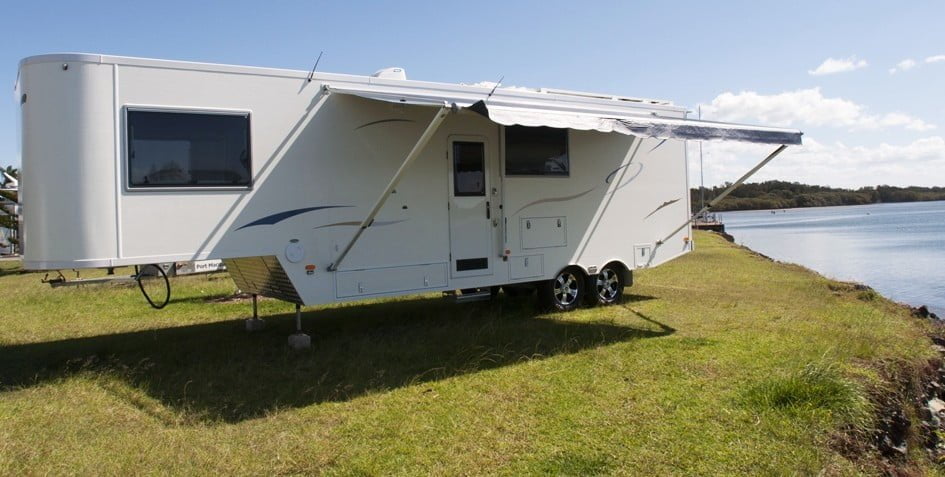 This one is sumptuously fitted out. It has 380 amp-hour battery capacity, plus 450 watts of solar. The 1500 watt Trace inverter has an inbuilt 75-amp charger. There is a 219-litre compressor fridge, 400 litres of freshwater, 300 litres of greywater, plus 220-litre black water tanks.

Without its AL-KO suspension, the chassis weighs a mere 200 kg (440 lb)! Had a traditional 19 mm plywood floor been used, that alone would add some 200 kg (440 lb). Yet have zero structural strength. Traditional construction also necessitates a heavier chassis, wheels, tyres and brakes to carry it. All add yet pointless weight. 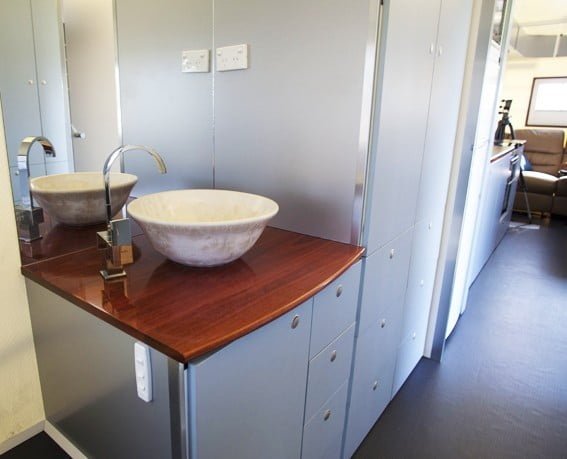 The completed unit originally weighed under 2000 kg (4400 lb)! The buyer, however, sought heavy additions, including dining, vanity and bedside tables of solid Jarrah. Also sought was a full-size double domestic sink and 6 kg (13 lb) capacity washing machine. Plus a china toilet and macerator. There is also a hospital-grade vinyl floor that weighs as much as the 30 mm Monopan it covers!. Required too was a slide-out BBQ, beneath a 5.4-metre awning. 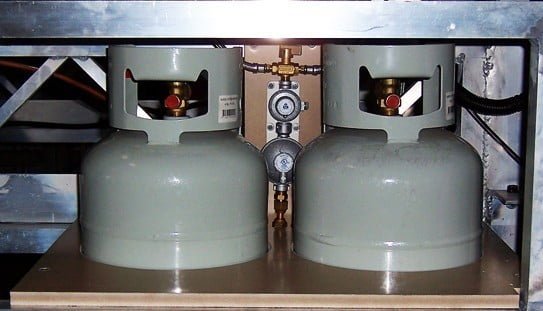 Glenn is constantly asked to build ultra-light travel trailers for general sale. His main aim, however, was to show (and prove) what he felt possible. He did not do this for profit, but out of intellectual interest. Developing and proving the concept took over 20 years. That he has now done. He considered consulting if any manufacturer was interested. But, a now five years later, none appear to be.

Now, Glenn enjoys using his own fifth-wheeler. He spends much the Australian winter up in the tableland outside Cairns.

I thank Glenn Portch for so generously sharing his knowledge. This article (originally published in 2017) has already inspired many self-builders.

For further information on fifth wheelers see https://rvbooks.com.au/fifth-wheel-caravans-are-safer/ Also https://rvbooks.com.au/caravan-and-tow-vehicle-dynamics. The topic is covered also in the Caravan & Motorhome Book. My other books are: the Camper Trailer Book, Caravan & Motorhome Electrics, Solar That Really Works (for RVs) and Solar Success (for homes and properties). For author information click on Bio.