Most fridges are essentially pumps. They move heat from where it is not wanted to where it does not matter. All work like this. They differ in how they do it – and also how well they do it. They also differ in their ability to cool in hot weather. The major differences in how well they work are largely due to how well they are installed. This article covers RV fridge basics. 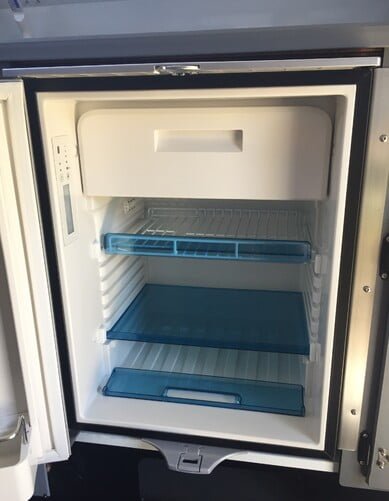 These (in RVs) are powered by the alternator whilst driving and the RV’s auxiliary battery for roadside stops. They are intended to run on grid power or LP gas at all other times. When running on LP gas an 8.5 litres cylinder typically lasts three weeks. It is not feasible to run them only from solar or battery power.

RV fridge basics are such that to cool satisfactorily, three-way fridges must be installed correctly. Far from all are, resulting in poor performance. As a result, they have an undeservedly poor reputation amongst RV owners.

Three-way fridges cool via a liquid that has a very low boiling point. This liquid is heated until it vaporises (boils). The vapour then flows into an evaporator inside the fridge, absorbing unwanted heat. That heat is then dissipated externally.

These are now by far the most commonly used in RVs. They work by compressing a gaseous refrigerant into a smaller and liquid volume. This forces the gas’s molecules closer together – thereby heating them. If then allowed to expand, the (heat) energy its molecules contain is now within a larger volume of space, so the gas becomes cooler and absorbs heat from the refrigerator’s contents. That heat is then released, via external cooling fins, to where it does not matter.

From thereon the Second Law of Thermodynamics ensures that things of different temperatures tend to equalise in temperature. This includes RV fridge basics dictate.

Most intended for mobile use 12/24 volt motor-driven compressors but almost all run optionally on 230 volts AC. They are thermally and electrically efficient – particularly the top of the range units made from 2018 onward (that have variable-speed compressors). These fridges run well from solar.

Until 2014 or so, most compressor fridges ran constantly until they reached their preset temperature. A thermostat then cut the power. The power was restored when the internal temperature rose a degree or two above the set level. In ambient temperatures of 25 degrees C or so they typically ran in a 40:60 on/off ratio. This ratio varied as the contents cooled, but could be continuous in very hot areas.

At 27.5 degrees C ambient, and set to 4 degrees C, most efficient compressor fridges of 40-80 litre draw about 0.7 Ah/day per litre. This progressively falls – to about 0.5 Ah/litre/day for fridges over 150 litres or so.

Compressor fridges that have variable speed motors (they run constantly, adjusting speed as needed) use about 25% less energy.

Fridge-freezers, with the freezer at -14 degrees C to -18 degrees C, draw only marginally more once their content is frozen. This is because their insulation is thicker.

As with fridges generally, RV fridge basics dictate they increase their draw by about 5% per every 10 degrees C higher in ambient temperature and by the same amount if set colder. Energy usage varies slightly from brand to brand – with the variable speed units generally more efficient). Installation, ambient and set temperatures and usage all affect consumption. If freezing is not required, energy is saved by using a chest freezer (providing it can be set to +4 degrees C). Not all can.

Many RV users prefer an electric fridge if travelling extensively and spending only a day or two at powered sites. Given space for solar modules, an energy-efficient 12-volt fridge can be used successfully for extended periods away from grid power. However, a fuel cell or a generator is advisable for energy back-up during periods of little sun. Or hook up your RV to the tow vehicle and go for a long drive.

Top-opening refrigerators are marginally more efficient than door-opening units. This is because cold air is retained when opened. That lost from door opening units can be minimised by using plastic drawers to block that cold airflow.

One minor drawback of top opening fridges is that water vapour condenses in the bottom of the chest and needs removing every week or so. A curiosity of RV fridge basics is that most needed items migrate to the least accessible area.

Many RV owners would like to have a second fridge inside their tow vehicle. This is handy when shopping (although an Esky filled with ice works just as well for short distances). Consider having 40-60 litre compressor fridge in the tow vehicle. You can power that fridge by about 200 watts or so of solar on the tow vehicle’s roof, charging a 100 amp hour AGM or lithium). This enables you to run the fridge constantly from solar alone. This is not feasible if your roof carries a boat up there – but that is never a good idea anyway. 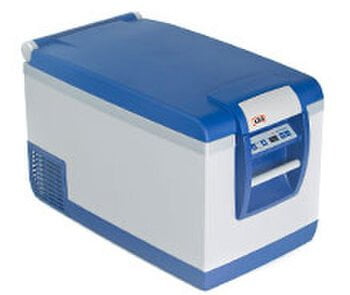 There are no local performance standards for RV fridges. European-designed three-way fridges, however, must meet EU Standards that include ‘Climate Classes.’ These define the ambient temperature at which the fridge must deliver its claimed performance.

Regardless of brand, Climate Class ‘T’ fridges can only be positively identified by the letter T following the ‘Climate Class’ box on their compliance/rating plate

RV Books believes that only the ST (but preferably the more costly T) units are the only three-way fridges suitable for travelling in the hotter parts of Australia and the northern island of New Zealand.

An RV fridge of 80-100 litres is likely to be ample for most RV users. Freeze-dried food is equally edible, and storable at ambient temperature.

Do not overfill RV fridges (and make sure nothing can break in transit). Avoid putting in hot items. Set the internal temperature no colder than the recommended +4º C (fridge) and -14º C to -18º C (freezer).

Reduce fridge power consumption by cooling them in your home fridge before a trip. If your RV has a fridge-freezer, conserve energy by overnight de-thawing any food needed the following day.