Upgrading solar system has unexpected traps. It is often better to scrap, use elsewhere, or attempt to sell that existing, and install a new one. This is particularly so with grid-connect systems and doing so with stand-alone systems is still tricky. 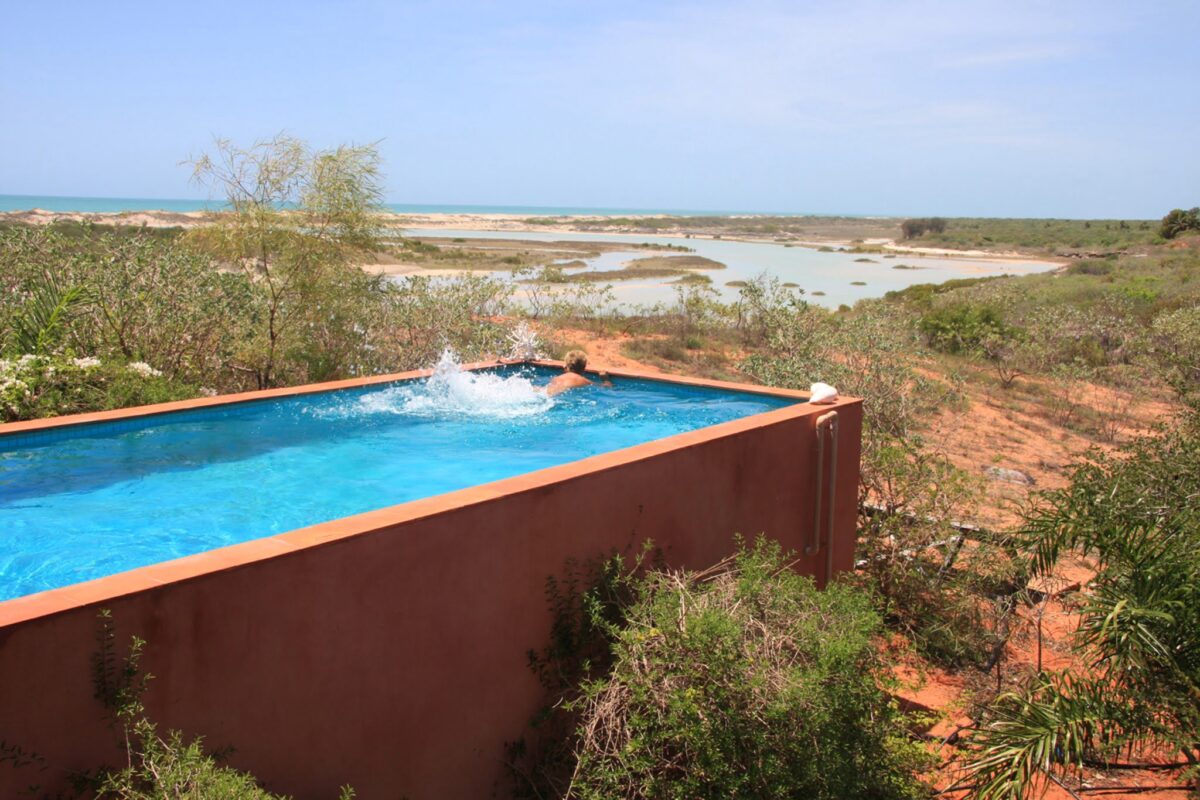 The Broome pool. The four 120 watt solar array can just be seen low down at the far (northern) end of the pool. The water nearby is a todal lagoon – that further back is the Indian Ocean. (The auto water level pipe is at pool right.) Pic: Author 2007.

Retaining or selling older solar modules is often possible. Good quality solar modules have a working life of 25-30 years (with only marginally less output). They are, however, likely to be incompatible with new ones. This is because solar module electrical characteristics have changed. It may be possible to overcome this – but too costly to be worthwhile. There can also be re problems with upgrading in that a number of legal (and Standards-related) requirements have changed. This relates also to the ways solar is installed.

A further reason for upgrading is that gas prices have escalated. It is now far cheaper to heat a home by using reverse-cycle air-conditioners in their heating mode. The top models now use only a quarter of the power of the same nominal wattage as an electric radiator or gas fire. This may seem impossible but is really so!

With grid-connect systems, in most areas, it now pays to install more solar than you use yourself. This increases feed-in rebates. It will also produce more power during times of lower solar input. Upgrading an existing solar system, however,  has unexpected traps. There may, for example, be a limit on the excess amount. if so, the maximum is likely to be 6 -6.6 kW. Your installer can advise.

Those familiar with electrical systems could consider using the original solar modules in an electrically separate stand-alone system. This can currently (in 2020) be self-done legally (in Australia and New Zealand) as long as those modules are connected in a manner (e.g. series-parallel) such that the maximum  does not exceed 60 volts. But 48 volts dc is safer and more convenient.

An inverter may still be used to provide 230 volts. For Australia and New Zealand that inverter must be of the type that has inbuilt socket outlets. Appliances plug directly into those outlets (via a power board if required). Such inverters must not be connected to any fixed mains-voltage wiring.

The above could, for example, provide charging power for a small electric vehicle. Or via batteries, power 12/24 volt garden lighting, fountain water pumps etc. If at 48 volts it may readily power a dc brushless motor swimming pool pump such as the Badu range. If used only during the day, no batteries are required. (Our book Solar Success shows full details of how to do this – complete with our own actual example in Broome, WA.)

It is also feasible to retain that old system and have it paralleled to the new one – but that is strictly Certified Installer territory.

Our book Solar Success (now also in low priced eBook format) has all you need to know to undertake this work. It is also readily feasible if you have a friend who knows his/her way around solar or systems of this voltage.