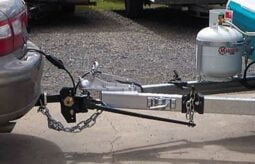 A Weight Distribution Hitch (WDH) assists to restore that otherwise ‘lost’ weight. In doing so, however, a WDH inherently reduces the rigs’ cornering ability.

Furthermore, a WDH reduces the speed at which a rig may become terminally unstable if subjected (for example) to a strong side wind gust from a passing truck. The tighter the WDH is adjusted, the lower the speed at which instability may occur.

That rig is likely to be safer with that WDH, but you need to accept its limitations and downsides – and how to adjust that WDH and drive accordingly.

For correctly laden travel trailers (i.e. weight mainly centralised), about 10% of the travel trailer‘s laden weight should keep the rig stable up to 100 km/h. If the tow ball weight is less than 10%, the rig may become unstable at lower speeds, particularly in emergency swerves at speed.

That tow ball weight is imposed on a hitch that is (on average) 1.2-1.5 metres behind the tow vehicle’s rear axle. With locally-made travel trailers, the imposed weight maybe 250-350 kg (550-775 lb). Increasingly, however, many new tow vehicles, however, are unable to cope with that weight. It may over-stress the chassis (or rear body structure) and/or the rear suspension and tyres. This particularly affects post-2015 vehicles as, in that year; most manufacturers of vehicles used for towing reduced the chassis thickness (from 3.5 mm to 3.00 mm).

How a Weight Distribution Hitch Works

The main failing (often overlooked) is that a WDH only addresses travel trailer down-force. It does not (and cannot) reduce the side forces imposed on the rear of the tow vehicle when the travel trailer yaws (sways). If, as not uncommonly, fitting the WDH extends the hitch rear overhang, it makes those yaw forces even worse.

The effect of yaw forces on the tow vehicle

If/when the rig starts yawing, those (yaw) side forces literally steer the tow vehicle by its rear tyres, and e.g. those side forces increase their slip angle. In emergency situations, this can cause the tow vehicle to oversteer. If that happens, and within a few seconds, sway forces escalate to jack-knifing. No matter how skilled this sequence cannot be driver-corrected.

The faster the rig is being driven the more serious the situation. This is because yaw forces increase with the square of the rig’s speed. In other words – the forces are four times greater at 100 km/h than at 50 km/h.

The speed at which the above happens is related to tow ball weight. The lower that weight the lower the ‘safe’ speed. This is why travel trailers with front-located water tanks were mostly recalled – as ‘safe tow ball weight relied on those tanks being full at all times.

For stability at speed etc all road vehicles have a margin of so-called minor understeer. If a vehicle is cornered too fast, understeer automatically causes that vehicle to take up a slightly wider radius – thus reducing the cornering forces. Understeer’s opposite (‘oversteer’) causes a vehicle to tighten its turning radius yet more and more – until that vehicle spins.

An inherent effect of a WDH is to reduce the tow vehicle’s margin of understeer. It is essential to adjust the WDH to keep that reduction within acceptable limits.

The Society of Automobile Engineers’ Standard J2807 requires that a WDH must never be used to level the rig. Doing so results in transferring excess weight to the tow vehicle’s front tyres, and reducing the weight on its rear tyres. This effect is often misunderstood (even by some WDH vendors). It reduces the essential margin of understeer.

The recommended so-called ‘50% Front Axle Load Restoration’ results in the front wheel arch of the tow vehicle being about 50 mm higher when the laden travel trailer is hitched up. The travel trailer‘s nose may be down slightly. This just fine – do not attempt to level it: those days have long gone.

Never use a WDH with a travel trailer, that when laden, weighs the same or less than whatever tows it. There is absolutely no benefit, and doing so may introduce undesirable effects.

All the above and a great deal more is explained (in plain English) in our (digital) book ‘Why Caravans Roll Over – and how to prevent it’. It is available in various formats – and costs far less than fixing a rolled travel trailer.

Whilst repeatedly being queried on a local caravanner’s forum, Land Rover’s position regarding the use of a WDH on its products is totally clear.

In Land Rover’s own wording. ‘Do not exceed the Gross Vehicle Weight (GVW), maximum rear axle weight, maximum trailer weight, or the trailer’s nose weight. Doing so can cause accelerated wear and damage to the vehicle, and adversely affect the vehicle’s stability and braking. Serious injury or death can also result from a possible loss of control leading to an accident.

In essence that which Land Rover is saying is that if you tow a sensible weight travel trailer you do not need a WDH. If you do use one, however, the action of that hitch adversely interacts with the Land Rover’s automatic levelling system.

RV Books cannot respond to any direct questions relating to why a weight distribution hitch limits cornering. Various other articles on this website address other issues relating to tow vehicle and travel trailer stability.