Fifth wheelers are safer – here’s why they are

Fifth wheelers are safer than conventional caravans. They are fundamentally far more stable on-road and far less likely to overturn. Furthermore, up to two metres more is usable space. They thus have more living area.

That fifth-wheel trailers are safer and stable was realised in the early 1920s following ongoing accidents with centre-axled ‘pig’ trailers. This caused the transport industry (led by Fruehof) virtually worldwide to switch to the fifth-wheel configuration. 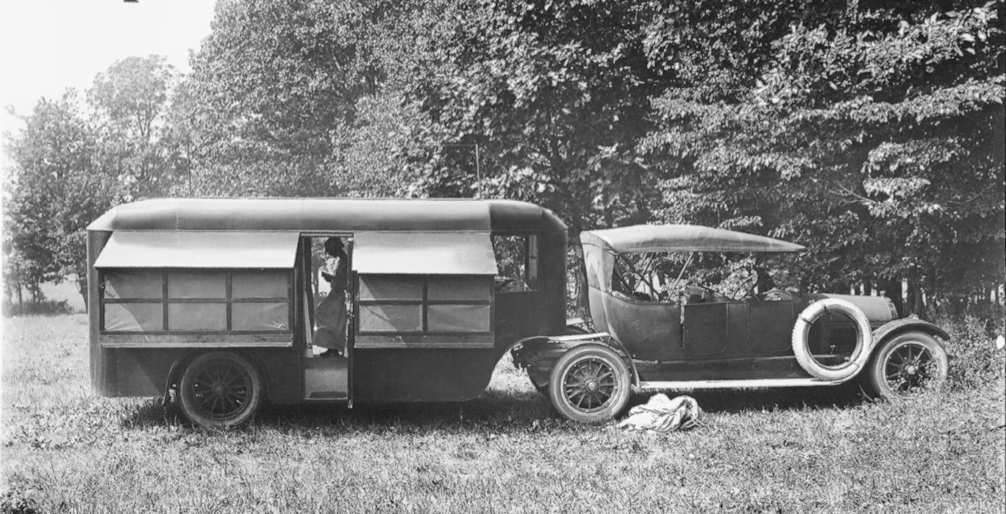 Why fifth wheelers are safer

A fifth-wheel caravan‘s on-road behaviour is totally different from that of a conventional caravan. The reason why fifth wheelers are safer, however, is fundamental.

Conventional caravans are towed via an overhung hitch. If the caravan snakes in one direction that overhung hitch causes (not just allows) the tow vehicle to snake in the opposite direction. And vice versa. It is a fundamentally unstable configuration. This undesirable effect can be reasonably tamed with short centre-heavy caravans. But less so with long and/or end-heavy caravans.

Snaking can also be almost totally overcome by using a Hensely hitch. These use a trapezoid linkage that, in effect projects the virtual tow ball further toward the tow vehicle’s rear axle. They are commonly used in the USA. Their main downside is their weight. A ‘light’ version is available but still too heavy for most Australian-used tow vehicles.

The essential overhung mass (up to 350 kg [770 lb]) of the nose of a conventional caravan is imposed on the rear of the tow vehicle. This causes the front of its tow vehicle to lift. That reduces the grip of its front tyres.

This lifting effect can be counteracted by a ‘weight distributing hitch (WDH)’. This, in effect, ‘levers up’ the rear of the laden tow vehicle. The WDH thus restores part (or all) of the undesirable front end lift. It does, however, introduce major stability issues. By reducing the weight on the tow vehicle’s rear tyres it also reduces their ‘cornering power’. This (to put it mildly) introduces undesirable dynamic issues.

The physics of towing (simplified)

Any trailer towed via an overhung hitch is inherently unstable. It can, however, be made reasonably stable by competent design, loading and usage. Pic: rvbooks.com.au

A conventional caravan is coupled to its tow vehicle via hitch well over a metre behind at tow vehicle’s rear wheels. If either caravan or tow vehicle (or both) are subject to a side force (e.g. change in road camber, wind gusts etc), they swing in opposite directions. The rig ‘snakes’. At minor levels, this may dampen out after two or three swings. If, however, a side force is excessive above a critical speed, the rig is impossible to correct. If/when that happens the rig almost always jack-knifes. Double Pendulum illustrated.

In physics terms, the overhung hitch of a tow vehicle pulling a conventional caravan introduces a mechanical 180º ‘phase change.’ It is that which results in inherent instability.

A fifth-wheel caravan, however, has its hitch located above the tow vehicle’s rear axle/s. If the trailer swings, it does not impose any undesirable force on its tow vehicle. It behaves predictably – much like the pendulum of a grandfather clock. That’s why fifth wheelers are safer. They are inherently stable and predictable.

For optimal stability, a fifth-wheel caravan needs its axle/s as far to the rear as possible. This results in a lot of its weight being carried by the tow vehicle. The amount is not critical but typically 15%-25%. As many suitable tow vehicles can carry 750-1000 kg (1650-2200 lb), tow ball weight is not an issue with lightweight construction. It becomes one, however, when customers and manufacturers seek bigger units at low cost.

A decade or so ago, Australia had many fifth-wheel caravan makers. Sadly, a lot of varying quality were imported from the USA and Canada. Many were and still are massively heavy. The only way to prevent them from flattening the typically used big Ford, Dodge or Chevy tow vehicle is to locate the trailers’ axles close to their centre. This causes an ongoing ‘rocking horse’ pitching. The resultant forces push the tow vehicle to and fro. This uncomfortable effect can be masked (but not 100% corrected) by using air-sprung hitches.

A different and saner approach is exemplified (in Australia) by Glenn Porch’s long, ultra-light units. The one shown above, of 11.3 metres, has twin axles set right at the rear. It weighs 3200 kg (7050 lb) and has a legal payload of 1300 kg (2850 lb). It can be pulled by a light tug. Glenn produced these mainly out of personal interest. He has advised that he has no interest in making any more. But if you ever see one for sale – buy it. See also: Ultra-light-caravans/

How fifth wheelers ‘feel’ on tow

The on-road ‘feel’ of a towed fifth wheeler is much as a motorhome. Cornering is similar except that the trailer’s rear follows a tighter radius. The turning circle is much smaller. Many can turn such that the tow vehicle is at a right angle to the fifth wheeler. They are also easier to reverse. They are barely affected by strong side wind gusts and only rarely snake. If/when they do they usually self-correct. Again, another reason why fifth wheelers are safer.

In Australia, the overall weight of a fifth wheeler and towing vehicle is limited to the GCM (Gross Combined Mass) of the tow vehicle. If the GCM is 4.5 tonnes and the tow vehicle weighs 2.0 tonnes, then the maximum weight of the fully laden trailer must not exceed 2.5 tonnes.

Whilst it is common to have 20%-25% of a fifth wheeler’s weight carried by the towing vehicle, that weight must not exceed the legal carrying capacity of that vehicle. In particular, it must not exceed the carrying capacity of that vehicle’s tyres. Nor of its individual axle loading. If necessary, the nose weight may be reduced, but 15% is usually recommended.

A curious quirk in Australian legislation requires a driving licence appropriate only to the Gross Vehicle Mass of the tow vehicle. As with caravans, a combination weighing seven tonnes may be legally driven by holders of a car licence. The equivalent limit for a truck is 4.5 tonne.

The case against fifth wheelers

Whilst fifth wheelers are safer, they need a dedicated tow vehicle. Their high nose weight (and lack of storage space) reduces that vehicle’s ability for general use. If the fifth wheeler is light enough however, dual cab Ivecos etc pull them with ease. The fifth wheel buyer needs to be weight-conscious. But that can be beneficial.

Intending buyers need to be wary of ultra-large and heavy (low-price) US units. Many are intended for permanent trailer park living and have only rudimentary suspension.

Caravan-tow vehicle stability is complex. For in-depth and constantly updated coverage refer to my major article Caravan Dynamics. Also the more technical Caravan and Tow Vehicle Dynamics. Every aspect of fifth wheeler design and usage etc is included in my Caravan & Motorhome Book. My other books include the Camper Trailer Book, Caravan & Motorhome Electrics, Solar That Really Works (for RVs) and Solar Success (for home and property systems). For information about the author please Click on Bio.