10 Tips for RVing Around Australia

10 Tips for RVing Around Australia

What does it cost, what is the weather like and which way to go. There are many ways to explore Australia in an RV. You can go around the outside, base yourself in one place and take short trips in different directions, or criss-cross through the centre. You can do ‘figures of eight’, zigzags and routes based on watching or taking part in events around Australia. Here’s ten tips for RVing around Australia. 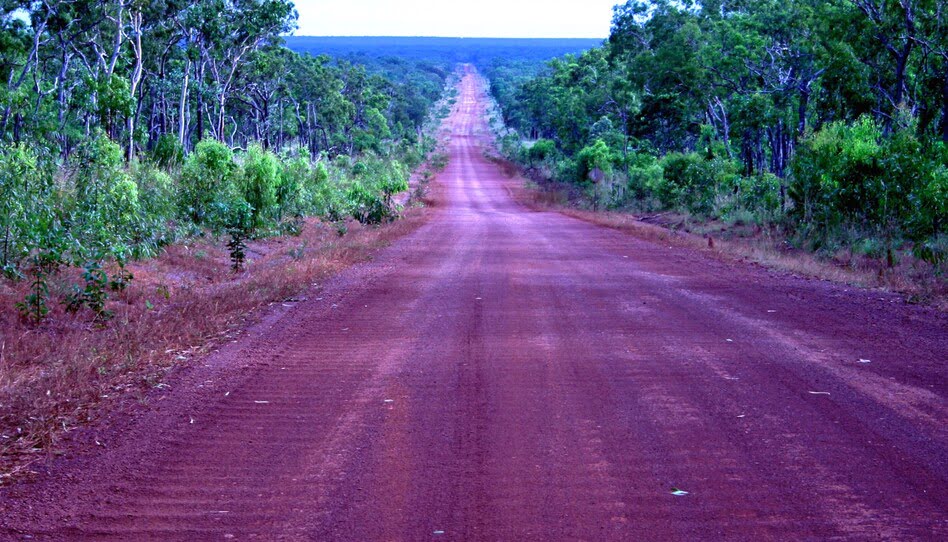 Be prepared for corrugations!

That most popular is to follow the shortest route around Australia’s coastline. It is 13,800 or so kilometres (8,625 miles). Allowing for diversions (such as Tasmania or Alice Springs and Uluru), this distance may double.

With wind speeds as high as 60 km/h, and particularly if you are towing a travel trailer, fuel usage will be much higher. To minimise this, the coastal route is best done anti-clockwise. Start down south in spring or summer (from Melbourne or Sydney) and head north – following the sun before winter sets in.

If you head west from Cairns or thereabouts, you will have strong and constant east-to-west trade winds across the top of the country behind you. You’ll also benefit at the bottom of Australia from west-to-east winds across the 1400 kilometre (875 miles) Nullarbor Plain on the way home.

For travelling around much of coast Australia, Highway One ranges from six-lane highways to single-lane roads. It is sealed most of the way except (in mid-2020) for a short section of the Roper Highway, a 206 km (about 130 miles) road in the Northern Territory of Australia.

Fuel is typically available every 350 km or so along Highway One, except between North-Western Australia between Broome and Port Headland – where it is a little over 400 km.

Highways One has rest areas with toilet facilities every 100 kilometres or so (62.5 miles) in the more remote areas. Most travellers consider it safe to stay overnight in these rest areas. Many do. You are unlikely to be alone. There are typically three to ten RVs there most nights (some 100,000 people a year do this trip).

Excellent and constantly updated guides are available on places to stay along the highway. Most towns have a travel trailer, but some are basic.

Highway One’s major downside is that it carries a great deal of heavy transport. Furthermore, it is not scenic for much of the way. Where feasible (assuming time is not a constraint) check out alternatives. Unless travelling with a 4WD and off-road travel trailer or camper trailer, seek local advice re road conditions. Some roads in the north and north-west are often closed during the wet season. This is historically November to April, but climate change has already resulted in non-seasonable rain and some flooding in a few areas.

There is an excellent road from south to north across the centre of Australia. It runs from Adelaide to Darwin via Alice Springs. Keep in mind that Uluru (Ayers Rock) is a 550 kilometre (about 345 miles) side trip each way from Alice Springs (and along a dirt track if you use the Merinee Loop road).

Going from east to west is approximately 6,500 kilometres (about 4060 miles) each way. Driving it is feasible with a travel trailer if you have the right experience. It really needs an ‘off-road’ travel trailer towed by a 4WD. There are several ‘start and finish’ points on each coast.

One major route is from far north Queensland, via Alice Springs, to Halls Creek in Western Australia. The route is scenic around Alice Springs, but otherwise flat and uninteresting. It is corrugated dirt for much of the way but progressively being bitumenised. This route (in 2020) really needs a travel trailer built for this purpose and a 4WD tow vehicle. This route is best attempted from April to September – as inland summer temperatures can approach 50 degrees C.

The Gibb River Road in North Western Australia’s vast Kimberley is truly scenic. It is dirt surfaced and has one usually shallow river crossing. A four-wheel drive is necessary to access most of the few camp-sites.

Those who have not visited Australia before need to be aware that long distances separate many towns. This is particularly so along most of Western Australia’s coastline, and the 1400 kilometre (875 miles) Nullarbor Plain (that connects east to west).

Of our ten tips for RVing around Australia, a major one is this. When you do reach a remote town, it may have only a single, and often basic, motel. In some places, the only habitation is a road-house: a fuel stop with often truly basic accommodation.

When driving, try not to cover more than 200 kilometres a day. Driving with a travel trailer in tow is more tiring than driving a solo vehicle.

Most Australian travel trailer owners start their journeys early in the morning. They attempt to reach their destination by early afternoon, including time for rest stops. Towing a travel trailer in the dark along an unknown road when you’re tired is not a good combination.

Another of our ten tips for RVing around Australia is that spotting a potential campsite at night is all but impossible. If feasible, check to see if there is a settlement (such as an Aboriginal community) where you could stay. Most welcome travellers.

Australia’s east coast (particularly in Queensland) is crowded during Christmas (it’s in mid-summer in Australia) and Easter. Any areas mentioned in the Lonely Planet Guide in the past ten years are likely to be booked out. There are, however, many lesser-used inland roads that run more or less parallel to the coast. These can be worth exploring.

Find out the school term dates of the state in which you will be travelling (these dates vary by state) and book travel trailer accommodation well in advance during school holidays. Most coastal travel trailers are fully booked months in advance. This is particularly true of Broome (WA).

Check out the dates of major events in each state or town (such as agricultural shows, car or horse race meetings and music festivals) and, depending on your preference, work your travel schedule into or around these events.

Tip 6 – Plan For All Seasons

Australia’s climate varies hugely from north to south, and from summer to winter. The southerly areas are usually comfortable in summer, but cold (0-15 degrees C) during winter. While outback Australia is usually hot during the day, in winter some parts reach temperatures below freezing at night. Plan your heating and clothing accordingly.

There is a wet season up north, typically from November to March, with some risk of cyclones and impassable roads due to creek or river flooding. Unless you are accustomed to 30 degrees C heat, and high humidity it’s best to avoid Australia’s top end in the wet season.

Never cross water-courses unless you know they are safe. Many have a strong flow of water across them. Consider water depth and speed carefully and learn how to drive across shallow water creeks.

Be flexible with your travel plans if bad weather intervenes. Some of the more enjoyable travel experiences can be unplanned ones. You have your accommodation with you, so why not use it? 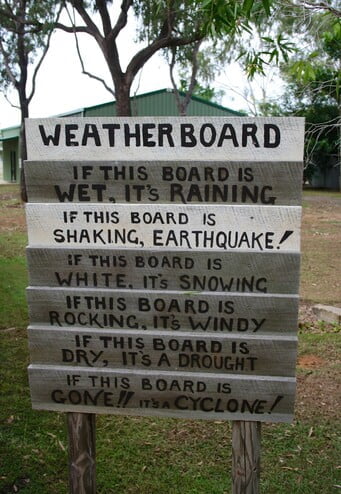 This is a major of our ten tips for RVing around Australia.

Much of Australia has a desert climate. It can be very hot and dry. It is essential to carry a least two/three litres a day per person of drinking water on your travels. Four to five litres per person per day is ideal.

The quality of water supplies varies across Australia, especially in the outback. The best type of water to carry is that sold in 12-15 litre plastic containers. These are stocked by virtually all supermarkets and fuel stations Australia-wide, and also stores in Aboriginal communities. Basic food and drink supplies are available at all road-houses, and even the smallest town will have a food store.

Unless deemed necessary (as on less-trafficked outback roads, do not tow a travel trailer with full water tanks – they increase van weight and can affect van stability.

Tip 8 – Leave The Travel Trailer Behind When it Gets Bumpy

Just because you have a travel trailer in tow does not mean you have to take it everywhere you go. Consider carrying a tent in the tow vehicle, and when the going gets tough, leave the van behind in a travel trailer (usually at a nominal charge) and go camping. Alternatively, just have day trips.

Another alternative is to rent a 4WD camper for remote areas or join a guided group tour. Group tours are recommended for those wishing to visit Kakadu and Lichfield Parks (near Darwin), Cape Leveque north of Broome, the vast Kimberley in general and the Cape York Peninsula. Cape York is a 2500 kilometre plus round trip along a seriously corrugated road (about two and half million corrugations).

Fuel stops on made-up roads in the more remote parts of Australia can be up to 375 kilometres (235 miles) apart. Unmade roads may not have fuel stops for 700-800 kilometres.

The cost of fuel in Australia, at typically $1.50 a litre ($5 a US gallon) is higher than in the USA but much less than in Europe. The cost up north is usually a third or so higher in the few major towns, but can be close to double in outback areas.

Fuel is, therefore, a major expense, but it can be reduced by not driving fast, by reducing weight, by not using cruise control in hilly areas and by having prevailing winds behind you (see Tip 1).

Here are the most important safety rules for travelling in outback areas: