All vehicle alternators first replace the energy needed for engine starting. The amount of that energy is tiny (about 4 watt/hours). It depletes a starter battery (in good condition) by only 2% or so. The alternator replaces that energy within two to three minutes.

These alternators, introduced around 2000, produce about 14.2 volts when the engine is cold. This voltage decreases to about 13.2 volts after 5 to 10 km as the engine heats up. Lead-acid and AGM battery charging, however, requires up to 14.4 volts.

Temperature compensating alternators charge an RV battery bank well enough to about 50% of full charge, but slow to a crawl after that. So-called ‘dc-dc alternator charging’ fixes that issue. The technique accepts whatever voltage the alternator puts out and boosts it if required – and usually fixes the problem. If not, the cause is usually interconnecting cable that is far too thin.

For them to work successfully, a dc-dc charger has to be located close to the RV’s battery bank. If that is in a travel trailer, the interconnecting cable needs to be 10 square millimetres (ideally 13.5 square millimetres) and taken via an Anderson plug and socket. This cable is costly but necessary.

Variable voltage alternator output is from 12.3 volts to 15 volts or more. Some such alternators drop to zero. Such low (or no) voltage causes havoc with RV battery charging. Fifteen or more volts can wreck batteries, and that below 14 volts is of little direct charging use. Furthermore, when output falls below 12.6 volts, that voltage-sensing relay drops out. The result of that relay drop out is to cut off auxiliary battery charging for two to three minutes each time it happens. That can be many times an hour.

Some dc-dc alternator chargers work with these alternators but need the voltage-sensing relay connected in another manner. Most auto electricians are now aware of the various solutions. If you still encounter issues; contact the dc-dc charger manufacturer directly.

A vehicle at speed has so-called kinetic energy. Standard braking dissipates that energy as heat. Rather than losing that energy, regenerative braking increases alternator voltage. As doing this requires more energy to drive it, the alternator assists braking. It works particularly well on long descents on free-ways, and also in local and city traffic.

Regenerative braking typically to works like this: the starter battery (called the ‘main’ battery in such systems) charges typically to 80% or so. Doing so requires the alternator to generate only 12.6 to 13 volts. That voltage is far too low for direct RV battery charging. During prolonged braking, however, that recovered energy (at 15 volts plus – via a substantially sized alternator) rapidly boosts the battery to 100%. The alternator voltage is then cut back to about 12.3 volts (or with some vehicles, to zero) until battery capacity falls to 80%. This cycle repeats every time the vehicle brakes.

For much of the time, such alternators thus generate only the voltage needed for the vehicle’s routine needs. It is okay for that, but far too low for charging auxiliary RV batteries. 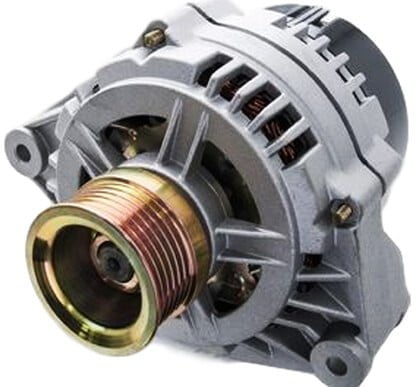 How to identify alternator type

Alternators used for regenerative braking are bulky. They are likely to have multiple or extra-wide drive belts, as shown above.

If you know your electrics, you can identify the alternator type by measuring its output across a range of driving conditions. You are likely to need to extend the meter leads. Keep them well clear of the alternator drive belt and radiator fan. Have an assistant check voltage over a range of driving – including braking for some distance downhill. Such driving may increase output to over 15 volts.

If output ever drops below 12.7 volts while driving – that is a variable voltage alternator.

(Do not attempt the above the voltage at a lighter plug’s socket – it may not work as some vehicles now have these outlets fed at constant voltage).

Experienced auto electricians should be able to help.

These drop below 12.7 volts at any time while driving. They require a specialised dc-dc unit and some attention to the voltage-sensing relay.

Companies tackling these issues include Redarc (Australia/New Zealand) and Sterling (UK). Both use the main (starter battery) voltage to know what the alternator is doing and optimise auxiliary charging accordingly. The units also protect auxiliary batteries against excess voltage.

Vehicles with variable voltage alternators monitor both load and charge via a chassis to starter battery cable – or a Y-shaped cable. Never alter this cable in any way. This cable doubles as a so-called ‘current shunt’. It assists in measuring all that’s going on electrically. If that cable is changed in any way it may cause the alternator to receive incorrect data that may drastically affect charging.

If you install appliances in RVs that use the chassis as a negative lead return – all such negative returns must be to the chassis side of this cable. The returns must not go directly to the battery negative terminal. Unless you follow this, charging cannot work correctly.

If two or more leads go to either of the main battery’s terminals, that system is faulty.