Knowing the solar input available for caravans is vital, especially up north. This article shows how to know that available and increase it too.

Knowing the solar input available for caravans etc. is like measuring rainfall. It uses Peak Sun Hours instead of inches or millimetres. Imagine an open drum that ‘collects and concentrates’ sunlight (rather than rain). When ‘full’, that drum contains one Peak Sun Hour (1 PSH). It is likely to fill in one hour in Alice Springs around noon on most days. In much of Australia’s south, filling one or two ‘drums’ during mid-winter takes most of the day.

The minimum likely is about 2.5 PSH/day for all areas except Australia’s south in midwinter. There, it’s too low to be effective. 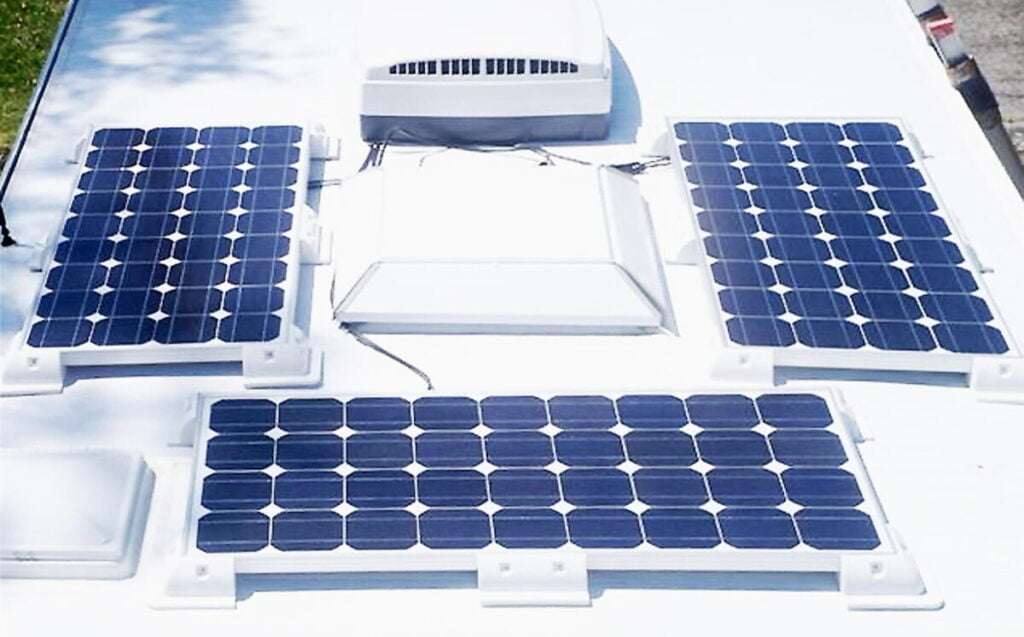 The PSH concept has a scientific background. The term ‘Peak Sun Hour’, however, was thought up by the solar industry. It is commonly but not technically recognised. One PSH is a solar irradiance (received sunlight) that averages 1000 watts/metre² on a horizontal surface for one hour. In reality, haze etc. results in a more probable 800 watts/metre².

In practice, even the best commercial solar modules are only about 20% efficient. Most are 14-18%, furthermore, there are heat and other losses. Solar input available is about 70-120 watts/metre² of surface area.

The daily solar input is thus 70-120 watt-hours times the daily Peak Sun Hours for each metre² of solar module area. It’s about 70% of that usually claimed.

Away from the tropics, about two-thirds of that input is during the two to three hours each side of noon. Depending on the season, solar input varies from 2 PSH (down south in winter) to 7-8 PSH in central and southern areas in summer.

Northern Australia has less variation. It’s about 5.5 PSH in winter and 6.5 in PSH summer. This is due largely to a high humidity layer. This absorbs some of the otherwise input. This often fools caravanners – who assumed the opposite. 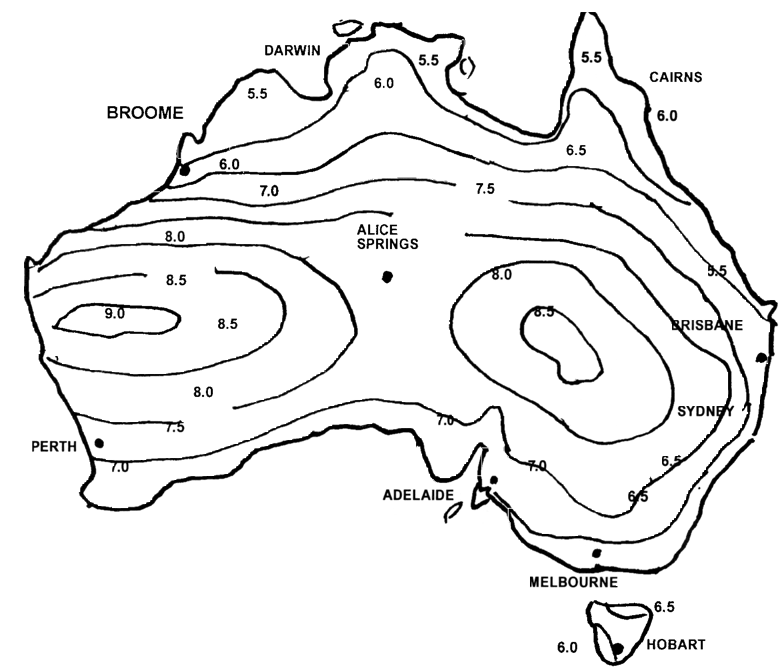 Based on NASA derived original data, this map shows the most probable (averaged) mid-summer solar output (in PSH) in Australia. This map is copyright rvbooks.com.au

Meteorological offices have solar input maps. The data, however, is in scientific units. My books Solar That Really Works, and Solar Success includes two maps that cover Australia. One is for mid-summer, the other for mid-winter. The maps are based on a ten-year running average (from NASA data). They are updated regularly. That for summer is shown above. There are daily variations. The totals provide only a general guide.

Solar modules do not need exact alignment. Most input is from 9 am to 3 pm when alignment is less critical. Furthermore, the sun’s effect is far from a ‘shaft of light’. It’s often diffused. Accurate alignment consequently makes little difference.

This is confirmed by the Australian Solar Radiation Data Book. That, for Adelaide during January, shows the difference between the 10º optimum and horizontal is only 0.16%. Even 20º error makes only 4% difference.

Across much of Australia, variations of plus/minus 20º, in north-facing or tilt cause under 5% difference. Where space allows, compensate by increasing (now very cheap) solar capacity.

Amorphous solar modules are less efficient, but only marginally heat affected. They are flexible, thus handy for curved roofs. They can even be glued on. If doing so, glue them on an aluminium sheet attached to the roof. Doing so eases possible repairs.

MPPT solar regulators are often claimed to increase solar output. They cannot do that as such. What they can do is recover input otherwise lost. They ‘juggle volts and amps’ to optimise watts.

The common claim of ‘ by up to 30%’ is valid. That rarely revealed, however,  is that increase is for an hour or two early and late in the day. Input then is tiny. An extra 30% (of very little) is barely worth having.

Until a few years ago, solar capacity was relatively expensive. It is now so cheap that, unless you need a minimal system for lighting only, have as much solar capacity as feasible. This will ensure batteries fully charge even overcast days. It will also provide adequate input in various areas and/or seasons.

Another good guide to existing RV systems solar input is this. Unless your batteries are fully charged by midday most year round there will be insufficient input up north excepting during mid-winter.

As solar capacity is now so cheap, it’s well worth having excess. The associated solar regulator precludes overcharging. What does not work is to increase battery capacity alone. Doing that’s like opening further bank accounts for the same money deposited. All it does is to increase storage losses!

Furthermore, battery charging/discharging loss is typically 20%. Increasing capacity unnecessarily is counter-productive. The more costly LiFePO4 batteries, however, are better in that respect. Their loss is about 5%.

As noted above, many RV owners assume that tropical solar input is greater year around. This is not so. The input during a tropical winter is typically 5-5.5 PSH/day, and 6.0-6.5 PSH/day in summer. There are also be fridge issues: in particular that not only is it hotter all day – it stays hot all night too. Fridge energy usage is usually 40% higher.

Given adequate solar capacity, an RV electrical system should run from solar or 95% or so of the time. There can, however, be atypical periods of overcast days. Smoke from major bushfires will reduce input to almost zero.

A need for generator back-up primarily relates to your desire for frozen food. If you replace that by vacuum-packed food, you can do without a generator. If you do need one, use it only to charge the battery/s via a high-quality charger from the generator’s 230 volts output. Never from the 12 dc outlet: that outlet is intended for running 12-volt devices directly. Its output (even if marked ‘battery charger’) is an unregulated 13.6 volts or so. That is far too low for effective charging.

This topic is not possible to fully cover in article form. If you find this one of value, there’s a huge amount more in my books.