Australia has two main and seemingly interdependent caravan industries. One makes caravans of varying stability. The other makes devices (of varying effectiveness) intended to increase that stability. Both are curious. Not all makers appear to understand the more basic laws of physics involved. Or perhaps assume immunity from them. So presumably do owners of ultra-long caravans. With a few rare exceptions, there is a caravan design need for change. And for caravan owners to realise a caravan’s inherent stability issues.

Known for over 500 years

The basic causes of caravan and tow vehicle instability have been known and understood for over 500 years. Despite this, some caravans embody principles known as unsound even back then.

Caravan design need for change – moments along a beam

Around 1480, Leonardo da Vinci (in his ‘Codex Flight’) noted that ‘a body in motion desires to maintain its course in the line from which it started’.

Overlong caravans, particularly those with rear-hung spare wheels defy the effects of ‘moments along a beam’ (the see-saw effect). Yet Galileo (around 1600) noted the adverse effect of such moments in a (published) discussion. It was raised again, by Leibniz, in 1684.

In 1686, Isaac Newton in his ‘Principia Mathematica’ noted that a ‘body in motion would stay in the same motion unless acted upon by another force’. Some caravan makers and caravan owners alike are unaware of, overlook or grossly underestimate that ‘another’ force. That force can be a strong sidewind gust, strong emergency swerving etc.

Originally, most heavy transport trailers were towed (as today’s caravans) via a hitch overhanging the rear of the towing vehicle. This worked well initially. Increasingly powerful engines, however, soon enabled speeds exceeding 30 km/h. Jack-knifing and rollovers then became increasingly common.

In 1920, the USA’s Fruehauf transport company realised their cause was that tow hitch overhang. Fruehauf realised that an overhung hitch does not just allow a central-axled trailer to yaw anticlockwise if/when the tow vehicle yawed clockwise. It causes it. Fruehauf accordingly located that hitch directly above the prime mover rear axle. The resultant so-called ‘articulated rigs’ have been used for heavy goods road transport ever since. 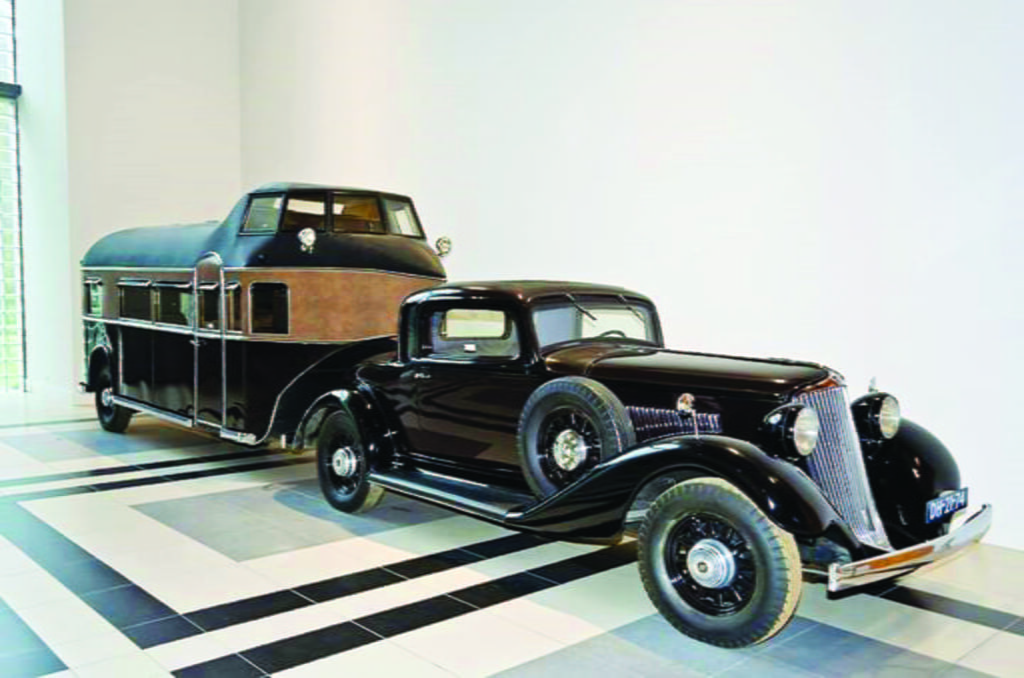 The 1932 Curtiss Aerocar. The tow vehicle is the 1932 Graham-Paige. It was used by financier Hugh McDonald as a mobile office for his daily journey to and from New York. It had passenger accomodation plus a full kitchen and bathroom. His staff, includied an on-board chef. Pic: HET National Automobile Museum, Steuweg, 8 NL.

With some exceptions, between 1920-1935, many Americans used the fifth-wheel format. They used large coupes modified such that a tow-hitch was located much over the otherwise rear passengers’ seating. The passengers were carried in the fifth-wheel caravan. Most other countries, however, opted for the caravans towed via that overhung hitch. But right from the beginning, jack-knifing was common.

A caravan is not unlike a see-saw (its wheels form the pivot). As with a see-saw, the effect of we call ‘weight’ (the pull of gravity on any mass) on that caravan depends on how far weight is from its axle/s. An 80 kg adult a metre from the axle is readily balanced by a 30 kg child at the caravan’s far end.

Likewise locating a (say) 20 kg spare wheel at the far rear of a seven-metre long caravan causes its effective weight to be 70 kg. Some caravans have two such wheels. If that caravan pitches or yaws the effective weight of those wheels is far more (as they resist that movement). Do some caravan makers or owners not realise this? Or do they simply do not care about its inherently adverse effects?

This issue is often raised on forums – with naive responses that to the effect that the ‘all is fine as the caravan has been designed accordingly’. Physics does not work like that.

No Australian Standard addresses this issue. The national trailer standard, VSB1, states ‘There are no specific body structural requirements, but the trailer must be safe and fit for purpose.’ It is suggested as a minimum that the manufacturer should be able to demonstrate that the structure is capable of supporting the designed payload with a ‘safety factor of at least three for highway use and a safety factor of five for off-road use.’ It does not, however, comment on its stability – nor do any other Australian Standards or regulations.

Nor is caravan stability mentioned in the Caravan Industry Association of Australia Ltd RVMAP Code of Practice. Page 24 of that industry’s towing guide, shows without comment, a caravan that has two bicycles and a motorcycle on the rear of a caravan – yet comments only that they are obscuring the number plate. https://caravantowingguide.com.au/pdf/TowingGuide2018.pdf

Caravan stability is addressed in the USA’s J2807. Initiated by Toyota in 2010 this standard is now followed by all US and the top three Japanese vehicle makers. It sets out the performance requirements for determining tow vehicle gross combination weight rating and trailer weight rating.

A caravan and tow vehicle’s stability is co-dependent.

Assuming correct loading and tow ball mass, excess caravan length is a major cause of caravan instability.  (Weight, if centralised, is less of an issue).

A reasonably stable caravan will become unstable if the tow vehicle is lighter or much shorter, or has too low air pressure in its rear tyres. Or the caravan has too low tow ball mass.

For any combination of caravan and tow vehicle, there is a critical speed. That critical speed is unique to each rig and is related to many factors including tow ball mass and caravan length and loading.

Once at or above that critical speed which jack-knifing is far more probable in the event of an emergency swerve (or strong side wind gusts). For most Australian rigs that speed is not that much over 100 km/h. For some rigs, it will be well below 100 km/h. (The lower the tow ball mass – the lower that critical speed).

The effects of a WDH

The reason why is that a WDH can only compensate for vertical loads – by moving the effect of (some) weight from the tow vehicle rear wheels – to the front. It does not, however, reduce the side loads when a caravan yaws or starts snaking. This is a serious issue as the lessened weight on those rear tyres reduces their ability to cope with those side loads.

Caravan reality is that if you need a WDH you are placing loads on a tow vehicle neither designed nor intended to withstand those loads. That WDH also reduces the vehicle’s intended understeer. This may prejudice its handling in emergencies. It that tow vehicle oversteers at speed, jack-knifing is all-but-inevitable. That is their prime cause.

If buying a new tow vehicle, choose one that has the maximum wheelbase (i.e. the distance between the front and rear axle). Also, when fully laden, weighs at least as much as the fully laden caravan. When towing have the tow vehicle laden to its legal maximum. If the fully-laden tow vehicle weighs less than the laden caravan, never exceed 100 km/h. In stating this, RV Books does not imply that towing such a weight at 100 km/h is safe.

Ensure, by weighing on a certified weighbridge, that your laden caravan is not overweight. Ongoing police checks show that most are overweight – one was 400 kg over its legal maximum.

Never have anything heavy at the far rear of a caravan. That many caravans have spare wheels there is contrary to the laws of physics, not just common sense. And why two spare wheels – when tow vehicles have only one? Many recently-made vehicles do not even have a spare wheel. They have a repair kit plus an inflator.

A WDH is only necessary if attempting to tow a caravan that is heavier than the tow vehicle maker intended.

If using a WDH never adjust it to more than 50% correction. Contrary to ongoing forum mal-advice do not adjust that WDH to have the caravan and tow vehicle level. When correctly adjusted the caravan’s nose weight should cause the rear of the tow vehicle to be about 50 mm lower.

Use a tow hitch with the shortest possible overhang. Even excess millimetres should be avoided. If necessary have a machine-shop shorten that tow hitch.

Friction-based sway control is effective, but only at low speed. This because frictional forces remain constant: the sway forces they seek to control, however, increase by the square of the rig’s speed. At 100 km/h that friction is a close-to-useless 1%. This inherent limitation is recognised in the UK and EU. There, the excellent AL-KO friction tow-ball handles low to medium speed sway (yaw). Likewise, electronic stability control acts (if needed) at higher speeds. 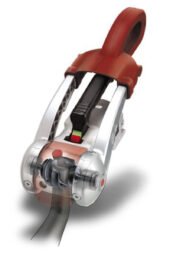 Do bear in mind that even the best-designed caravan will be rendered unstable unless laden correctly. Here, much forum advice can seriously mislead. Caravans MUST be laden such as most weight as possible is located close to (and preferably over) the axle/s. The required tow ball mass must only be achieved this way. Moreover, never increase tow ball mass by adding sandbags etc at the very front.

Ultimately, caravan and tow vehicle behaviour depend on hand-sized rubber oval sections’ grip on the road. Bear in mind that on dirt roads that grip is on loose gravel – or corrugated dirt. It is not unlike driving on ball bearings.

Never tow at over 100 km/h. Moreover, always bear in that caravan stability requires adequate tow ball mass. Furthermore, the lower that mass the less stable that caravan at speed.