Blade fuse problems in caravans – they may burn or melt

Blade fuse problems in caravans include fuses and fuse holders burning or melting. Fire risk is high because the fuses may continue to conduct. Ongoing current flow, however, may heat the fuse holder to burning point. This article by RV Books explains why and how to overcome the risk.

The blade fuse problems in caravans and motorhomes (and particularly boats and 4WDs used on beaches and camper trailers) are mostly caused by exposure or partial exposure to damp air, dirt and water. This corrodes the fuse holder and fuse contact surfaces. Because of this, older RVs are the most at risk. Typical burnt blade fuse and holder. The fuse and fuse holder has melded into a solid lump. Pic: redarc.com.au

As can be seen, the larger size has substantially more contact area.

There can also be blade fuse problems in caravans with poor quality versions of the larger sizes fuses and holders. Some have next to no protection against even mild corrosion. This causes them to resist current flow, usually partially melting the holder but not necessarily the fuse. This results in a major risk of fire – especially if the wiring’s insulation is also burned. It may expose current-carrying copper that, then allows full battery current to flow – possibly to earth. This can and does cause fires.

If feasible, by fuses and fuse holders from specialist electrical suppliers, not hardware chains, as there is a surprisingly large range in their quality.

Long term blade fuse problems in caravans are also indirectly caused by badly crimped cable lugs. The resultant poor contact eventually allows corrosion between the copper and the lug. Heat builds up, in turn heating up the blade fuse holder. 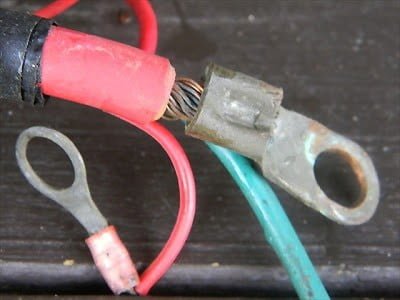 This cable is only barely in contact with the crimp lug. Pic: original source unknown

A correctly formed crimp creates a cold weld. To achieve this it is 100% essential to use a proper crimping tool (as shown).  A good ratchet type crimping tool, as shown below, is not cheap. One’s like that form that essentially needed cold weld (i.e. an inter-molecular bond). It is impossible to do this with pliers or plier-like cheap crimping tools. They may be satisfactory for a year or two but, over time, inter-metal corrosion will set in.

Use only a crimping tool like that shown: they are not cheap, but a badly crimped lug can set a caravan on fire! Pic: RV Books.

Blade fuses. That most typically used is shown on the right. Use the Maxi version (left) for fuses of 10-15 amps and over.

For direct current (DC) circuits it is preferable to use the DC circuit breakers stocked by marine electrical suppliers. Cheaper versions are available but are very temperature sensitive. This, in particular, is not an area to cut costs via eBay specials. 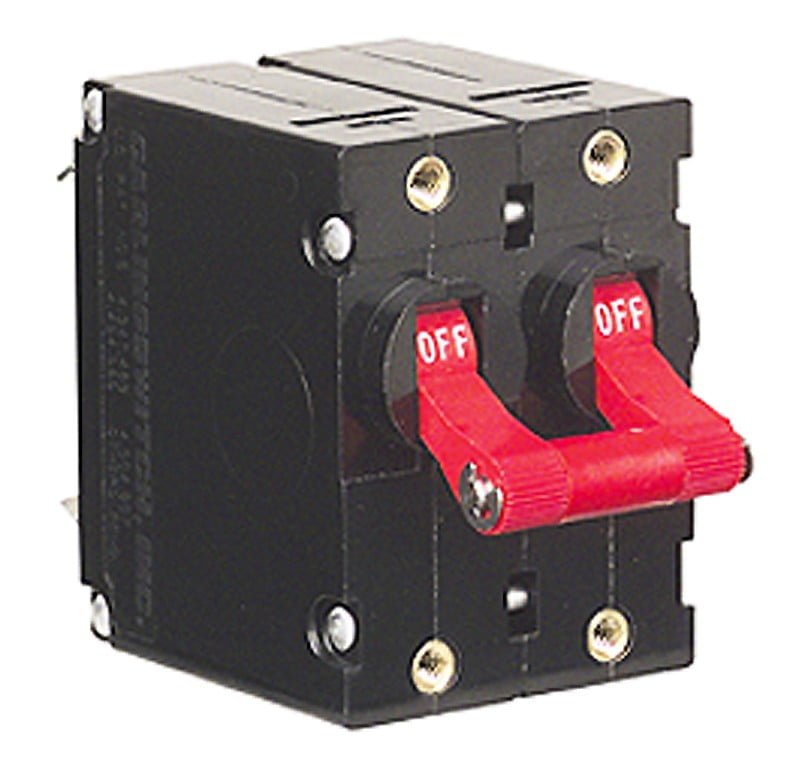 Every aspect of RV electrics is covered in detail in my Caravan & Motorhome Electrics. Solar That Really Works is for cabins and RVs. Solar Success is for homes and properties. My other books are the Camper Trailer Book and the Caravan & Motorhome Book. For info more about the author Click on Bio.

Please post a LINK to this article on forums if you feel it would assist problems in this area.