Grid connect solar problems – what vendors may not reveal

Grid connect solar problems include, false promotion and vendor claims, incompetent installation etc. Here’s what vendors may not tell you.

Q. Must solar panels be at an exact angle?

A local installer says my existing 1.5 kW system’s modules must be at exactly the same angle as my latitude. They are only a few degrees out. He says will fix them for $1000 – and they’ll then produce a lot more. Is this a scam?

A. He’s after your money! In most areas plus/minus five degrees make less than 1% or so change. It may result in a little more in summer than winter – or vice versa. If less than five degrees there will make next to no change. It is desirable to have them face more or less into the sun around midday. But, here again, a few degrees does not matter.

Q. Do I need after-sales service?

My installer seeks $250 a year for ‘servicing and tuning’ my 1.5 kW grid connect system. Do I really need that?

A. This too is a scam. Solar needs no servicing, let alone ‘tuning’. Unless the modules are truly dirty, there is likewise no need to clean them. Occasional rain does the job. Our own grid-connect system (north of Sydney) remains unwashed since 2010. There is (as of 2020) no measurable loss.

Q. Do I need a tracking system?

I live in the south of Australia where the sun is much ‘lower in the sky’ in winter. My installer advises using a $5000 (plus $1000 installation) tracking system for my proposed 1.5 kW grid-connect system. He claims it will save the amount of solar capacity otherwise needed by about 30%. Is this true?

A. What he claims is true. But has not revealed that tracking systems are costly and need ongoing servicing. It is hugely cheaper to accept that loss. You can add another 450 watts more solar for a probable $1000! And zero maintenance. Use another installer.

Q. How do I work out the grid-connect size I need?

I’d like to install enough grid-connect solar to halve my existing power bill. Installers say they need to calculate how much electricity is used and quote accordingly. Is there any way I can tell if they are selling me more than I need.

A. This is routine practice. The best way to start, however, is to reduce existing usage. (We slashed the previous owner’s 31 kWh a day to 4.1 kWh a day summer and 9 kWh in winter).

It costs some money up-front, however, savings are huge over time. That alone will achieve the ‘halving’ you seek. Adding solar then – and only then, will drop it yet further. It is not feasible to explain how in an article. My book Solar Success shows exactly how to do it. It includes actual examples (including our own). Unless you do this, the installer will scale the system to the existing usage.

Q. Is it true that most grid-connect systems produce less than claimed?

My 2.4 kW grid-connect solar system has only produced the claimed input twice (for a few hours) within a now five years. The most I get is 2.2 kW. It’s often less. Should I ask for a rebate?

A.  Solar module reality, to put it tactfully, is curious. The typically claimed output can only be achieved under laboratory conditions. Such conditions do not replicate typical usage. The output you have is typical.

A solar module’s output in typical usage is shown in makers’ technical literature. It is even revealed on the back of most solar modules (but out of sight once installed.) It can be seen (below). The test laboratory claims (also use for promotion!) are in column 2. The ‘real-life’ output is that in the third column. Here, a nominally 120-watt module is shown as having a typical output of 87 watts. 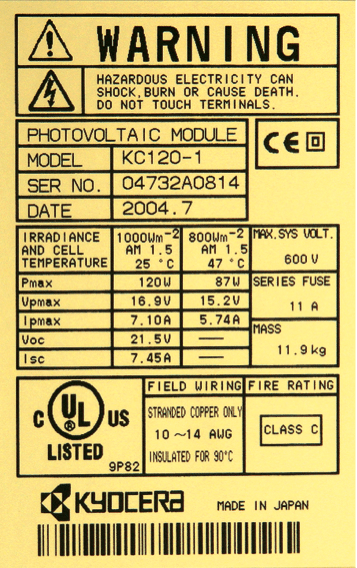 The promoted output of this module is 120 watts. Column 3, however, reveals that its solar reality is 87 watts.

I do not know of anyone taking legal action re this. But all installers I have discussed this with agree my statement is correct. Their installation report (needed for rebate claims) reveals the ‘true’ output.

My 2.4 kW grid-connect solar system produces about 7 kW hours a day in winter, and about 15 kW hours a day in summer. Our home uses about 21 kW hours/day year-round (we have gas heating). The rebate only cuts our electricity bill by about $100 a year! Is there anything I can do about this?

A. The enquirer and her partner are away from home during the weekdays. They export almost all they generate for a few cents a unit, yet pay 27 cents per kW hour during the day over weekends, and 67 cents per kW hour during every evening. Most electricity companies, however, have flat rates. This is typically less than their peak rate. Switching to that alone halves the bill. It is usually well-worth checking rival suppliers. Many offer discounts for changing to them.

As I use most electricity at night, is it worth adding battery back-up to my grid-connect solar system.

A. Most recent grid-connect systems have in-built provision for this. If not it’s possible but costly.

Q. Going totally off-grid – is it worth doing?

I have a 3.6 kW grid-connect solar system. On most days I have far more input than I use. Is it worth disconnecting from mains (grid) power and add a battery for use at night and during periods of low solar input?

A. You can do this, but it only makes financial sense if you are paying over $1.30 a unit (a unit is 1.0 kW hour). It also necessitates installing an inverter made for stand-alone use.

Right now it makes far more financial sense to use solar and a battery bank for semi-continuous and continuous loads, like refrigeration, entertainment, computer, and LED lighting etc. Retain the mains (grid) supply for long periods of cooking and heating etc (i.e. as a ‘virtual battery’). This approach (I use myself) is a better solution financially for some years yet.

I have a home very close to the sea. Sometimes the output shown on the energy monitor jumps to way over the claimed system output (but only for a few minutes). How is that possible – and what causes it?

A. This can indeed happen. It is, as you say, usually for only a very short time so adds only a little to the daily input. It occurs where a nearby surface is reflective (as an expanse of water or light sand). Sunlight is received directly by the solar modules, but some light is then reflected upward from that nearby surface. If there is scattered white cloud, that cloud may then reflect that energy down again. It increases that received directly. The increase may be as high as 20%-35% but there is usually no overall gain as the scattered cloud also reduces the solar input for most of the time.

The solar array (above) on the roof of the author’s home at Church Point, NSW, has the effect described above. Sunlight is reflected back up from Pittwater – about 50 metres away.

The issues raised here, plus many more, are covered in depth in the author’s book Solar Success. It sells globally and has literally saved buyers thousands of dollars on their installations. My book Solar That Really Works relates to solar for cabins and RVs. My other books are the Caravan & Motorhome Book, Caravan & Motorhome Electrics, and the Camper Trailer Book. For information about the author please Click on Bio.