AGM batteries for caravans – they are still worth using

AGM batteries for caravans, camper trailers and, motorhomes charge faster and deeper than lead acids and are more rugged mechanically and electrically. They have far less internal discharge. If initially fully charged, they retain 60% or more for over 12 months (except in very hot areas).

AGM batteries for caravans also have another, often overlooked advantage. They withstand deeper discharges with less damage than conventional batteries. Their life however is still related to frequency and depth of discharge. Trojan says its AGM batteries withstand 2000 cycles if routinely discharged by 30%. That drops, however, to 1000 cycles at 50%. In essence you buy usable amp hours.

So-called ‘effective capacity’ is interesting. In effect it is a battery’s ability to maintain voltage under load.

A LiFePO4 of almost any size above 18 amp hours can supply any RV load with almost zero voltage drop. There’s no way an AGM bank of 100 -200 amp hours competes. But once over 300-400 amp hours, an AGM battery bank will readily cope with anything an RV needs. 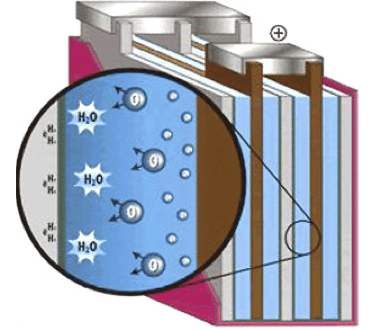 AGM batteries charge well from most pre-2000 vehicle charging systems. Many post-2000 vehicles, however, have temperature compensating alternators. These vary from 14.2 volts when cold, to 13.6 volts after some minutes. This is too low for adequate charging voltage. Such alternators need a dc-dc alternator charger.

Many post-2013 vehicle have variable voltage regulators. These vary from battery damaging 15.4 volts- to non-usable 12.3 volts. Or even zero. These require a bc-dc alternator charger.

Excess float charging voltage damages AGMs. Many (such as LifeLine) need only 13.0 volts. Some chargers however cannot be set below 13.4 or so volts.

Heat damages batteries. The higher that temperature, the faster its chemical reactions. Trojan says ‘every month of operation at 35°C is equivalent in battery life to two months at 25°C’. Starter batteries are thus located in the coolest under-bonnet space. Any added under-bonnet battery thus runs even hotter. Do not locate an AGM battery in a hot place. If external, shield it from direct sun.

AGM batteries have a shorter life-span than sensibly used conventional batteries. But few such are so–used. In practice, AGMs last longer. They do, however, cost more.

Do not parallel AGMs with lead acid batteries. If you do,they unequally charge.

An AGM battery has its electrolyte (water/acid mix) within a glass fibre matrix. Whilst charging, oxygen is produced on the positive plate. That, aided by pressure within airtight cells, recombines with hydrogen from the negative plate. This enables the batteries to be fast-charged without water loss.

AGMs may be orientated any way except upside down. They must be in a well-ventilated compartment. Whilst normally sealed, release valves open if pressure becomes dangerously high. Early advice, that AGMs don’t ventilating, was long withdrawn. Manufacturers now insist it is vital.

For explicit details see Caravan & Motorhome Electrics, Caravan & Motorhome Book. Or the Camper Trailer Book. Solar is covered in Solar That Really Works (for cabins and RVs). Solar Success is for home and properties. For information re the author Click on Bio.

This topic is often raised on RV forums. If you feel it assists consider posting this Link in appropriate threads.