Why Caravans Roll Over – Sample Chapter 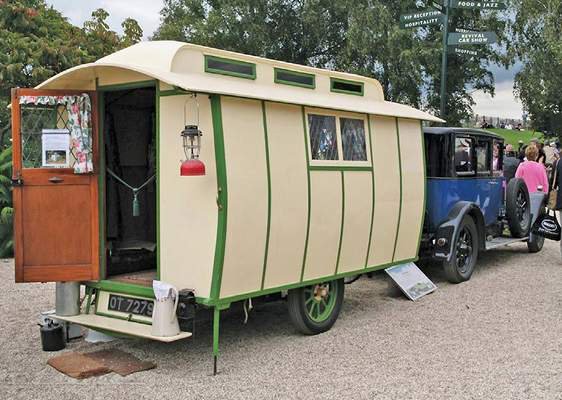 Why and how caravans sway

There are two main types of vehicle-drawn trailers: dog-trailers and pig-trailers: (why such trailers are so-called is unknown).

Dog-trailers have two or more axles. One axle (at the front) pivots, or has so-called Ackerman steered wheels (as used at the front of cars and trucks). Either way enables the trailer to be steered by the vehicle’s drawbar.

Such trailers have long since proved stable. Many load-carrying commercial versions are used to this day – but the dog trailer configuration (Figure 1.1) is now rarely used in caravan form.

In practice, dog trailers shimmy slightly on rough roads but are not prone to ‘wagging the tail’ of whatever tows them.

Pig-trailers (Figure 1.2) have single or double (and sometimes triple) axles. These are ideally positioned and laden such that the trailer is about 10% nose heavy. Chapter Four explains why.

Pig trailers are coupled to the tow vehicle via a hitch at the rear of that vehicle - well behind the centre-line of the tow-vehicle’s rear axle.

In their original (late 1890s) commercial load-carrying form, pig trailers rarely exceeded walking speed and stability was not a problem. By 1920, however, vehicle speeds had increased and such rigs increasingly jackknifed and overturned. Even back then, the pig trailer concept was proving fundamentally unstable.

Around 1921, US trailer maker Fruehauf realised that if the trailer yawed in one direction, that overhang hitch not just allowed, but caused, the tow vehicle to yaw in the other direction.

If the tow vehicle or the pig-trailer yaws (sways) each, via that overhung hitch, exerts side forces on the other – but in the opposite direction. Friction and other damping reduces yaw but only effective at low to medium speeds. By 100 km/h it has negligible effect (see Chapter Four).

Fruehauf further established that the shorter the hitch overhang and the longer the tow-vehicle’s wheelbase (distance between its front and rear wheels) the better. The company also found, and it later became clear why, that the laden tow vehicle needed to be at least as heavy as the laden trailer, and that the greater that ratio, the better.

Having established the major cause of instability was hitch overhang, Fruehauf took that finding to the extreme: that locating the tow-hitch directly over the tow-vehicle’s rear axle/s eliminated that instability. So why have any at all? Fruehauf’s solution firmly established the fifth-wheel concept. It had been used, in 1917, in a one-0ff fifth-wheel caravan designed by Glen Curtiss, but did not become popular (mainly in the USA) until the early 1930s.

If the tow hitch is directly over the tow-vehicle’s rear axle neither tow vehicle nor trailer yaw will affect the other (Figure 1.4
).

Like the pendulum of an old-fashioned grandfather clock, that trailer is free to move. Wind gusts may cause the trailer to yaw slightly, but that yaw has no effect on the tow vehicle - or vice versa. Driving a fifth-wheel caravan rig feels much like driving a motorhome.

Whilst conventional caravan stability issues are primarily caused by tow hitch overhang, many other aspects are involved. Almost all, however, are associated with, and ultimately determined by hand-sized patches of rubber: i.e. the tow vehicle’s and (but less so) the caravan’s tyre contact patches that grip the road.

How contact patches do that profoundly affects every aspect of how tyred road vehicles behave. This is covered in the following Chapter.

Figure 1.4. Locating the tow hitch directly above the centre-line of the tow-vehicle ensures that if either part yaws, no forces are transferred to the other. The configuration is fundamentally stable. Pic: rvbooks.com.au.

Buying an RV is a major investment. For many it will be second only to buying a house. It’s not a project to be undertaken lightly.  You need to take the same care you’d take when buying a car or buying a house.  Because your RV will be both - it will be your home and your means of transport.  When you carry your home with you there are things, sometimes unexpected or surprising things, that you’ll need to know.

How to Choose and Buy an RV has been written to be your guide in the process.  Collyn Rivers has brought together his background as an engineer, his experience on the road with many different RVs and his background as journalist and author to create a book that will walk you through everything you need to make the right decision.

Should you tow a caravan or get a motorhome? If you choose to tow should you choose a camper-trailer, a conventional caravan or a fifth-wheeler? There are a bewildering number of RV types to choose from. You’ll want to know which really suits the kind of travel you plan.  This book lays out the plusses and minuses of each.

What sort of layout will work best for you?  Do you need an annexe? How about a microwave and TV?  What sort of toilet and shower should you travel with? What accessories do you really need and what can you live without?

How to Choose and Buy an RV is packed with the solid information you need to make an informed choice.  If you already own an RV you’ll discover things that will make you think “If only I’d known that at the time”. If you don’t own one this book can be your adviser and your guide as you make one of the biggest financial decisions you are ever likely to make.

How to Choose and Buy an RV has just been published and the paperback version and is only available from Amazon. It will reach the booksellers in the next few weeks. We'll add links as they become available.

How to Choose and Buy an RV is currently available for Kindle.  Members of Kindle Unlimited can read the Kindle version for free. If you would like this book to be available for other readers please contact RV Books.

Please send feedback about the book.  And please review the book once you've read it.