Domestic swimming pools need their water recirculated and filtered at least every 24 hours. To do this most have basic 230 volt induction motor pumps that can be driven by solar, but doing so is inefficient and costly.

We’d intended to obtain our (Broome) solar swimming pool’s recirculating system through the (then) remote area rebate scheme, but all suppliers insisted on either a freestanding bank of solar modules, regulator, inverter and batteries or doubling the size of our main system. Their averaged quote (prior to rebate) was around $60,000 including ‘design’ and labour. We knew there were better approaches but as no supplier would consider any we decided to forgo the rebate and designed /installed it ourselves.

The total cost, including concrete and steel for the cyclone-resistant solar mountings and all the electrics etc came to less than $8000. As the system ran at a nominal 48 volts dc, a licensed electrician was not required for its installation.

Calculating the pumping capacity needed to recirculate the 35,000 litres of water showed this to be readily achievable by one of the (then) Lorentz Badu Top range of 48 volt dc brushless motor units via an associated MPPT controller. 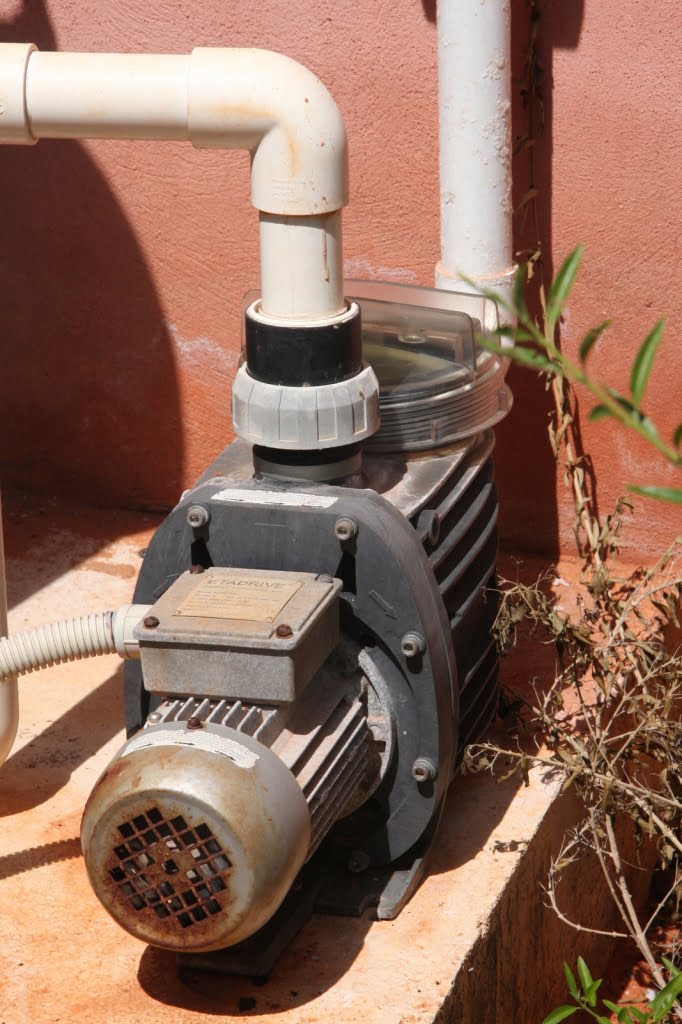 Lorentz Badu pump after seven years. It runs on 48 volts dc and pumps about 35,000 litres a day using four dedicated 120 watt solar modules. The apparent rust is the Kimberley's Pindan sand that stains everything it touches.

The pump drew 450 watts and was powered with ease by four dedicated 120 watt Kyocera modules installed on cyclone-proof mounts at ground level, by the Kimberley’s typical daily 8 to 10 hours of reliable sun: about 6 PSH. There being no need to recirculate water after dark removed any need for batteries.

Pumping losses were minimised by using oversize filters and piping. Subsequent testing showed that water pressure and flow were almost exactly as indicated on Lorentz’s graphs.

Pool water is normally sterilised by adding chloride directly, or by passing lots of amps through salt water to produce chloride. The former did not appeal and the latter required too much power.

Thinking laterally resulted in the existing irrigation system’s daily water flow being diverted to flow via the pool. This was done via a valve that opened 30 minutes each day. About 2000 litres or so flows into one end of the pool. A 50 mm pipe runs from close to the bottom of the pool’s other end and extends vertically to normal water level, where it then runs horizontally for about 30 centimetres, and then down into the existing irrigation system (see sketch below).

When the valve opens, water rises to the horizontal section and then down and into the irrigation system over the course of the following two to three hours. The horizontal pipe has an essential air breather hole opening in its upper surface to allow air to enter (without it, once water starts flowing, it continues to syphon until the pool runs dry). This technique required so little chloride that it did not bother the then irrigated plants.
This system was installed in 2003. At the time of selling the property, in August 2010, the pump needed new bearings but nothing otherwise required changing or modifying. Feel free to copy it (nothing has been or will be patented). Hundreds now have (but do please acknowledge its source).

To cope with pool cleaning etc, the pump normally used in domestic pools is about four times larger than needed for circulation. To save energy, some installations have a large pump for cleaning, and a second smaller one for circulation.
A more elegant solution is one of the range of high efficiency pumps that are variable speed (230 volt) versions of the 48 volt Badu pump. The Badu EcoM3-Speed brushless dc motor swimming pool pump has three main switched ranges, each providing variable speed control. The overall range is from 1000 to 3450 rpm and suitable for pools from 25,000-85,000 litres. 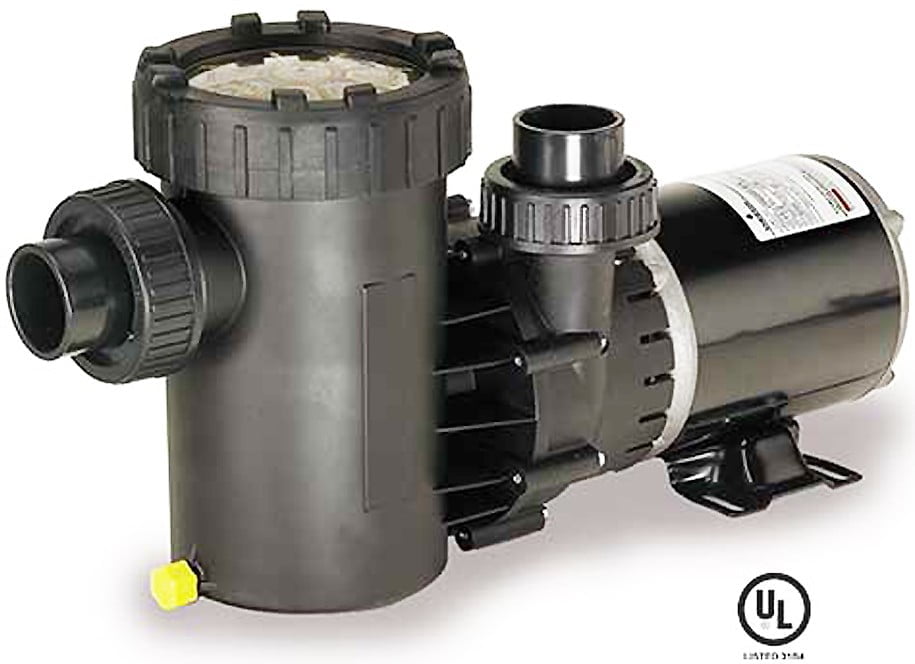 Davey’s PowerMaster ECO is an (eight star) efficient pool pump. It has a three speed ‘intelligent’ control for pool water circulation and filtration, automatic pool cleaning, and a high flow option for all other tasks. The maker claims it uses up to 70% less energy than traditional pool pumps. The various makers claim reduced operating costs of up to 80%, lower energy usage, and reduced noise, but whilst more sophisticated, none appears to compete price-wise with that very low cost, all solar system in Broome. The Broome pool. The four 120 watt solar array can just be seen low down at the far (northern) end of the pool. The water nearby is a tidal lagoon - that further back is the Indian Ocean. (The auto water level pipe is at pool right.) Pic: Author 2007.