Wheels falling off trailers – and how to stop it happening

Wheels fall off trailers, their wheel studs break or wheel nuts loosen. Trailer wheel bearings need ongoing replacement. Stub axles may fracture. Next to none of this, however, occurs with the tow vehicles. Here is why it happens, and how to prevent it.

That fastenings such as wheel nuts may be caused, not just permitted, to loosen is rarely covered in engineering training. The causes and prevention are, however, known. This referenced article by Collyn Rivers explains how, why and how to prevent it.

The thread of a screw fastening must have some side clearance to enable the nut (or stud) to be turned. Tightening, however, causes the stud to stretch slightly. This marginally decreases its diameter, thus increasing inter-thread clearance. Inter-thread friction normally prevents or limits sideways movement between the threads.  As the thread is spiral and in tension, momentarily relaxing the frictional contact may cause the fastening to ‘ratchet’ itself undone. Overtightening worsens this as it further decreases thread diameter – thereby increasing the interthread gap. Wheels fall off trailers because of this.

To see this happens, hold (by its head and pointing downwards) a large-diameter clean dry coarse-threaded bolt, with a loose nut. While stationary, the nut (restrained by minor inter-thread friction) stays where it is. If shaken from side to side, however, gravity will cause the nut to unwind. With a similar bolt and nut under tension, repetitive sideways movement above a certain force will likewise ‘ratchet’ that nut loose.

This can happen with wheel nuts or studs. As the wheels encounter bumps and pot-holes, shock loads impact the wheel studs. Unless correctly tightened or somehow restrained, the studs or nuts may work loose. The stub axle sheered off this tour group’s trailer on the corrugated track road to the tip of Cape York. It had no shock absorbers, nor provision for fitting them. The OKA in the distance belonged to the author. Pic: Author.

Why wheels fall of trailers – but rarely off whatever tows them

Fastenings mainly loosen where there are repeated side shocks. It also occurs where bolted assemblies bend. etc. It happens particularly with wheel studs and nuts and is usually why wheels fall off.

Far more wheels fall off travel trailers and camper trailers than ever from cars. Wrecked trailers with wheels torn off, or stub axles broken, litter mainly corrugated outback tracks. It does not, however, affect all trailers. If you inspect them you will find that almost all not just lack shock absorbers – most lack provision for fitting them.

The effect of not having shock absorbers

A wheel encountering corrugation (etc) is thrust upward. This compresses the spring. Inter-leaf friction absorbs a small part of the impact on the upward movement. Most, however, remains (as elastic energy) in that spring. Once over the bump, the now unrestrained spring jackhammers the wheel and axle downward. The wheel strikes the road with huge force. The resultant shock load (proportional to the wheels and axle’s mass and the square of their velocity) is now taken via the unfortunate wheel studs.

This issue is at its worst on corrugated roads. These typically have about 1100 plus corrugations per kilometre: 1000 km of corrugation imparts over one million hammer-like blows. All via those studs. Once the stud or nut works even slightly loose. Impact forces may then shear the studs in half. Such repeated shock loads also wreck wheel bearings. Furthermore, they may eventually cause stub axles to break.

This rarely happens with tow vehicles. All have shock absorbers, and even if badly worn most retain at least some damping effect. Much as firing an arrow into water, shock absorbers absorb and dissipate energy. They convert much of the springs released elastic energy into heat. The vehicle tyres also dissipate such energy. 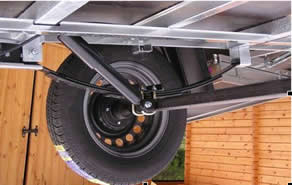 The omission of shock absorbers on trailers (and consequent problems) is confined mostly to Australia. The above is an ultra-cheap but well-engineered Finnish garden trailer that has such large shock absorbers as standard. Pic: rvbooks.com.au.

Friction shock absorbers were fitted to cars as early as 1905. They had them despite travelling at low speed and thus incurring far lower forces. If a trailer maker says shock absorbers are not needed, buy from somewhere else.

Some trailers but rarely travel trailers have springs so stiff there’s little movement to dampen. The springs may not break but the trailer contents take a beating. Furthermore, wheel studs and stub axles are more likely to shear.

1. Clean threads thoroughly. Ensure nuts are free to spin along the stud’s full threaded length. Discard any that do not. Never use a nut or stud that is or has been corroded. Studs and nuts need to be totally clean and dry.

2. Locate the wheel on the studs. Finger-tighten using a diagonal sequence. Give the wheel a few wriggles to allow correct location.

4. Use a torque wrench for final tightening and only to vehicle maker’s specifications. Never exceed specified tightness. That ‘more is better’ is counter-productive – it stretches the thread, thereby reducing its diameter – and hence the gap between the threads.

5. Recheck after 50 km and a further 100 km. If further re-tightening is needed, whatever is being clamped is under-engineered and bending. This occurs with U-bolt axle clamping plates on early OKAs. Any such issue needs urgent fixing by an engineer. If really seeking a belt and braces approach, apply Loctite 290 after the final bedding down. See below re how it works.

If employing a tyre fitter, insist beforehand that a torque wrench be used for final tightening to the vehicle maker’s specification (most include that in the instruction manual).

Never allow anyone to use a rattle gun for this: the risk of serious risk over-tightening is high. Ideally, have a high-quality torque wrench and insist on doing the final tightening yourself.

Insist on the above. Many mechanics and tyre fitters believe they can ‘feel’ correct tension. Extensive research shows that few can do so. Tests (conducted by Vauxhall/Bedfords Research) show variations of plus/minus 30%..

If there is no inter-thread gap, no side movement is possible. There is hence little likelihood of such threaded fastenings undoing. Rather than ‘glueing’ threads together, Loctite (and similar products) thus expand. They fill the gap between threads. This specifically precludes sideways movement – that enables, or causes, undoing.

The specialised Loctite 290 product is designed for fastenings that subsequent re-tightening (e.g. wheel and U-bolt nuts). It is applied after the initial re-tightening period. It is a self-wicking fluid that works its way between even horizontal threads. As the product effectively precludes nut unwinding, further torque checks are (claimed to be) unnecessary. It must, however, be reapplied after wheel changes.

This product is also used to prevent catastrophic failures. It is thus used in aircraft, and also roller coasters. It even prevents jackhammers from falling apart.

Even without Loctite, in over 500,000 km and fifty years of mostly off-bitumen driving, I have yet to have a wheel nut even loosen. Let alone fall off. And that includes twice across Africa, and a now fourteen return trips across Australia from Sydney to Broome, mainly on corrugated dirt tracks via Alice Springs. All I do is to tighten, via a torque wrench, to the amount the vehicle maker advises. And use truly high-quality shock absorbers.

Rattle guns are prone to over tighten, thereby stretching the stud. This reduces its diameter, thus increasing inter-thread spacing. This alone causes studs to crack and/or sheer off. The fastener and automobile industries emphasise that wheel nuts and studs must never be finally tightened by rattle guns (impact wrenches). They insist that such tightening may only be done via a high-quality torque wrench. This wrench must have known accuracy. It must tighten to vehicle manufacturer’s specified amounts.

Recheck (and tighten if necessary) after 50-100 km. And again after 1000 km. But many tyre fitters sadly ‘know better’. They use only rattle guns.

If you use a lubricant (most authorities recommend against it) you must reduce tightening torque by about 20%. Do not use anti-seize materials, for any but totally static applications. Their intended role is easing undoing.

Here’s what the Caravan Council of Australia says about it.

‘The CCA continually receives reports of broken wheel studs, and loose wheel nuts… sometimes with the nuts unwinding completely off the studs.

It must be stressed that if a stud breaks, it is certainly no proof that the stud itself was faulty. There are a number of reasons for the problems.

‘All supplied instructions regarding wheels and wheel nuts must be precisely followed.

Clearly, all nuts must be tightened to the correct torque, and in the correct pattern, in strict accordance with the instructions provided by the wheel or chassis manufacturer.

It is strongly recommended that pencil lines are made on one face of each nut – with a mating line on the wheel – so that a quick visual inspection can detect any loosening of a nut.  Clip-on plastic “indicators” – fitted to each nut, with their adjacent “arrow-heads” aligned – provide an even-quicker warning of any nut loosening.

Continual vibrations – and occasional heavy impacts – from road surfaces, inevitably have an adverse effect on the wheel assemblies.

This is severely aggravated if the tyre pressures – and the spring rates – are too high for the actual wheel-loading.

Stresses on the wheel assemblies are further increased if shock-absorbers (dampers) are not fitted.

Our published books are written much like this article. They are technically competent but in plain English. They include the Caravan & Motorhome Book, the Caravan & Motorhome Electrics and the Camper Trailer Book. Solar is covered in Solar That Really Works – for cabins and RVs. Solar Success is for homes and properties. For information about the author please Click on Bio.