Batteries are a nuisance but whilst diesel can be used for cooking and heating, lighting and TV etc., requires electrical energy stored in batteries. This AGM battery is suitable for starter and also auxiliary use. Pic: TRP.

Conventional batteries store energy as an electro-chemical reaction between lead plates and a solution of water and acid (electrolyte. With some such batteries that electrolyte is in gel-like form, or (with AGMs) within a matrix.

All batteries are charged by applying a voltage (electrical pressure) across it that is greater than it already has. This causes a reaction between the lead plates and the electrolyte that changes the nature of that electrolyte.

Starter motors draw a lot of current (up to 500 amps) but for only two to three seconds. This may seem a lot of energy but is actually a very small amount – about that drawn by a 4 watt LED globe during one hour. The vehicle’s alternator replaces this within a minute or two. It does not need that much energy to start a car engine. Pic: Henry Ford collection.

Starter batteries are rated in CCA (Cold-Cranking Amps). In temperate climates a petrol engine needs about 80-90 CCA per litre of engine size. A diesel needs twice that.

Don’t buy more CCA than you need – doing so is like buying a Mack truck to do the shopping. Instead, buy the physically largest battery (with the recommended CCA) that will fit in the battery tray. Its size and weight gives some indication of how many consecutive times in a row it can start the engine.

That ability is called Reserve Capacity and the larger and heavier the battery the greater its ability to do so.

Lead acid auxiliary batteries (for lighting and running electric fridges etc.) are misleadingly called deep-cycle batteries. They are like marathon runners in that they operate at relatively small amounts of power, but can exert energy for many hours.

The name for these batteries can mislead: ‘deep-cycle’ suggests they can be repeatedly and deeply discharged without harm. They cannot. Their makers recommend discharging only to 50% but few users follow this.

Most run them down until their lights go dim and the beer warms up in the fridge. Doing this results in available battery capacity being progressively lost.

In practice a conventional deep-cycle lead acid battery can be cycled 500-800 times if not discharged often below 50%. But if repeatedly discharged to (say) 20% remaining, it may only last 50-80 cycles.

Deep-cycle batteries are rated in amp hours. One amp hour is a current flow of one amp that flows for one hour. Whilst lithium-ion batteries are less affected, the amount of current you can draw at any time depends on the battery size and the rate at which you do so. Battery makers usually rate their product at that which fully discharges it in 20 hours – even though you should never actually do that.

As an example, a 100 amp hour deep cycle battery is fully charged and/or fully discharged by charging or discharging at 5.0 amps for 20 hours. It is likely to deliver 10 amps for about ten hours, but if feeding a microwave oven at its typical 130 amps or so draw, it is unlikely to do so for more than 10-15 minutes because its voltage will fall too low to sustain the load. Contrary to common belief its remaining capacity is still available – but at a lower rate of current draw.

Routinely deep discharging or overloading shortens a lead acid deep cycle battery’s life. Doing so, however, is unlikely to damage most electrical stuff (most fridges cut out when voltage drops too low). Water pumps, however, rely on flow for cooling and may burn out if voltage is too low.

AGM (Absorbed Glass Mat) batteries were originally developed for military equipment that only needed to be used at long intervals. They have many thin plates and electrolyte within glass-fibre matrixes in sealed and pressurised cells. They have vents that open if the pressure becomes too high so still need ventilation. A plus for auxiliary use is their ability to charge fast and to 100%. Some are suitable for starter battery and auxiliary use, but most makers offer specific units for each purpose. These batteries are about 20% bigger and heavier, and cost more than other batteries of the same nominal capacity. They typically retain 50-60% charge for a year or more. As long as initially fully charged they can be left unused for a year or so (in temperate climates).

AGM batteries do not need float charging – in fact float charging may damage them as it not usually possible to reduce the charging rate to the tiny amount needed.

Gel cells predate AGM batteries. Their electrolyte is mixed with silica to form a candle-wax like gel. As with AGMs, gel cells are bigger, heavier, and cost more than conventional deep-cycle batteries but partially compensated by a higher usable capacity. As a generalisation, AGMs are better suited for off-road use. They are physically more rugged.

For their size and weight, the commonly used LiFePO4 version of these batteries hold three to four times more energy than lead acid starter or deep cycle batteries.

These batteries can be charged and discharged at very much higher rates with no apparent damage. Unlike most others, they maintain close to a constant voltage (of about 13.1-12.9 volts) under load until about 80% discharged.

LiFeP04 batteries must have a cell management systems to ensure all are equally charged, and that their voltage etc. is not exceeded. They have specific charging routines that are rarely included in general purpose chargers. A specialised charger is often offered as part of the battery package. 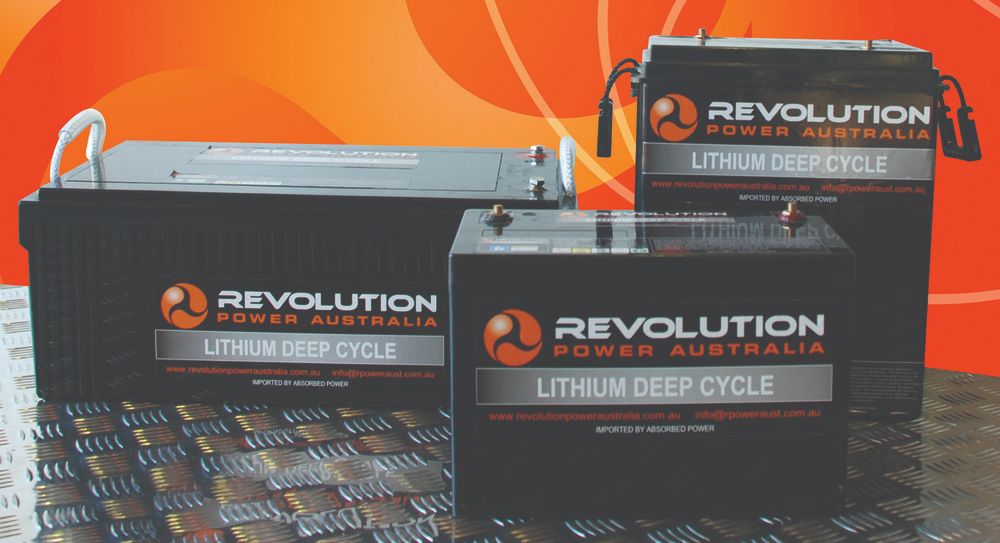 They are (currently) more costly than AGMs and gel cells, but that is partly offset by their ability to use most of their nominal capacity, and a claimed longer working life.

Even now (2018) only limited industry-sourced information relating to their camper trailer or RV usage is available, but there is a lot of (not always reliable) discussion on Internet forums.

It seems inevitable that these or similar batteries will replace conventional batteries in many uses. They have been optionally provided by Kimberley Kamper since 2010 onward, and some were used prior to that by early innovators in the caravan and motor home field. This situation is changing fast, and this section is almost certain to need revising in subsequent editions of this book.

Locating an auxiliary battery in the tow vehicle may require compromise. No battery appreciates heat – it shortens its life. The only feasible place may be under the tow vehicle’s bonnet, but if so, everything possible must be done to shield it from the extreme heat of the exhaust pipe and even more so of a turbo-charger.

If a battery has to be located in the open, protect it from direct sun.

There are no RV industry standards for ventilating batteries, but most battery makers warn it is essential – including for sealed batteries. 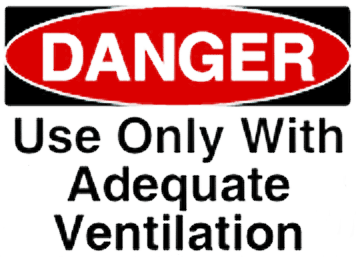 It is common to this sign on a trailer battery in an unventilated space!

Despite warning notices regarding this, and often on the very batteries they install, some caravan and camper trailer builders argue that is quite safe to locate them in unventilated areas. But, as in matters relating to suspension, many a trailer builder ‘knows better’.

The risk (of explosion) is lower than with unsealed batteries, but even if the battery is a sealed unit, ventilation is still required. This because if an internal fault causes the battery to heat up and generate excess internal pressure, safety vents open and release potentially explosive hydrogen.

Australia’s Clean Energy Council suggest that a 50 mm diameter hole, or a slot of equivalent area at the very top and the very bottom, at diagonally opposite corners, and open to atmosphere, should be adequate. If the trailer maker resists, either insist that ventilation be provided (if necessary by pointing out the warning likely to be on the very battery in question), or do it yourself.

Some people (particularly on Internet forums) claim they never have battery problems, and that they run fridges and lights for days on end without even an auxiliary battery. In so doing, they defy the more fundamental laws of physics. Investigation invariably shows that not all is revealed. One owner, who claimed to be able to run his fridge for several weeks by charging the 100 Ah battery before leaving home, eventually admitted he ran the car engine for an hour or two each night. He then claimed that he was ‘exercising’ the battery, not charging it. (‘It is like taking my dog out for walk’, he said). And continued to argue in that vein.

Another claimed for several weeks to run a 120 litre chest fridge in hot places for about three days from an ancient 80 Ah battery. Only after repeated questioning did he reveal he always started off with the chest fridge full of ice.

A really big starter battery may just cope with overnight needs but it is not clever to rely on this even for lighting, let alone a fridge, especially if you travel in remote areas. Use an auxiliary battery. If you plan to camp away from grid power. Despite some RV maker’s claims, unventilated lead-acid batteries can and do explode! Pic: Vinland.