The Camper Trailer Book – Chapter  3: What can be towed where

The terms ‘off-road’ and ‘what can be towed where’ are often used by vendors to describe three-lane dirt highways and vast areas where no tracks exist at all. Such usage can seriously mislead. It is not uncommon for trailers barely able to traverse short dirt tracks to be labelled as being ‘off-road’. The more-serious off-road going can damage and possibly wreck ‘on-road’ vehicles.

To experienced owners, ‘off-road’ is to some extent an issue of familiarity. An outback school bus route may thus be routine to its driver. It is an adventure, however, for a first-time camper trailer or 4WD owner – even on mildly rough dirt. Think hard about whether you are truly going to drive extensively off-road: or just ‘like the idea’. Travelling long distances off-road is dirty, uncomfortable (and initially at least) scary. Consider hiring initially, or travel with a small tour group, to assess what it is like.

What can be towed where? – corrugation

Most newcomers and vendors refer to travelling on corrugated roads as ‘off-road’ but in reality, the corrugation is totally routine in outback driving. It is sometimes truly bad. The surface is not corrugated but also formed of ball-like hard dirt.

There are really only two speeds at which it is really feasible to drive over long-distance corrugated roads. One is 10-15 km/h (6-0 mph). The other is 70-80 km/h (37-50 mph). Most drivers use the faster speed, but many seem unaware that they are, in effect, driving over loose dirt. Particular care is thus needed when braking and cornering.

What can be towed where? – typical tracks

Many of Australia’s inland and coastal dirt tracks are in reality two and three-lane dirt highways. These include the Birdsville, Oodnadatta, and Strzelecki tracks, the Cape Leveque road and the Gibb River Road.

The Plenty Highway (across central Qld) and the Tanami from Alice Springs to Halls Creek are the only major tracks across the Centre from east to west. The western part of the 1000 km Tanami Road was still rugged in 2020, but is being progressively bitumenised.

Some so-called ‘soft’ 4WDs and lighter camper trailers (still likely to be-called ‘off-road’ by their makers), can, with care, cope with a few trips along tracks such as the above, but many of today’s otherwise suitable tow vehicles have too little ground clearance to do so without being damaged.

What can be towed where? – truly off-road

This includes tracks like the lesser used of Len Beadell’s ‘bomb roads’ in north and central Western Australia. These may have one or two vehicles a day, but on the 1100 km Talavera track it is rare to meet any traffic at all during the three days required. Truly off-road also includes the Old Telegraph Track (but not its by-pass road) and much of the top of Cape York. 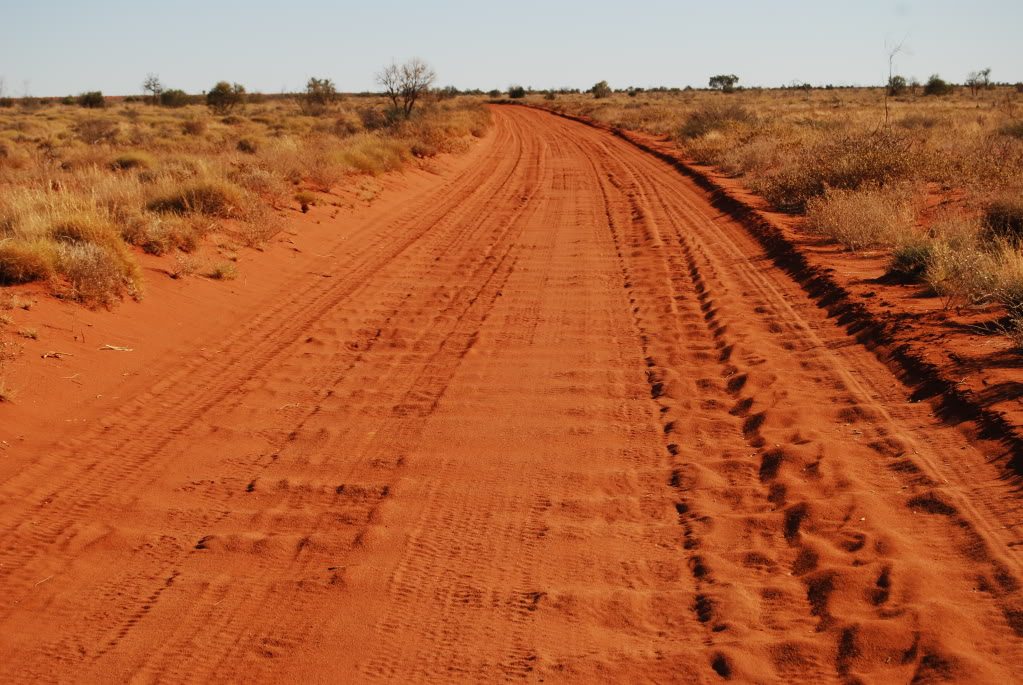 Typical corrugated road – this one is in the Kimberley. Pic: RV Books.

Whilst officially discouraged, people do take camper trailers down the 1400 km Canning Stock Route, and along the Simpson’s 1200 km Rig Road. Both have deep sandy stretches and vast stretches of corrugation, plus steep sand dunes. Both are serious going: such tracks are definitely not advisable for newcomers. All demand a fully off-road vehicle with low range transfer box: good ground clearance and long-range fuel tanks (definitely not an SUV).

The Canning Stock Route, in particular, tends to show up vehicle problems. One major European 4WD maker learned this the hard way. It needed helicopter assistance to supply replacement suspension components for its test fleet of up-market 4WDs.

My wife and I had no problems completing three return Broome/east coast return trips across the centre of Australia almost totally on tracks such as the above. We did those with our (2005) 4.2 litre Nissan Patrol and Tvan. Nor did we have any problems during ten return such trips in our OKA. Not bogged, here Collyn is reducing tyres pressures prior to travelling over plus 500 km (approx 310 miles) of sand like this. Pic: RV Books.

Unless truly experienced, however, such routes are best tackled together with another well-equipped vehicle, or as part of a tour group. (I had previously driven twice the length and breadth of Africa, including the plus 3000 km Sahara crossings, so am well and truly used to driving on soft sand).

Fully off-road camper trailers vary a great deal in weight. Two of the best (TVan and Ultimate) are 800-900 kg (1750-2000 lb). Others of much the same size are over 1500 kg (3300 lb). At least one is over two tonnes. Such weight causes problems in soft going: they are hard to retrieve if bogged and limited in their choice of tow vehicles.

Having travelled most of Australia’s more iconic off-road tracks in an under 1000 kg (laden) TVan camper trailer pulled by a well equipped 4.2 litre TD Nissan Patrol, we found even that by no means easy in heavy going. I would personally hesitate to tow anything over 1300 kg (2870 lb) across soft sand for other than short distances.

Most high-quality camper trailers hold their price very well. Buying an on-road camper trailer, and then realising you really wanted to go off-road is thus not a huge problem if you sell it before taking it off-road. Buying an off-road camper trailer and then using it only on-road is not a major problem either. It is just stronger than you need. As with caravans, they have good second-hand value. In both situations, however, you may end up with a tow vehicle that is no longer appropriate for your changed need. And these depreciate the moment you take them out of the dealer’s showroom. Overloading like this inevitably results in any manner of breakdowns. Pic: RV Books.