Microwave oven power draw is far greater than many users think. In this article, RV Books’ Collyn Rivers explains why – and how. This is a particular problem in caravans and motorhomes. Their deep-cycle lead-acid batteries cannot sustain the energy draw they require. AGM and lithium batteries are thus better suited.

A typical caravan or motorhome’s microwave oven is rated at 800 watts, but in terms of heat produced, not power draw). As most are only 50% efficient, that 800-watt microwave oven’s power draw is about 1200 watts.

Microwave oven power draw is also increased by losses within the inverter used to drive it. Inverters vary in efficiency. Some old ones are only 75% efficient, and thus best taken to the tip. The better current ones are 85%-90% efficient. Because of inverter losses, total microwave oven draw may thus be 1330 to 1600 watts. If run from 12 volts that’s 110-133 amps. 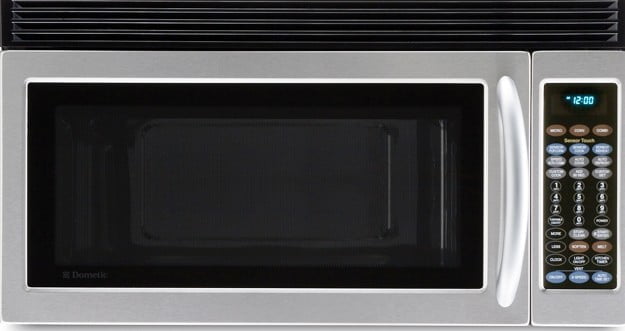 The amount of energy a microwave oven uses is proportional to its heat setting, and also to time. If run for 15 minutes at full heat, a 12 volt (800 watts) such oven will, via an inverter, draw 25 to 33 amp-hours. This may not seem much if you have a 150 amp-hour lead-acid battery, but it cannot do so for long. When high current is drawn, battery voltage consequently falls. It may fall too low to sustain that load. That may happen even with a battery still that’s still well charged. It may recover after resting but will not accept such high draw for long. The battery’s remaining capacity, however, is still there. It can readily be accessed used – but at a lower current draw.

To power an RV microwave oven, you really need at least a 250 amp-hour (12 volts) preferably AGM battery. Or about 100 amp hour of lithium (LiFePO4) batteries. It can be done from 150 – 200 amp hour deep cycle lead-acid batteries, but not for long at a time. Such high draw also shortens lead-acid battery life.

Ideally, confine extensive caravan and motorhome microwave use to the grid or generator power.