Here is some information for those who are occasional motor-homers, who live in a built-up area, and are considering changing to a different motorhome, or who are considering making some improvements to their present one. It would have helped me greatly if I had had such a summary a few years ago. Australian Design Regulations (ADR, Ref 1 ), Australian Vehicle Standards Rules (AVSR, Ref 2) and Australian Road Rules (ARR, Ref 3) for motor vehicles are the primary sources, since these are uniform (Ref 1) for Australia or are model rules (Refs 2, 3) adopted by the states and territories. It is also important to observe that a plethora of Australian Standards may also impact on changes you are considering.

Your normal driver’s licence (‘Class C’) allows you to drive vehicles up to 4.5 tonnes gross vehicle mass (GVM, the maximum recommended weight a vehicle can be when loaded). A Light Rigid 'Class LR' licence is required for a vehicle with a GVM of more than 4.5 tonnes but not more than 8 tonnes. There are also ‘Class MR’ and ‘Class HR’ licences for even larger vehicles. See e.g. Ref 4. Comment: To use a normal driver’s licence, the motorhome must not have a GVM of more than 4.5 tonnes. You should know the GVM of your vehicle, and the actual laden weight established by taking it to a weighbridge when set up for typical travel. The handling and safety of a vehicle is greatly affected by its weight, particularly its ability to stop quickly. In the event of an accident your insurance would likely be void if it was found that the vehicle was overweight. Driving a larger vehicle also requires enhanced skills such as correct selection of gears going up and down hills, and tracking around cocaravanners — not hard to learn, but essential for safe travel.

There are significant parking restrictions for larger vehicles and those over 4.5 tonnes. Division 6, Part 12 of Ref 3 notes for Rule 200: (2) The driver of a heavy vehicle, or long vehicle, must not stop on a length of road in a built-up area for longer than one hour, unless the driver is permitted to stop on the length of road for longer than one hour by information on or with a traffic control device, or is permitted to do so by the council.| (3)  HEAVY VEHICLE - means, a vehicle with a GVM of 4.5 tonnes or more; LONG VEHICLE - means, a vehicle that, together with any load projection, is 7.5 metres long, or longer; ROAD - does not include a road related area, but includes any shoulder of the road. ‘Built-up area’ is defined in the dictionary.  There are restrictions in parking in a Built-Up Area. Comment: This is a good reason to keep the GVM of the motorhome to no more than 4.5 tonnes: you can legally park it in the street of your suburb and in other towns. Annual registration and third party insurance costs increase considerably for larger vehicles.

Rule 43/01, Sec 43.4.5.1 of Ref 1 notes (1)  A vehicle must not be over 2500 mm wide (including any load projection). (2)  For subclause (1), the width of a vehicle is measured without taking into account any anti-skid device mounted on wheels, central tyre inflation systems, lights, mirrors, reflectors, signalling devices and tyre pressure gauges.  Overall vehicle width includes 'load projections' such as awnings but not mirrors. Comment: Not all motorhomes on Australian roads begin their life complying with this requirement. See also ‘Load Projection’. 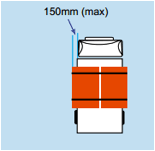 Rule 43, Sec 43.5.1 of Ref 1 also notes For vehicles any 'Equipment' shall not project more than 1200 mm from the 'Front End' or 'Rear End’.  Defining Load Projection at the front (from Ref 5, © VicRoads with permission). From Ref , anything added to increase the overall width of the vehicle must be less than 150 mm in width. This Rule is an extension of AVSR (Ref 2) and has been adopted by most Jurisdictions.  Defining Side Load Projection (from Ref 5, © VicRoads with permission). Comment: A common problem here is that an awning mounted on the side of a large motorhome takes it over the legal width of 2500 mm. A Porta Bote, mounted on the side of my Ducato motor camper, projects less than 140 mm (including brackets), and the overall width is still less than 2500 mm, so is legal. Figure 6 shows the rig on tour.

Rule 43/03, Sec 6.2.3 of Ref 1 states: 6.2.3. For all other motor vehicles and trailers (other than ‘Semi-trailers’) the ‘Rear Overhang’ must not exceed 60 per cent of the distance from the centreline of the front ‘Axle’ to the line from which ‘Rear Overhang’ is measured, or 3.7 metres whichever is the lesser. The Load Projection (if any) is included in this calculation. . Defining Rear Overhang (R/OH) relative to Wheelbase (WB) (from Ref 5, © VicRoads with permission). Comment: This requirement causes lots of grief for those wanting to mount tool boxes or motorcycle carriers on the back of motorhomes that already have substantial rear overhang (let alone the structural engineering issues). A carrier must either be folded into a vertical position or removed entirely when not being used to carry a bicycle or motorcycle and any loading ramp must only deploy to the left hand side of the vehicle. For my Ducato, the wheelbase is 3700 mm so the maximum legal overhang is 2220 mm. The overhang of the body is 998 mm, so the maximum overhang of any additional equipment is restricted to the Load Projection Rule of 1200 mm. My bicycle mounting method complies: the bicycles overhang by 920 mm and the carriers fold up when not in use.   My A’van Applause on Ducato with side load and rear loads. 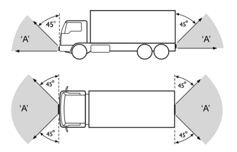 The following Figure (Fig 7) and Clause are from Ref 6. Clause 61(2)(c) of Schedule 2 of the Regulation requires that a number-plate must be visible at a distance of 20 metres from it and within all the areas described by an arc extending at an angle 45° above the top of the number-plate and 45° forward of its edges.  Number plate visibility requirements (from Ref 6, NSW Roads and Maritime Services with permission). Comment: The number plate must not be hidden by bicycles etc., mounted on the back of the motorhome. My rig is compliant with one bicycle mounted, but perhaps not so with two (see Figure 6); a bicycle rack number plate may be necessary. 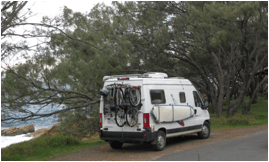 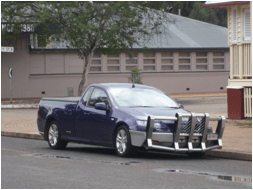 Adding a bull bar to a motorhome is a popular modification, but is fraught with problems. As explained in the Queensland regulations, Ref 7 Bull bars must be free of sharp protrusions and all exposed sections of the bull bar and fittings must be radiused and deburred. Forward and side members should be designed to reduce the risk of injury to any person who may come into contact with the bull bar.  A potentially dangerous bull bar on a vehicle in St George, Q’ld (7 Oct 2011). Vehicles fitted with an airbag or manufactured to comply with ADR 69 - Full Frontal Impact Occupant Protection or both ADR 69 and ADR 73 – Offset Frontal Impact Protection, can only be fitted with a bull bar which: • has been certified by the vehicle manufacturer as suitable for that vehicle or • has been demonstrated by the bull bar manufacturer to not adversely affect compliance with the ADRs or interfere with the critical airbag timing mechanism, as the case may be. Comment: A bull bar is commonly fitted to protect the vehicle against animal strikes. It is far more important not to compromise the safety of the vehicle and occupants in the event of a crash. Finding a bull bar that is certified as compatible with the airbag timing mechanisms of a modern vehicle is a challenge! The danger from a bull bar to pedestrians is also important.

Rule 44/02 of Ref 1 states (Clause 44.8.2) that …liquefied petroleum gas installations in motorhomes and travel trailers shall comply with the requirements of “Code Governing the Installation in Travel Trailers of Liquified Petroleum Gas Equipment and Appliances”, issued by the Australian Liquified Petroleum Gas Association. The Rule gives legal force to the relevant parts of Standard AS/NZS 560.2.2010 – Gas Installations. Changes to the electrical installation are also subject to Australian Standards. In some States these are mandated with legal force. From Ref 8 The electrical installation in your motorhome or travel trailer must be undertaken and certified by a registered electrical worker in accordance with Australian Standard 3001 and issued with a Certificate of Compliance. Comment: There appears to be some confusion in some jurisdictions (Victoria in particular) about the legal force behind Australian Standard 3001 for motorhomes and travel trailers. For safety’s sake, there should be no doubt!

If you want to read more about my experiences with my Ducato A’van Applause 500 motor camper, see http://manins.net.au/motorhome/sitemap.html. Happy travelling!

Words, photographs and illustrations, except as otherwise credited, by Peter Manins.